Oh god, this thing is a beast of an upgrade card.  It does strange things and required a FAQ from pretty much the moment it was announced, and even after the FAQ it isn't 100% clear exactly how it should work, though I will describe the basic consensus.  Anyways, here it is! 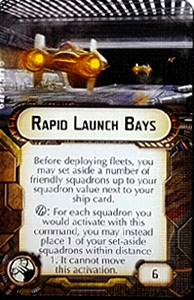 Before deploying fleets, you may set aside a number of friendly squadrons up to your squadron value next to your ship card.

Squadron Command: For each squadron you would activate with this command, you may instead place 1 of your set-aside squadrons within distance 1. It cannot move this activation.

So, in other words, the consensus ruling at the moment seems to be as follows:  Supposing you had a Squadron Value of 4, you can set aside 4 squadrons prior to deploying your fleet.  Then, when you perform a squadron command (dial), you can place your 4 squadrons (or less!) and then activate them to shoot.  Or you could place them and not activate them, allowing them to move on a later activation.  The choice is yours!

The best use for this seems to be for delivering slow fighters safely and unengaged to the fight, preferably after the enemy's interceptor force is already engaged.  B-Wings or other slow Rebel ships seem to be the most effective use for this card, though the Imperials may have some luck using this with either low hull squadrons like Interceptors, or on a Speed 3 carrier with Firesprays, as Rogue would let them move / shoot in the squadron phase after being deployed.

As this is an offensive retrofit, the following ships can utilize it:

Of these, only the Assault Frigate, ISD, and flotillas can go Speed 3, and only the Raider can make Speed 4.

It should be noted, that putting the squadrons aside for use with Rapid Launch Bay reduces your deployment advantage.

It should also be noted that you can bring a LOT of things in a Hyperspace Assault by using Rapid Launch Bay to bring in even more fighters over and above the 3 the objective will let you bring.
Incoming Transmission From: Biggs at 08:00
Email ThisBlogThis!Share to TwitterShare to FacebookShare to Pinterest
Labels: List Building, Offensive Retrofit Upgrades, Wave 5