On to "the reason you took a Pelta".  It is the Fleet Command Upgrades; support upgrades that you put on a slightly over-costed ship that make the rest of your fleet better.  The upgrades that make Imperials irrationally angry over Wave 5.

Please note that with the most recent FAQ, if the ship that this upgrade on is destroyed, all ships still gain the benefit of the upgrade until the end of the round. 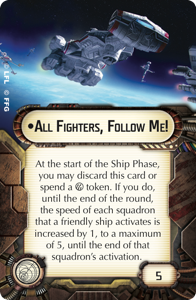 At the start of the Ship Phase, you may discard this card or spend a Squadron token.  If you do, until the end of the round, the speed of each squadron that a friendly ship activates is increased by 1, to a maximum of 5, until the end of that squadron's activation.

This is a godsend to the Rebel squadron fleet.  Aside from the obvious uses, such as pushing your B-Wings around at a reasonable Speed 3, or making Y-Wings as fast as TIE Bombers, the real magic that it does is improve the Rebel's ability to intercept enemy targets with their fighters.

Consider the turn of approach.  Imperial squadrons tend to be around Speed 4, while Rebel squadrons tend to be around Speed 3.  Each side may or may not have brought a few Speed 5 interceptors, but by and large, this is the relative speed for the main squadrons of each side.  A smart Imperial player will see this, and set his squadrons the previous turn such that they will be able to jump into range of the Rebel fighters if he wants, but the Rebels will be unable to do the same to him.  This gives him the advantage that comes with fast fighters.

With just this card discarded, no tokens required, the Rebels threaten a single turn of Speed 4, which is more than enough to engage the enemy first, forcing the Imperial player off their game plan.

This card also combines well with the Speed 4 E-Wing, giving them effective Speed 5 range to force engagement as well as Speed 5 + 2 range to Snipe enemy squadrons!  That is a lot more range than your opponent is likely to remember that they have.  And even if they do, that is a lot of play area they have to hold their fighters back from. 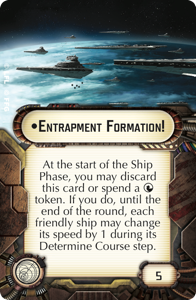 At the start of the Ship Phase, you may discard this card or spend a Navigate token.  If you do, until the end of the round, each friendly ship may change its speed by 1 during the Determine Course step.

You know what the problem is when you're spending all your effort on Navigate commands, like you are supposed to?  You miss out on all the more fun commands out there, like Squadron commands, and Concentrate Fire commands.  This is the command for the fleet that doesn't want to spend all their effort making sure they are are going the right speed each turn.  Plus, it lets you do hilarious things, like jump a CR-90 from Speed 1 to effective Speed 5 with the Entrapment Formation!, a Navigate Command, a Navigate token, and Engine Techs.

This most benefits those ships that want to be doing something else besides navigating each turn.  Carriers, that normally bank a navigate token the first turn, can either continue to do so and have more speed changing options, or bank a squadron command instead to push more things across the map.  MC30cs, which live or die based on navigation, can get away with the Concentrate Fire command they really wanted to do, and still change their speed to escape the traps their foes have set up.  Salvation, who wants to creep towards the enemy at Speed 1, and then zoom out of the fight at Speed 3, can pull this trick off with a saved Nav token, and still Concentrate Fire.

With the importance of movement on the game, this may be the most useful of the Fleet Command Upgrades for any given list. 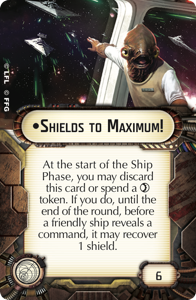 At the start of the ship phase, you may discard this card or spend an Engineering token.  If you do, until the end of the round, before a friendly ship reveals a command, it may recover 1 shield.

I know what you're going to say.  Why would we ever take this card?  It is effectively 2 engineering for whatever ship is getting attacked, assuming it survives the initial shots.  We've seen this card before in Repair Crews, and it sucks.

Well, my friend, let me tell you something.  Shields are better than hull.  Well, mostly anyways.

I know, that seems odd to see at first.  After all, shields are 2 engineering points and hull is 3 engineering points to repair.  Shields don't matter at all if your hull drops to 0.  But consider then, why does a Redirect defense token matter all at?  Because shields protect your hull.  Repair Crews aren't as good because by the time a Rebel ship takes hull damage, it's almost out of the fight anyways.  But Shields to Maximum can be utilized almost immediately.  On the first round you expect to be shot, you can begin to regenerate shields.

I know what you're going to say.  Why would we care about regenerating one shield?  We've seen that card before in Redundant Shields, and it sucks.

Well, first off Redundant Shields takes up an insanely valuable Defensive Retrofit slot, so yuck.  Second, it is more expensive than the cards you'd actually WANT to put in that slot, so double yuck.  Third off, this effect isn't tied down to one particular ship which may or may not actually have been attacked.  This is any friendly ship.  Your CR90A with Turbolaser Reroute Circuit traded fire with an ISD?  Shield recovered.  Your MC80 Liberty forced that same ISD into medium range, but took some long range fire in exchange?  Shield recovered.  Your MC80 Home One took some Yavaris'd B-Wings to the chin?  At least you got a shield back.

Want to see a way that this can be leveraged to create an almost Biggs spreading of damage throughout a fleet?  Check out my Vassal Tournament Pre-Action Report.
Incoming Transmission From: Biggs at 08:00
Email ThisBlogThis!Share to TwitterShare to FacebookShare to Pinterest
Labels: Fleet Command Upgrades, List Building, Pelta-Class, Star Wars Armada, Wave 5