Well, if I'm going to write about all the other stuff that has changed since Wave 1, I might as well talk about squadrons too.  Today we'll go over the ubiquitous and probably most well-known Rebel starfighter, the X-Wing.

How many X-Wing squadrons do you have?  You probably have 4 from the core set, plus 2 for each Rebel Fighter 1 pack.  Or you could be me with 2 core sets, 3 Fighter 1 packs and plans to buy a 4th so I can get some replacement Y-Wings since "Green" and "Yellow" squadrons broke off engines and maybe I want to run 8 A-Wings some day.  Point is, you've got quite a few.  (14, with plans for 16 in my case) 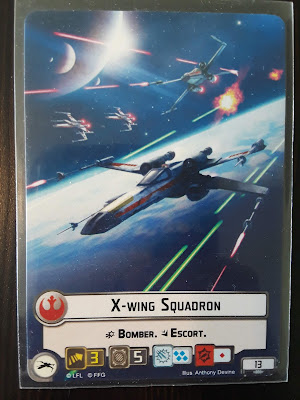 The X-Wing Squadron is the chassis on which all the unique squadrons are based off of.  13 points for the generic gives you a respectable 4 Blue dice anti-squadron, with a Bomber keyword 1 Red for anti-ship.  Only the YT-2400 and E-Wing match the anti-squadron dice for generic squadrons, and only the Z-95 is more efficient point-wise in terms of anti-squadron damage.  As for anti-ship damage, the Bomber makes it only fractionally better than the A-Wing's Black die in terms of potential damage, and worse if you look at odds of doing any damage at all.

The 5 hull the ship has is respectable, keeping it from being 1 shotted in most scenarios.  Which is good because its 3 speed is slow, almost painfully slow compared to the Speed 4 or 5 of most Imperial squadrons.  It also is one of only 2 Rebel squadrons to have the Escort keyword, allowing you to engage enemy squadrons to keep them from shooting at more valuable squadrons, and is oddly enough the faster of the two Escort options, but with less total hull.

Overall it gives you an option to Escort important squadrons, good anti-squadron shooting, and okay anti-ship for its cost.  It's nothing impressive, and spamming X-Wings - though an easy option for just about anyone to do in terms of "do I have enough physical X-Wings - is probably not going to win you many games. 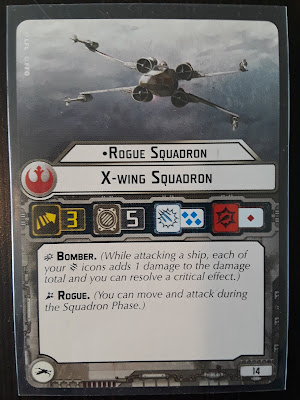 This is the exact same squadron as the generic X-Wing, but instead of having Escort it has Rogue, which in turn makes it cost 1 point more.  Appearing in the Corellian Conflict Campaign expansion, Rogue Squadron really shouldn't be compared to X-Wings though, as it is the answer to the question "I only have 14 points and I really want another YT-2400 in my list, what can I take instead?"

Compared to the YT-2400, you're giving up 1 speed and 1 hull to get a more unreliable Red Bomber die and save 2 points.  In a world where Kallus exists, you're also "downgrading" to a uniquely named squadron.  Is it worth grabbing Rogue Squadron over a YT-2400?  That is ultimately up to you, and whether you need the extra 2 points or if you need another Bomber in your list. 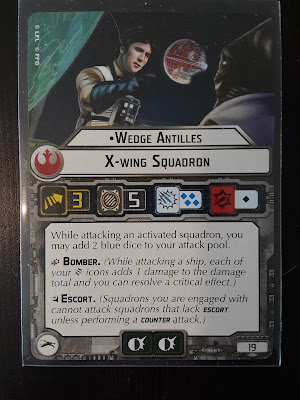 Wedge Antilles comes from the Rebel Squadron Pack 1, as the Rebel X-Wing Ace.  Wedge's stat line is in almost all ways identical to the generic X-Wing except that he costs 6 points more, adds a pair of Braces, and upgrades the Red Bomber die to a Black Bomber die.  This is not a particularly efficient stat line, if it wasn't for his special ability:

"When attacking an activated squadron, you may add 2 Blue dice to your attack pool."

This makes Wedge, if he is attacking a squadron that has already activated, the best rebel single anti-squadron attack in the game, and arguably the best period.  He will average 3.0 damage per attack (6 blue dice at .5 average damage - Vader averages 3.25) and 1.5 accuracy results. (6 blue dice at .25 average damage - Vader averages .75)  That being said, the Escort keyword works against him here.  Your biggest gun is forcing the enemy to attack him, and there's probably nothing you would rather he be protecting.

Also, you have to use him after other squadrons have gone to get this effect.  That means activating him late, or finding some way to lock out enemy squadrons first like with Dutch or Flechette Torpedoes. 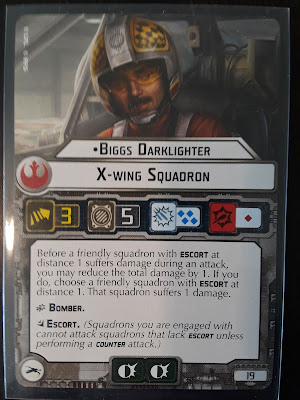 Biggs and generic X-Wings or YT-1300s are frequently seen together, usually with Jan Ors giving them better defense, to the point where Biggs, 2 Escorts and Jan Ors are frequently referred to as a "Biggs Ball".

Note:  You cannot choose a Rieekan destroyed squadron to move Biggs damage to. 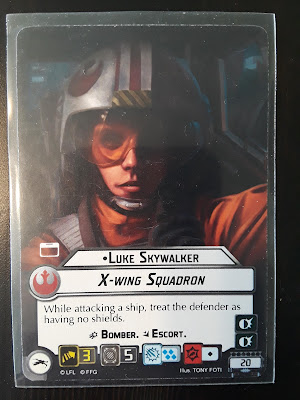 The bane of small base ships everywhere, a well placed Luke Skywalker can pop a 4 hull ship in 2 attacks if he is allowed to.  Like Wedge, Luke adds a pair of braces and upgrades the Red Bomber die for a Black Bomber die.  But where Wedge was all about anti-squadron, Luke is all about anti-ship.  "While attacking a ship, treat the defender as having no shields" means that your damage is going straight to hull damage, terrorizing MC30c's and CR90's who can be splatted with 2 really good rolls.

Unfortunately, like with Wedge, Luke's Escort keyword is almost more of a harm than a help, as it means your opponent is encouraged to focus him down instead of your other squadrons.

Note:  Luke's ability does not affect the resolution of the "Projector Misaligned" or "Shield Failure" damage card affects, but DOES ignore your opponent's shields if you are trying to use him with Norra Wexley and her special crit effect.

[X-Wings] are solid, and generally boring.  But they can turn into whatever you want.  Toryn + Flight Controllers and Yavaris and they become anti-squadron murderers.  Biggs, Jan, and Gallant Haven and they become the tankiest squadrons in the game.  Bomber Command Center and Norra and they stop sucking at anti-ship.  All Fighters Follow Me! and they can get a solid jump.