When we last left off, we were talking about the Rolling Dumpster Fire, a Garm based list that I created with Shmitty and brought to worlds because it somehow seemed to work.


But first, breakfast.  Did you know the 2019 World Champion had breakfast with us?  Spoiler:  It was not me.  Eat breakfast, folks! 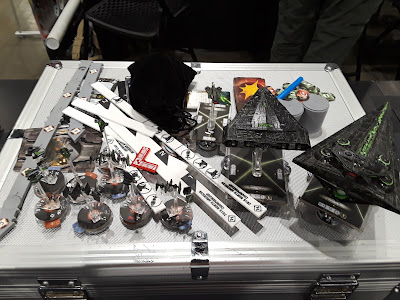 No photos taken of the game in progress.

I've played against a fellow that runs a tank 'dictor with squadrons, so I was feeling fairly confident I could drop it, and go for the table against a non-Brunson'd Quasar.  I hadn't counted on the maneuverability of adding Engine Techs to the Interdictor, combined with Thrawn Navigates, and Engineering every turn.

I had the Interdictor double arc'd, blocked, and dead to rights at the top of Turn 3 with 3 of my ships best arcs (Pelta / AFII, and the Salvation who hypered in to fork both it and the Quasar).  Instead it was able to engineer back quite a bit of damage between dial and token, run a I-II maneuver to just escape my block, and engine tech into just a side arc of my AFII, and an obstructed side arc of my Pelta.  While I did manage to finish off the Quasar, I was losing the squadron battle.  I wound up with my AF and Admonition limping away, while I traded Salvation for the Quasar.  While I kept the squadron battle close, it wasn't close enough, and wound up losing by 101.  Still, a 7-4 loss was enough to jump me up to 37th overall! 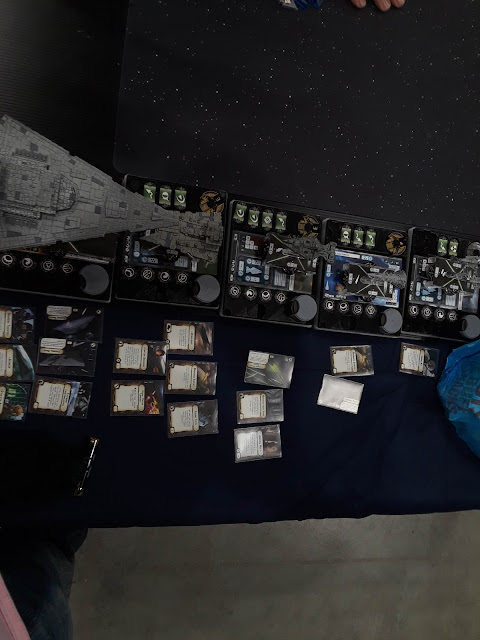 This one could have gone better.  I set up in my usual spot, figuring I'd smash from my right to left, which was in order - Arquitens / Raider / ISD / Demo.  Initially it went well, as Round 3 I took the Raider down to 1 hull, and was prepared to pop Motti to get the sympathy kill.  Unfortunately, I wasn't able to make that happen, leaving Motti alive with just a single hull after wiffing my squadron rolls.  This let the Raider live to the next round and do some key damage to the Assault Frigate before being erased.  Then the ISD and Demo showed up at the same time, and all my ships were destroyed one by one, with Demo doing some serious work in the rear of my line, and the ISD popping Admo and finishing off the Assault Frigate.

I had enough kills to get a 2-9 loss, at 259 MOV.  At this point I was well and truly out of the running, and my ride was impatient to hit the road to get home.  While I wanted one more game, I instead withdrew and headed for home.

My key points for the Garm list were to win big (or small is okay too) and lose small (if at all).  Results were mixed.  I was able to get solid wins when I won, but my loses were all over the place.  Bad matchups, specifically ones I didn't think were bad for me at first (Sloane Phantoms / Motti 5 ship) were devastating, but my limited losses and wins in other places were good enough to claw my way back to above par for the initial day.

Do I think this list is competitive?  Yes, very.  My Sloane loss would probably not have been as severe with a different approach.  The Motti loss hinged on a series of bad rolls (both me killing his Arq and Lando not helping Admo out at all).

Intensify Firepower continues to be a great card for finding a way to fit into lists, and Red Dice works wonders with it as part of a "thousand cuts" strategy.  Garm / Ahsoka are still the most effective way to enable this on the Rebel side.

Medium squadron ball in a squadron heavy environment is... well... a challenge.  It isn't quite the Scissors to the Squadron Heavy Paper, nor is it always a good solution against Squadronless.  When it worked though, it worked really, really well.

I think though, Garm is going to be retired for a bit.  I've been playing him more or less non-stop since the Ohio Regional, and this is going to be his last hurrah for awhile.  I've got some new or at least old ideas that I haven't fully fleshed out that I want to play around with, and I'm excited to see how Dic Double Moon Motti will play on the table more than just once. 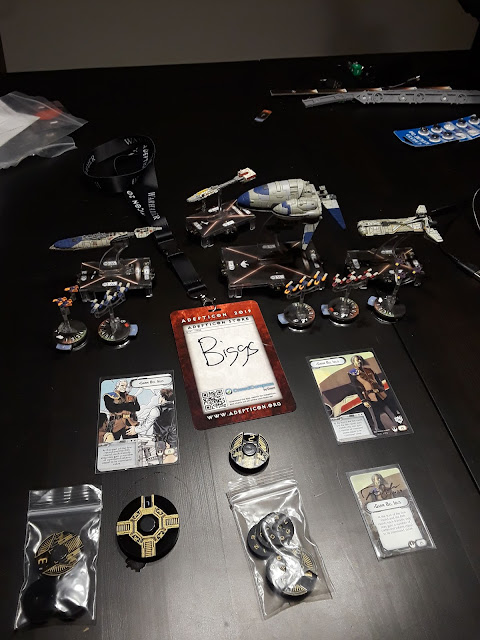