Time for us to take a look at the final color of dice in the Star Wars Armada dice pool.  That's right, we are on to what seems like everyone's favorite - Black dice. 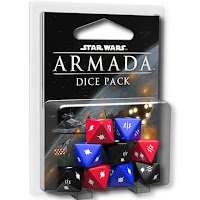 
Black dice are your best dice to roll if you want damage.  It has the same maximum damage potential as your red dice, the same hit percentage as the Blue dice, and better average damage than both.  It does have its flaws though.  First, the range for using black dice normally is the shortest - if you don't have a good way to close the gap, you can find yourself being shredded from a distance.  The second is that Black dice have no accuracy results, and thus no way to naturally prevent a brace or redirect from their high damage potential.

Black dice, for flavor, seem to represent ordinance, and ships with large black dice pools tend to have an Ordinance Upgrade.

When given the option to add a die of any color, with the exception of a Salvation (red), and anti-squadron (Red is the only option that gives you a shot at more than 1 damage) the best option for damage would be black dice.  Blue dice being useful when needing to either get a reroll through Leading Shots, or to fish for accuracy results.

Black Dice really like rerolls, much like Red Dice, but unlike Red Dice they aren't satisfied at a single hit.  For an anti-ship attack with a Black Dice, only the hit / critical result is "Better than Average" (2/8), meaning that if you have a reroll, you can afford, statistically, to fish for a critical result without a loss in average damage, which you really can't do with either Blue dice (6/8) or Red dice (5/8).  It is fitting then, that there is a Black Dice specific reroll in Ordinance Experts, and a Commander that is tailor made to boost black dice damage in Screed.

And that's pretty much all there is to say about black dice.  If you get into their range they hurt, but their range is also their biggest issue.
Incoming Transmission From: Biggs at 20:02
Email ThisBlogThis!Share to TwitterShare to FacebookShare to Pinterest
Labels: Armada, Dice, Strategy