The Art of Tanking - Lessons From An Old MMO Tank

Remember when talking about Repair Crews, I said that I wanted to talk about Tanking and Healing in a different article?  Well good news!  It is time for that article!

I needed a break from writing about upgrades anyways. 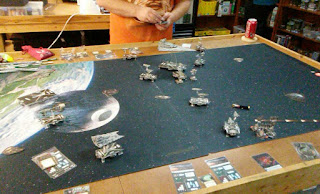 Back in the day, I ran an old Warcraft 10 Man Raiding Guild on the Sisters of Elune server.  This was during the good ol' days of Burning Crusade / Frozen Throne, and on an RP server, so... okay, not the best guild on the best server.  I'll give you that.  But the <Stoneshield Brewery, LLC> was born more to mess around than be serious.  Well, we did still try to be good at what we did, and that gave me as one of the Tanks, and later as one of the Healers, a chance to read articles on how to best tank and keep your tanks alive.

But I am getting ahead of myself.  First, I should talk about the terms "Tank" and "Healer":

The Tank is the guy you want taking all of the attacks.  In theory you have built up your tank to be able to survive those attacks while your opponents die.  How your tank survives those attacks will be the focus of this article.

The Healer is one way in which the Tank survives.  The Healer is able to provide enough recovery to the Tank to keep up with the attacks, or at least slow the damage until the enemies are dead.

For Tanks, these are our heavy hitters, the Whales everyone wants to bring down.  These are the ships that want to crash into the enemy formation and rip it apart.  And there are several ways (without healing) that they are attempting to stay alive.


Maximum Damage vs Total Health - For lack of a better way to describe this, Maximum Damage vs Hull is the ability of a ship to survive the most possibly damaging attack against it assuming it has full health.  Right now the gold standard is the triple tap from a Clonisher spec'd Gladiator.  So, 7 damage 3 times for 21 points total.  Right now, there is no ship that can survive that kind of damage naturally, but with some upgrades and defense tokens they can manage.

The big Defense Retrofit Upgrade that improves Total Health is Advanced Projectors, as it lets you use all of your shields before suffering hull damage - provided you can use the defense tokens.  At the moment there is no way to increase your maximum hull or shields besides Admiral Motti, who is an Imperial exclusive Commander.

Let's just look at the total health of the Large base ships.  Note that (total health) is measured from the best possible arc's shields + hull.

MC80 Liberty (13 total health) - only has one redirect token.  If used twice from the front arc, a Total Health of 17.


This is your ability to reduce the damage of the biggest attacks coming your way.  In Armada this is more or less exclusively Brace tokens, but there are a few other was to reduce the damage you take.  Bright Hope reduces incoming attack damage by 1.  Gallant Haven does the same for squadrons.

The king of mitigation is the brace token, so the best Defensive Retrofit Upgrade for this is the Electronic Countermeasure, which ensures that you have access to that brace for the biggest attack even if accuracy results are rolled.  In MMO terms, ECM+Brace is your "oh shit" button.  Also note that Intel Officer is the preferred counter to it from Clonisher or other big ships.

Looking at those same ships:

ISD (15 Health) - With Brace it can hold down 1 attack from 7 to 4 damage (and loses it to Intel Officer).  Total damage, 18.  Possibly survivable with the extra health from redirects (21 Health with redirects).

MC80 Home One (12 Health) - Brace again reduces the total damage to 18.  With redirects it is just barely survivable (20 Health).

MC80 Liberty (13 Health) - Intel Officer not usable.  Can bump all 3 attacks down to 4 (assuming no accuracies).  Total Damage of 12, which means it can survive without redirects (which can be Intel Officered - 15 Health)

As you can see, the ISD and Liberty both survive with roughly the same remaining health.  This is because both are better at different aspects of tanking - the ISD has better total health, while the Liberty has better mitigation.  It is the difference between the Meat Shield and the Plate Shield.

A defense token with a similar concept would be the Contain token, which makes hull damage less bad.


The third way to Tank was to just not take any damage at all.  This is Avoidance tanking.  You don't have to worry so much about a maximum hit, because you just aren't going to be hit by it.  In old MMO terms, this would be the Final Fantasy XI Ninja.  Low Health, low mitigation, but you shouldn't be able to even hit him if he kept his shadows up.

There are two defense tokens that exemplify this to varying degrees.  The Evade token lets you avoid one die at Long range, and reroll it instead at Medium range.  The Scatter token, on the other hand, lets you just cancel all die rolls against you.

Only one set of ships have the Scatter token (flotillas), but many have at least one Evade token.  This does, however, make Flotilla's surprisingly good at tanking in a limited sense.  Only the biggest ships don't have it as an option (and one Medium ship, the Assault Frigate Mk II does have one).

While no current Defensive Retrofit cards boost avoidance, there are quite a few cards that improve it.  Lando and Targeting Scrambler let you reroll your way out of hits, Montiferrat and Cracken let you fly as obstructed targets.  Mon Mothma improves the Evade tokens into short range.  Needa actually gives a ship an Evade token.  Medical Team lets you avoid specific critical effects.

Every ship has the ability to heal themselves to a certain extent.  2 Engineering points recovers a shield, and 3 points repairs 1 damage card from the hull.  A single point can improve your Health as well, by moving a shield from an unused arc to one where you would actually need it.  Currently, the best ship for this is the Interdictor, which can get 5 engineering points from a single Engineering command.  However, this is the least effective way of tanking, as you need to survive the attacks coming at you to heal yourself afterwords.

A lot of upgrades can help with this to a certain extent, as it is a core feature of the game (Engineering Command).  Anything that gives a token can give a self heal, so Veteran Captain, Raymus Antilles, Garm Bel Iblis, Tarkin, Comm Net, Tantive IV, Wulff and Aresko all count as potential self-heal upgrades.  Redundant Shields gives a free shield at the end of every turn for a Defensive Retrofit option.  For Support Teams, Engineering Team gives you an extra point towards repairs.  Finally, Redemption gives your entire team better self-heals.

Self healing (and healing in general) is more efficient on things with high mitigation or avoidance, as the damage that is healed is going to last longer than with a Meat Shield.  But the Meat Shields need the most healing traditionally to be effective.

The Interdictor certainly fills the role of Meat Shield well, having a lot of hull (11 total health - before Motti and Redirects) and repairing the damage done to it is important to keep it alive.  Another pair of ships that meet the Meat Shield archetype (to a slightly less extent) are the MC80 Home One and ISD.  The MC80 Liberty though, I think, gets the most out of its self heals.  It is a better mitigation ship (Plate Shield) than either the MC80 Home One or ISD, and properly repairing itself it can last a very long time.

This one is admittedly a little bit nebulous.  In order to be a dedicated healer, you need to be able to heal whoever needs it.  There isn't really a dedicated healer role in Armada, though a few upgrades can make ships capable of performing this.

Repair Crews let you fix hull damage only.  It is a flotilla only equip.  Not spectacular, as this is healing that can only be triggered once the enemy is already past your shields.  On the other hand, a 23 or 18 point ship is just the sort of thing that you'd want to be trailing behind you healing instead of doing damage.

The other upgrade is Projection Experts, and hasn't really caught on in the game as of yet.  It lets you move shields onto another ship - starting the healing early which is crucial for keeping a ship alive.  But what ship should have it equipped, and if they do, what should they be healing?  Only a few ships can even take a Support Team after all, and as we already discussed, Mitigation and Avoidance is more points efficient for healing than just a big pile of shield and hull.

We will find that out in the next article.  Until then, feel free to discuss how to better keep your ships alive for when you can't steer them out of the line of fire.
Incoming Transmission From: Biggs at 01:18
Email ThisBlogThis!Share to TwitterShare to FacebookShare to Pinterest
Labels: Armada, Strategy, Tactics, Tanking