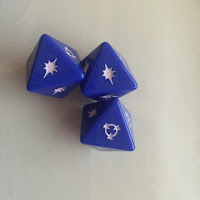 Last time we talked about Red Dice, the crazy, least standard, but long range dice.  This time we will be talking about the medium range, stable, Blue dice.


Blue dice are the most stable of the dice for anti-ship, and more or less the default standard for anti-squadron.  It roughly corresponds to the Ion Cannon upgrade slot, and in fact a lot of Ion Cannons grant a Blue specific Critical Effect.  Blue dice actually have the most upgrades that give you a color specific critical effect.

By stable I mean that every single result is something "good" - you are at least getting an accuracy even without damage.  You can even go a step further with Blue dice, and add SW-7 Ion Cannons to make even the accuracy result a damage against ships.  Of all the dice, this one needs rerolls the least (or with SW-7 not at all).  It also has the best odds of rolling an accuracy (25%) of any dice.  That makes this the go-to color to add if you need an accuracy for any reason, though Black will give you better damage if available.

What it lacks though is maximum damage.  There is no way to get better than a single point of damage on a Blue die.  A CR90-A (2 Reds and 1 Blue) has 5 points of damage possible from its front arc, a CR90-B has just 3, even though both have identical average damage (2.25).

Mostly every ship, and almost every squadron is based around Blue dice for anti-squadron shooting, and here the blue dice are less than ideal.  Black dice give better damage (0.75 average vs 0.50) and are still fairly common.  For ship AA though, Blue dice are better range.

Really, Blue dice are bland and uninspiring if you aren't looking at Blue Critical Effects.  Dodonna's Pride gives you the option, after your opponent has chosen his defense tokens, to forgo damage to just put a faceup damage card straight to the hull, and is unique in that it is the only non-weapon upgrade to feature a critical effect.

Likewise, Nym lets you chose and discard an opponent's defense token (after they spend their tokens on the attack, mind you).  This is tricky though if you don't have a way to reroll Nym, as he only has a 25% chance to roll a critical on any given attack.  Bomber Command Center or Toryn Farr are the only way to do this right now.


And that's it.  That's blues.  Not very flash, not very exciting.  The workhorse dice of Armada, and the most accurate of the bunch.
Incoming Transmission From: Biggs at 20:44
Email ThisBlogThis!Share to TwitterShare to FacebookShare to Pinterest
Labels: Armada, Dice, Strategy, Tactics