Let's keep the ranking going.  This time we are going to discuss the Empire and their Commanders. 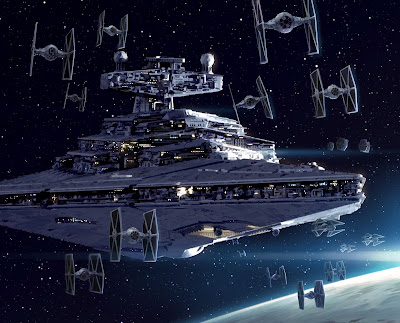 Again, a description of the tiers:


In Wave 1 or early Wave 2, Admiral Screed would have found himself front and center in this slot.  Now it lies empty.


Admiral Screed - Still a really solid choice for doing damage as a Commander.  He makes Black dice amazing, and makes Blue dice critical effect upgrades actually playable.  Would almost certainly find his way into most lists if it wasn't for...

Admiral Motti - The Imperial baseline commander.  Extra hull all around for everyone.  Makes ISDs scary.  Makes Raiders, Demolishers Gladiators and Gozantis annoying.  Simply put he goes into every list almost by default, and then the player decides if they want to give up the extra hull AND some points to grab someone else.


Admiral Ozzel - Can be very scary when paired with the right ships.  Ozzel allows a lot of re-positioning freedom that can catch your opponent off guard if they aren't considering it.  Also, his cheap cost means he could work with any list... though he really doesn't do anything for VSDs or Interdictors.  Legitimately concerns me when I see my opponent using him.


General Tagge - Might be better than Motti in certain situations for keeping your ships flying.  Namely, if you can use that brace and bring it back, you can save more than the 3 damage worth of hull Motti gives you.  Or double scatter with your flotillas and bring that back as well.  What keeps him out of the S tier is the timing of the tokens coming back, and the fact that accuracy based lists will eat him apart.  At least he is inexpensive, costing just 1 point more than Motti.


Darth Vader - Almost painfully costed at 36 points, Vader is an expensive way to reroll dice that comes with a built in negative of exhausting defense tokens.  That is not to say he is not good in the right list or the right hands, but he isn't great.  There are cheaper and more effective ways to reroll black dice, or dice in general across the Imperial fleet.


Grand Moff Tarkin - Falls into the "Clearly Outclassed" rather than "Doesn't do anything useful" here.  Tarkin is 38 points, which means you have to justify 14 points more the Motti baseline to bring his token slinging powers along.  Then you need a lot of ships to get the most of generating those tokens.  Then you need to be able to use the one type of token you can generate a turn with all those ships.  He could be good with the right build, but you really need to build around him in order to work.

Admiral Konstantine - A fleet with him practically builds itself.  It's going to be 2 Large or Medium ships at a minimum, and by the time you slot an Interdictor and an ISD into a list, there really isn't much room to play with.  The amount of kontrol he gives is impressive, but again, you want to spend points on control upgrades, and then you look up and you have 30 points left for squadrons.  I want to like him, but I have a very hard time building a list that uses him.


I'd almost guarantee that someone would put Grand Moff Tarkin down here, but I think he is actually a decent card that suffers from a huge point sink to bring him along.
Incoming Transmission From: Biggs at 15:00
Email ThisBlogThis!Share to TwitterShare to FacebookShare to Pinterest
Labels: Armada, Commanders, Imperials, List Building, Upgrade Rankings