Okay, this is going to be a little bit difficult, as we simply have to consider the ship itself that the upgrade is going onto.  Still, here we go - hopefully this is good for some discussion: 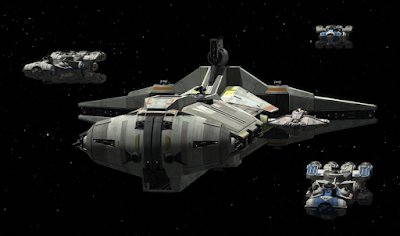 Once more, here are the tiers that I am working with:


Yavaris - This title is what makes Nebulon B's relevant, and there is no reason to take a Nebulon B escort if you don't take this title along with it.  Attacking twice with squadrons in a single turn is brutal.  It borders very, very close to broken.  For the rebels, this is the best title, hands down.


Jaina's Light - At two points, this is the closest thing to an Auto-Include you can get.  The only thing keeping this out of the Ω tier for me is that it just isn't as awesome on CR90B's as it is on CR90A's.  Still, if you have a CR90A, and you have 2 points to spare, it goes on the ship.

Admonition - In my opinion the better of the two titles for the MC30c.  Remove one dice for one of your 4 defensive tokens, at any range.  It's just good, and it keeps the MC30c flying far longer than it deserves to.  (Grumble, mumble, Q's freakin' Mothmonition, grumble.)

Bright Hope - 2 points to make your 18 point flotilla even more annoying to kill?  I have yet to lose a Bright Hope in any game that I have played, and I've only seen it destroyed once.  To be fair, in that scenario it parked in medium range of an ISDII's front arc.  Still, a quality title for a good ship.

Mon Karren - Turns your MC80 Liberty Class into a murder-beast.  By itself.  No need for other upgrades.  Other things just make it even better.  Makes it very hard to justify taking any other title when Mon Karren is still available.  Everything good about Heavy Turbolasers, but better.  Only reason it isn't Ω-Tier is because it doesn't actually stop the brace from being used.


Salvation - Takes a fairly meh ship in the Nebulon B Support Refit and turns it into a sniping monster.  You go from averaging 2.25 damage per shot, to having a real chance of doing 6 damage from the front arc at long range.  Good, solid upgrade.

Defiance - I really, really like this card, if only to punish any opponent that wants to go first player against me.  Adds some extra punch to a ship that really needs it, and works on any arc, so my plan to double arc with my MC80 is even better.  Almost put this in S-Tier.

Home One - Wave 3 & 4 ships really hate accuracy results when they are being shot at, and Home One is still one of the best ways to get those results without tying up precious Turbolaser or Weapons Team slots.  If you are running Ackbar, this is almost an auto-include.  If not running Ackbar... well, it's still decent.

Independence - All of the MC80 - Home One Class titles made the same tier?  There are other ways of tossing B-Wings into the fight, but the Independence title is still the most reliable way to get them up fast, and stacks with all the other tricks.


Paragon - Makes the AFII-A reasonable to use, and can even find a home on the AFII-B.  Makes me happy just thinking about using this on a ship that could take Gunnery Team, but now isn't because it wants to double arc ships like god intended.  The original reason why people were cautious around Advanced Gunnery.

Foresight - Admonition does it better, but nothing wrong with Foresight.  Better with Mothma for the evade boost, and simulates Advanced Projectors without having to spend the points or fill the defensive retrofit slot.  Still solid.


Dodonna's Pride - A bit pricey for a card that does 1 damage, even if that damage is a faceup card.  SW-7 Ion Cannons guarantee 3 from the front arc, and you don't even have to get lucky with a critical.  Niche uses, sure, if you want to put Leading Shots on the ship or just get lucky.

Gallant Haven - Once this was an S-Tier monster.  Now with Rhymer balls, fast moving B-Wing tricks, and better carriers than the venerable AFII-B, this has fallen by the wayside.  Could still use, but isn't quite at the top of the game anymore.

Quantum Storm - It's not horrible.  Extra movement is always nice, but you can't turn and re-position, you can't really ram much of anything.  It's not spectacular, like Bright Hope.

Endeavor - Mon Karren's misfit cousin.  Gives a defense token, but overshadowed by the glory that is Mon Karren.  Did I mention Mon Karren is a possible title for the same ship?


Tantive IV - A slightly better Comm Net, but on a more expensive ship that wants to do things other than feed tokens to someone else.  Pass.

Redemption - Extra engineering is good, but too bad it is on a ship that really wants to take either Yavaris or Salvation as a title.


Liberty - Pretend that the MC80 Liberty Class is a carrier with it's namesake title!  Better take a lot of other stuff too, since you need a reliable way to get squadron commands.  If you're doing that, then you probably want every single non-Turbolaser slot filled with squadron specific upgrades.  Serious talk, if you need fighter activations, take a transport or an AFII.  This would have been awesome if the ship was able to take an offensive retrofit, or just had a natural squadron value of something more than 2.  P.S.  Mon Karren, Mon Karren, Mon Karren, MON KARREN!
Incoming Transmission From: Biggs at 15:00
Email ThisBlogThis!Share to TwitterShare to FacebookShare to Pinterest
Labels: Armada, List Building, Rebels, Upgrade Rankings