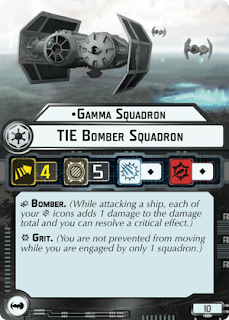 That's right, it's time for new TIE Bombers.  Two unique squadrons from the Corellian Conflict have been spoiled.

1 more point than the generic TIE Bomber, and you get Grit so that you can move away and make your bombing runs, even if you are engaged with a single squadron.  Not bad, since you are really the only Imperial with Grit.  Well, YV-666s have it, but...

Speaking of YV-666's, you know what you don't have that they and other TIE Bombers do?  No Heavy.  So you can use Gamma Squadron as 10 points of sacrificial lamb to pin something in place.  And at 10 points for 5 hull, it is actually the cheapest way to hold down an enemy bomber force.  Everything with a better hull / cost ratio has Heavy.  An interesting distinction for this TIE Bomber to have, and something you probably wouldn't notice the first time you look at the card. 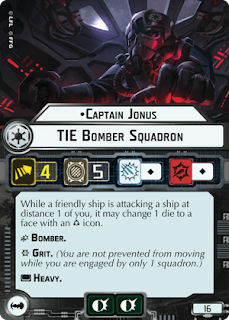 Exactly the same as a generic TIE Bomber, but with two additions.  Grit is almost superfluous, but lets you keep up with enemy ships that you are trying to stay near.  The special ability though, is spectacular.

"When a friendly ship is attacking a ship at distance 1 of you, it may change 1 die to a face with an Accuracy icon."

Let's look at that.  Have you ever wanted an accuracy with a Gladiator II?  Of course not, because you never ran one.  Well, now you can, and you'll always have that Red die as an accuracy if you need it without having to resort to Sensor Teams instead of Ordinance Experts.  Your ISD or VSD can now sport Quad Turbolaser Batteries and guarantee that Red accuracy.  Raiders can reliably pop Transports.

Plus you just have to be at distance 1.  Park directly in front of a slower ship and you're almost certain to hug the front of it when it moves.  If it is fast, Grit lets you get away and keep up with it, unless your opponent dedicates multiple squadrons to pin you down.

In spite of saying that it works well as part of a Rhymer ball, I don't think that is actually the case where he is part of the large cluster.  I think this squadron works better as a single squadron forcing your opponent to either split their squadrons to quickly finish him off, or deal with your ships being that much better at their job.

But really, I am really excited about him being a Gladiator II fix.  Did I mention you can use him to get an accuracy with a Gladiator II?  Because YOU CAN!