We have finally got more spoiled cards, so it is time to get back to my favorite part of the blog:  Commander's Guides!


It's time to talk about the X-Wings.  The namesake for the site URL, and by far the most famous starfighter in all of Star Wars.

In all respects, a normal X-Wing with 3 speed, 5 hull, 4 Blue Anti-squadron and a single Red anti-ship.  2 Brace tokens put him right in line with other Rebel heroes.  Bomber and Escort keywords are unsurprising.

But his special ability is something just spectacular.

You can already see places where his ability would be useful.  Pack him in with a YT-1300 team that is defending some B-Wings, and he can keep them up and countering longer.  Pair him with Wedge and Luke to bring the Three Amigos together again - it'll be hard to kill any one of them in less than 5 attacks.  Or pair him with generic X-Wings and Jan Ors to ensure a lot of places to pass damage around.

To say I am excited about him as a defensive X-Wing player is an understatement.  I really like the idea of him, Wedge, and Luke trailing along with a GR-75 w/ expanded hangers as a 3 man wrecking crew.  That is a really difficult 58 points to crack, even if you went whole hog anti-squadron.  I've liked someone else's idea of pairing him with Gallant Haven - do 2 damage to someone?  No, you did one damage to someone else.

More importantly, he can do something Jan Ors can't, and that is keep a 1 Hull squadron alive.  If the opponent just does one damage, he can pass that 1 damage to somewhere else.  No damage for your opponent, at least no damage on the thing they wanted to kill.  Not a bad deal for 6 points over the standard X-Wing. 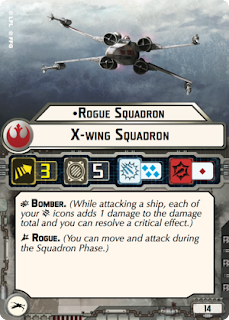 Just a single point more than a standard X-Wing, but in exchange for that 1 point you not only lose Escort (making it easier to keep this squadron alive (without Biggs shenanigans) but it adds Rogue.  So in a sense it would be better to compare this ship with the equally Rogue'd YT-2400, rather than an X-Wing.

Both have 4 Blue anti-squadron dice, but there the difference splits.  For 2 less points, Rogue Squadron has 1 less speed, 1 less hull, and trades its Black anti-ship for a Red.  But it also picks up the Bomber keyword.  So, the same anti-ship damage average as the YT-2400, but Bomber Command Center can let it reroll.  Plus a chance at a double damage roll.  So more point efficient for damage, if it can get into position to attack.  One other small bonus is that being unique, it does hang around for Rieekan fun.

I would say this is generally a good unique squadron, even if it isn't particularly flashy.  It's more point efficient than its competition, and can find a spot in just about any list.
Incoming Transmission From: Biggs at 23:07
Email ThisBlogThis!Share to TwitterShare to FacebookShare to Pinterest
Labels: Commander's Guide, Corellian Conflict, List Building, X-Wing