Two new TIE Interceptors that we can look at.  Let's see how they stack up: 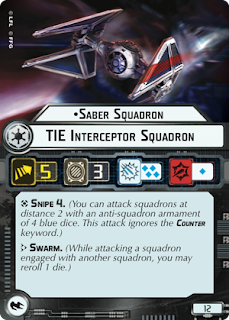 No Counter for this guy.  Instead of the standard TIE Interceptor that pops into the fight and counts on someone else getting shot because you're going to get shot back, Saber Squadron instead sits just outside of the engagement, and pukes out 4 dice at Distance 2.  Wait, correction, make that 5 dice thanks to Howlrunner.  Actually, make that 6 with Flight Controller.  With a reroll thanks to something TIEing up the bubble and Swarm (possibly Howlrunner).  That is probably enough to swat a generic Jumpmaster / HWK out of the sky, or put a lot of hurt onto a Soontir Fel.  Combine with IG-88 to make sure whatever you want to murder is very, very dead.

Not a bad trick for something just a single point more than a standard TIE Interceptor.  This is the only change for that point, though. 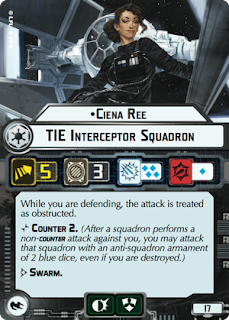 She's been spoiled for awhile now, but that doesn't mean she's not much anticipated.  Attacks against her are obstructed, which is a nice bonus for an Interceptor with Scatter and Brace.  This makes her more or less immune to anti-squadron fire from ships.  They can't even shoot her unless they have 2 dice, and if they do they can get scattered pretty easily.  This makes her a good option for anchoring some enemy bombers in place, or just generally getting out in front of your ships.

She can even make the excuse that she doesn't need an Escort to do what she does, like most TIE Interceptors do.  Soontir practically begs for them, and regular TIE Interceptors are just 3 hull, 11 point pinatas.  But Ciena has the survivability to do silly things, like lock down some Y-Wings that got left behind, or camp on top of a Rhymerball while your other squadrons deal with their anti-squadron escorts.  She's versatile.