Onward to the Empire and their most iconic starfighter, the TIE Fighter.  Corellian Conflict brings two new unique squadrons for us to look at: 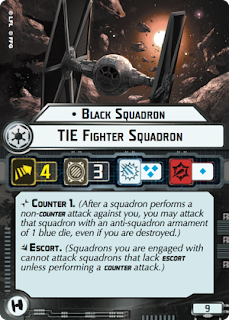 Your standard TIE Fighter, but it loses out on Swarm.  What it does pick up though is Escort and Counter 1.  And an extra point of cost to bring those two things.  This makes the squadron the cheapest Escort, and the first squadron for the Empire to naturally have Counter and Escort.

Unfortunately there is no good way to improve its survivability, and any 3 damage attack will be able to swat it out of the sky.  But you can make the most of its Counter attack by adding Dengar and Soontir Fel to the mix.  Howlrunner doesn't quite work due to lack of Swarm.

As an aside, the fact that it has 3 unbraceable Hull might make it actually absorb an attack or two before someone shoots at Darth Vader.

Overall, probably worth taking over a second TIE Advanced given the inexpensive cost and Counter, even if you are dropping a bit of hull. 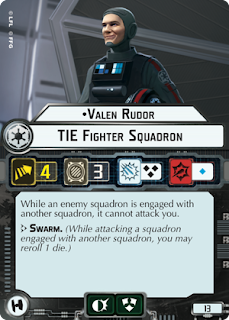 Good luck killing this guy.  If another squadron is engaged with your enemy squadrons, they can't attack you.  Not bad, especially with a scatter to take care of any anti-squadron ship shots.  He's almost guaranteed to be the last squadron flying in any engagement.  Some people have been calling him a "bully", and they're not wrong.

In addition to hiding behind your other squadrons, he brings 3 Black anti-squadron dice and Swarm to the party, giving him pretty close to 3 damage per attack and the ability to absolutely savage generic squadrons.  Adding Howlrunner gives him the all important Blue die to go after Scatter Aces.  Or if you use him just as the lynchpin of a YV-666 cluster, you don't even need Escort, and it's like they don't even have Heavy!

And for just 13 points, he's an absolute steal for how hard he is going to be to get off the board.
Incoming Transmission From: Biggs at 15:00
Email ThisBlogThis!Share to TwitterShare to FacebookShare to Pinterest
Labels: Armada, Commander's Guide, Corellian Conflict, List Building, TIE Fighter