Here's another ranking article, because filler is what makes the world go 'round! 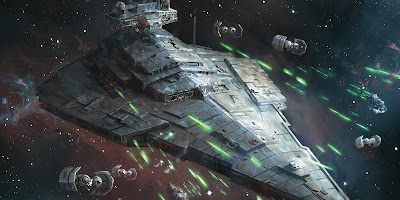 
Demolisher - Was there any doubt this title would end up here?  It has changed the way the game has been played since Wave 1, and even with Lando and Targeting Scrambler it looks to keep moving, shooting, shooting, and shooting for the waves to come.


Relentless - Making something as big as an ISD into an effective Command 2 is pretty amazing.  Combines very well with Skilled First Officer for a very responsive ship.


Interdictor - For being a namesake title, it certainly is a good one.  Being able to activate one of the nasty tricks the Interdictor has upon any ship activating is a very nice trick.


Instigator - Cheap for its price, and being able to hold a swarm of enemy fighters in place is all by itself a novel trick, especially when angry black dice are almost sure to follow the next turn.  Unfortunately, the FAQ that it doesn't work when all the nearby fighter cover is Heavy kind of knocked it from "excellent" to mearly "pretty good".

Impetuous - Another Raider title, and again a decent trick for the Raider to pull.  An extra attack against any squadron is very good for blowing up Intel ships or picking off the scatter of a particularly annoying elite.

Avenger - A quality upgrade for damage - basically can be taken instead of one of the more expensive turbolaser upgrades for better damage results, provided you can focus fire on an enemy and make them use their defense tokens.  A solid pick.

Vector - A cheap upgrade that speeds up all non-Heavy squadrons activated by your ship.  The big problem is that the squadrons you want to activate the most with this title (YV-666s) don't work because they are Heavy, or aren't as in need of activations (Aggressors, Firesprays) because they have Rogue.  Still, speed 5 TIE Fighters and TIE Advanced are nothing to sneer at.


Corruptor - A cheap investment if you are using a VSD as a carrier, particularly one with Admiral Chirneau, but only works with Bombers.  Speed 5 TIE Bombers were all the rage back in Wave 1, but with better carrier options, this upgrade has fallen by the wayside.

Insidious - A cheap title, but sadly it is not Demolisher.  I actually have a soft spot in my heart of the Insidious, used as a flanker or a Hyperspace Assault ship.  Sadly, it just isn't going to be seen in many lists.

Suppressor - Not a terrible upgrade by any stretch of the imagination, but it requires the enemy to not destroy the flotilla to get the most use out of it, since it activates after your opponent moves.


Warlord - An expensive investment for a title that does similar things to SW7 Ion Cannons / Turbolaser Reroute Circuit.  Requires investment in other cards (H9 Turoblasers) just to reliably do what you want with it.  Less than ideal for what it does and the cost associated with it.  You can do some gimmicks with it, and Agent Kallus, but again, that is a lot of points to be only effective against specific squadrons.

Dominator - Turn your VSD into a mini ISD at medium range at the cost of your health.  It is very expensive and comes with a strong drawback that you have to plan around to use it effectively.

Devastator - Again, a bit of an expensive buy in order to do extra damage.  Only works once per round, and requires that you have burnt through your defensive tokens somehow first.