Last night I had the opportunity to attend a book signing by Timothy Zahn for his new book Thrawn, about the titular Grand Admiral.

I have been a fan of both Zahn and Thrawn since Heir to the Empire was released in 1991, so attending was a no-brainer.  So, why am I posting about this on an Armada themed blog? 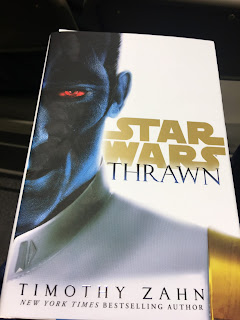 Cause Biggs said I could...

Also, Zahn gave some cool insights into the Thrawn character, how the Lucasfilm story group works, and the state of Star Wars in general that I think the readers here might care about.

The last time I had seen Zahn was right after the release of the book Scoundrels.  It was one of the last novels released before the Disney reset of the Star Wars canon.  He knew about the impending reset and said that he didn't hold any ill will about it having "appreciated the chance to play in George Lucas's sandbox".

He started this signing by telling how the new book came to be.  Once Disney took over he said that he had continued to communicate to Lucasfilm that he was still available to write Star Wars books.  He was met with "we will let you know".  Well, eventually he got an e-mail about going down to Lucasfilm and meeting with the story group, but they wouldn't say about what.  He assumed it might be a new book.  Eventually he found out Dave Filoni, the producer of Rebels, would be there.  He thought that was odd for a book pitch, but whatever.  Then he found out a film crew would be there.  He started to get nervous as he had no idea what this could be about.  When the meeting came Filoni told him that Thrawn would be the Rebels Season 3 villain and they wanted him to write a sort of prequel book to that...

Zahn's response "you're going to melt the internet"

Of course he agreed and had the chance to see some early footage and scripts.  They were far enough along in production at this point that he wasn't able to give them to much input, although they asked him several questions to ensure they were getting the character right.  At this point he had to sign multiple, strict NDAs before leaving Lucasfilm.  Immediately after that he left for Brazil on a book signing tour setup by his publisher.  He was gone for 3 weeks having to constantly answer the question "when will you write another Star Wars book?".  He doesn't want to lie and so he answered "I will write the first book they offer to me" or something to that effect.

He said it was brutal being so excited to return to Thrawn and not being able to share his excitement.  Later he related that while he doesn't get any royalties for the character, it was a nice ego boost to have him appear on screen.

Anyways, at that point he answered some questions from the crowd.  My 2 year old took this time to go get his picture with Boba Fett as a contingent of the 501st was there as well. 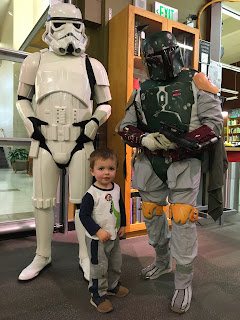 One of the first questions was about writing for Star Wars pre and post Disney.  Zahn was overall very positive about it.  He is generally a very pragmatic guy.  He said that the Star Wars Story Group (Pablo Hidalgo, Leland Chee, et al) are like having another set of editors.  But rather than criticizing his writing, they fact check everything and make sure he doesn't contradict other works.  Zahn felt that if anything it saved him a lot of work.  Before Disney he would have to do a lot of that research himself.  He shared two examples of the kinds of changes that they make:  First, he shared an instance of them asking him to change the name of a minor character as it was very similar to a character from another upcoming work.  Zahn said that was a simple find and replace to fix, no big deal.  Second was an instance early on in the book where Zahn had some TIE Fighters showing up.  Apparently, according to the timeline TIEs didn't exist yet.  So the story group suggested an alternate he could use.  Which gave us V-Wings in the book.  Zahn was very positive about working with Lucas and said they are all huge Star Wars fans and want to get things right.  If Disney had changed anything, it would seem to be the levels of secrecy about upcoming releases.  He stated over and over that he knows nothing himself.

I asked what he thought of Thrawn's portrayal on Rebels and what it was like to have the character on screen.  He loved everything about it.  He felt they absolutely got the character right and I could tell he was coming from a genuine place.  Zahn said working with Thrawn again was like meeting up with an old friend for dinner.  He really cares about the character and said he was so happy with how Rebels treated Thrawn that he was hoping to buy the writer that had written the Thrawn episodes dinner.

He especially liked how Thrawn played the long game in Rebels and was always looking towards his end goal.  Sure, the Rebels might escape with some old Y-Wings, but he learned their tactics, etc.  He especially liked the battle in the finale and said that Thrawn got a pretty crushing victory with only the heroes and a handful of small ships escaping.  He felt Thrawn was only denied a total victory by 3 things out of his control:
Zahn felt that if any one of those 3 things doesn't happen and Thrawn has a total victory.  He said that was consistent with how he had written the character in his novels, with Thrawn only having setbacks when he had incomplete information or the like.

So, the Rebels version of Thrawn got a solid thumbs up from probably the most authoritative source on the character.

Zahn answered lots of questions and the main thing that I got from them is that he is just a big fan of the Star Wars universe.  I think that comes through in his writing.  He has ideas for more books and is just waiting for the call from Lucasfilm.  One would assume that if Thrawn sells well Zahn will be writing more Star Wars books in the future.

Oh yeah, Zahn was also pretty geeked that Thrawn had recently been made into a Lego.

After that is was time to get books signed.  I waited in line with the rest and when it was my turn I asked if he had watched Rebels before Thrawn was added.  He said that he hadn't as early clips made it seem a little too kid focused, but once he learned Thrawn would be there he and his wife went out and bought the first 2 seasons.  He said that he grew to really like the show and the way that they are developing the characters.  It is fun, feels like Star Wars, and the characters have some strong arcs.  I'd already had the chance to have Zahn sign most of my collection, so to my new copy of Thrawn I added these: 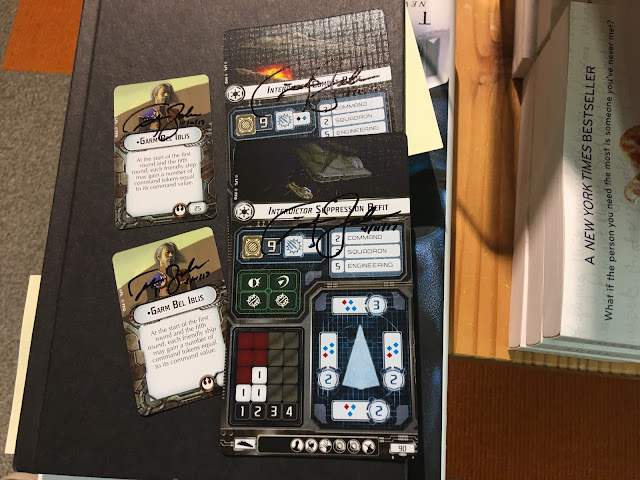 Cause I figured that having Zahn sign my copies of Garm bel Iblis and the Interdictor is how I can finally make this blog post related to Armada.

Incoming Transmission From: shmitty at 14:02
Email ThisBlogThis!Share to TwitterShare to FacebookShare to Pinterest
Labels: Thrawn, Zahn