Thanks to all of you readers for giving me, Shmitty and Truthiness your attention, as Truthiness comes up with great list ideas, Shmitty crunches numbers and uses logic to prove things others can only guess at, and I... write the other articles. 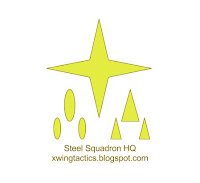 
Armada started out quite slowly, with only the starter set being available initially for purchase.  That didn't stop certain players from buying up 3 or more starters so that they could get to play 300 points, but the majority of us were content to test out the 180 point game and anxiously awaited Wave 1.

Wave 1 opened the game up in mid 2015.  The increase to 300 points, and great increase in ship and squadron choices, gave players the chance to see what the game would be like going forward.  Suddenly, the player base had two thirds more points to spend, two thirds more ships to choose from, three times as many commanders, and over 4 times as many individual squadrons.

And while this did finally give those of us that would continue with the game the game more to play with, it also served to show others that it was not the game for them.  The first US Nationals was the culmination of this.  Armada sold out almost instantly when tickets went up for sale, but a significant number of players wound up dropping after the first or second round, many never going on to play Armada again.  This also gave us the first well known fleet list of Armada; the GenCon Special, created by the winner of US Nationals, Q.  With 3 Gladiators, a Victory I-Class Star Destroyer, and no fighter cover, the GenCon Special quickly emerged as the most dangerous list in the game, spawning worry that squadrons were worthless and that the game would be about just ship battles with no place for carriers except as point pinatas.

The end of 2015 however gave hope to the squadron-centric list, as Jonathan Reining showed up to Worlds with 3 Assault Frigates and 8 A-Wings, eventually winning the last major 300 point tournament.  This also marked the last Nationals or higher tournament without cut to the top players out of the swiss rounds.  Unfortunately for the A-Wings and Assault Frigates, their time in the sun would quickly end as Wave 2 was just around the corner, and Massing At Sullust would quickly give way to the 2016 World Cup.


The 2016 World Cup was the first online tournament that would use Wave 2 ships and squadrons, and what a change that brought to the game!  Intel was probably the biggest change, but Rogue fighters were also a major concern going forward.  The ISD and MC80 gave giant capital ships to the game.  Ackbar gave the Rebels some serious guns, while Vader brought rerolls to everything.  But in the end it was Clontroper5 and his Clonisher list that wound up taking first place, and began the long concern over activation advantage and high bids for first player.

The Clonisher was notable for bringing Armada back to what made the GenCon special good, but spread the offensive power out through even more ships, relying on delayed activations, strong flak, and a light fighter screen to survive against its opponents.  Especially on fighter heavy lists (which many players were trying out thanks to the new wave of fighters) the goal was just to run down the enemy carriers, knock them out, and win by the enemy having nothing left on the board.  And win it did, dominating the Pod rounds, and then dominating its way through the elimination.  While Clontroper5 himself would have to leave the game soon after for missionary work overseas, his list and the Clonisher build of Demolisher (98 points - Intel Officer, Ordnance Expert, Engine Techs, Expanded Launchers) would live on to scare players for waves to come.

During this time, Rebels were searching for their own answers to the Demolisher question.  Regionals saw Ackbar develop a long range game for the Rebels, and Rieekan create Second Player lists that could still hit after a Demolisher attack.  US Nationals had Q repeat his success from 2015 with a Mon Mothma / Lando / Admonition MC30c Torpedo, and 3 CR90A's with Turbolaser Reroute Circuit, as well as 8 YT-2400s, making good use of the Rogue keyword.

Also during this time, GenCon became the North American Continental Championship, and was won by a player named Norm Weir with just 2 ships, an ISD and Demolisher, and a large Bomber cloud (with Rhymer).

Then, Wave 3 hit.  And Wave 4.  They both hit together.  At the same time.  Shut up, don't ask questions why they aren't the same wave.


At some point during FFG's development of Wave 3, it looked as though the larger of the two ships in each faction for the wave - the Interdictor and the MC80 Liberty - would be delayed for longer than it would take to produce the smaller flotillas.  So the decision was made to split the release into two different waves:  Wave 3 containing just the flotillas, and Wave 4 contained the combat ships.

Then the flotillas either took longer to produce, or the larger ships wound up being finished ahead of schedule.  Or both.  Either way, the now titled Wave 3 and Wave 4 were released at the same time, mid-way through Nationals season.

While the Interdictor and two Imperial commanders - Konstantine and Tagge - struggled to find a home in the new meta, the Flotillas were a huge and immediate hit.  No where was this more apparent than the German National, where "Tokra" won with 8 Gozantis and a large TIE Bomber wing.  GR-75s and Gozantis both allowed for padding of activations, putting Large base ships on fairly even footing with small ship, multi-activation lists.

However, the first major test of Wave 3/4 would be the 2016 World Championship.  Ultimately it would be Josiah "JJs Juggernaut" Burkhardsmeier that would be the eventual champion, and create the archetype list that would later be known as the 2+3 - 2 combat ships and 3 flotillas with a heavy squadron screen.  JJ's list was an Assault Frigate, Admonition, and 3 flotillas with Bomber Command Centers (for lots of Y-Wing Bomber rerolls) and Toryn Farr (For Blue Dice anti-squadron rerolls).  For his squadrons, he took 2 YT-1300s, 2 HWK-290s, and 8 Y-Wings.  While the 2+3 would later be better known as a list with Rieekan at the helm, JJ's World Champion list took Dodonna instead, putting him on the Assault Frigate, rather than a GR-75.

2017 opened with Wave 5's debut, right around Christmas!  The squadron game had never been so open, with 32 new squadron choices between Corellian Conflict and Wave 5's two squadron packs.  While the Cloak keyword really never took off, and Snipe found some limited success, the new Wave 2 fighter Aces quickly found a home, as did some of the less specialized fighters from the Wave 5 packs.  Relay and Strategic in particular began to show up more and more, with Flotillas being able to push ships from a distance.

Wave 5 also opened up the 2017 World Cup, a chance for players to test out the wave.  Again, it was Josiah taking the lead, with Clontroper5 firmly out of contact, and winning the Cup.  His list was odd, but synergistic, and bought Moff Jerjerrod the nickname "JJ".

With the change by FFG moving Armada and the rest of the Star Wars games onto the May track, Regionals began to report the same commander again and again towards the top.  Rieekan was quickly gaining steam, with more Aces to synergize with, and the 2+3 archetype responding well to fleet building for maximum squadrons.  Particularly Yavaris, the old Wave 1 Nebulon B, was easy to plug in with a pair of Relay 1 VCX's to be able to "double tap" at long range.

Rumblings of this combination were common, but easily dismissed, until 2017 Worlds in May, when Norm Weir beat out the rest of the competition with a 2+3 list, with Rieekan, Yavaris and Gallant Haven.  More telling, his opponent for the championship was also a 2+3 list.  So was another player in the top 4 cut.  So were 2 more players in the top 8.

This in turn seemed to lead to the first balance change via FAQ/Errata in Armada's history, with not only Rieekan, but the ships and squadrons Rieekan was created to balance against (Demolisher / Rhymer) having their powers significantly reduced.  Also eliminated were Bomber Command Center's ability to stack, Turbolaser Reroute Circuit's ability to fire twice in a single turn with a double-arc shot, and perhaps most significantly the ability to make a Flotilla the flagship.

This brings us to Wave 6, where we are today.  Hammerheads and Quasar Fires are out, Leia and Sloane are the new commanders, and there are a ton of upgrades that seem to have reinvigorated Victory Class Star Destroyers, Avenger ISDs, and maybe more!  Only time, and GenCon will show what will be the dominant new meta, but Steel Squadron will be here to give advice and tell you about it!