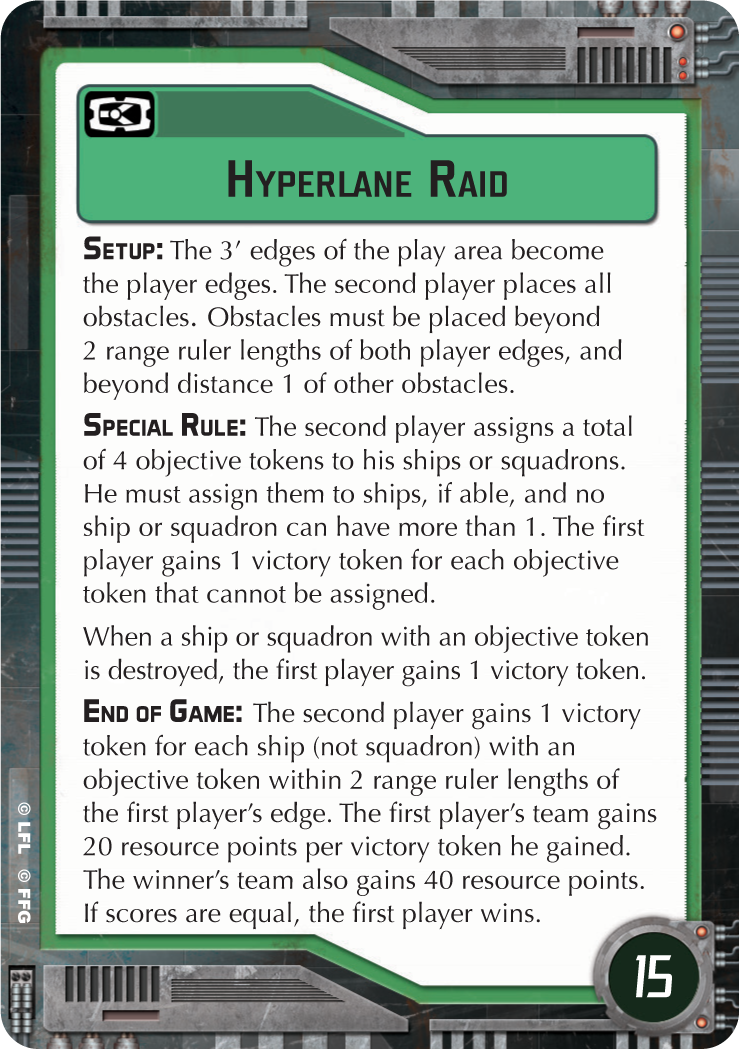 As promised, my Corellian Conflict focus for July continues with the Rebel Special Assault: Hyperlane Raid.


A lot of Rebel players are pretty aggrieved that this is their resource collection scenario. There are some good reasons for that too. Since Show of Force plays to Imperial strengths by focusing fighting around a central area, you'd expect Hyperlane Raid to be the same for Rebels. Not so. Instead Hyperlane Raid also plays a bit to Imperial strengths. For one, the narrowed board seriously hampers lateral movement, which is often critical to Rebel play. Those big powerful Imperial front arcs have a much smaller area to cover. The scenario also doesn't force any kind of urgency on the Imperials. 20 Victory Points per ship isn't really enough to convince me to lug it across the board as fast as I can. The incentive is to keep my ships alive. That both deprives the Rebels of resources and also saves me from spending resources to fix my ships.

That's why the Imperial strategy for this scenario is ridiculously straight forward: sit back and force the Rebels to come to you. If you park in the back of the deployment zone at low speed, which there is little reason to avoid, the Rebels have to spend a good chunk of the game just getting to you. When they do, you'll have a stack of tokens and giant guns ready for them. You should absolutely fight to win. After all, you can flip 40 resource points out of the scenario. Ship survival, however, is the most important thing. Like with Show of Force, it's all about the math. A lost ship gives the Rebels 20 resources and costs you a chunk in refit costs. Make sure you have nav commands and tokens prepped, because you should be ready and willing to fun it out of the combat zone the second things go south on you. My philosophy for the Rebel approach to this scenario is a little more involved than just the tactics during the battle, but I'll get to that next week. It boils down to this, though: embrace your inner Ricky Bobby. YOU WANNA GO FAST. You've got to close the gap as fast as physically possible. The more turns you are in range to do damage, the better this scenario will go. That is going to be entirely predicated on how quickly you can close the gap. So wrestle a cougar. Get your Tokyo Drift on. Paint your ships red (cuz da red wunz go fasta!). Get struck by lightning from a particle accelerator. Do whatever you have to do to make it happen, just GO FAST.

Of course I'm always looking to maximize resources in these special assaults. Biggs was nice enough to point out an alternative approach. The objective has been errata'd to read - unlike literally every other objective in the game - that First Player wins in the event of a tie. Maybe your fleet isn't that fast, and someone has to collect some resources. 40 resources are better than nothing, so if the Empire just wants to sit in the corner, just run a blockade to make them come into your guns. Ackbar especially loves this approach. No need to get greedy.  Your team sent you to collect some resources and not let the Empire run away with any.  You accomplish both those goals by setting up your blockade and daring the Empire to come to you.  Again, if they don't want to play, if they don't want to try to get those resources represented by objective tokens to the front line, you've already won.
Incoming Transmission From: Truthiness at 15:06
Email ThisBlogThis!Share to TwitterShare to FacebookShare to Pinterest
Labels: Corellian Conflict