Only one offensive upgrade this expansion that isn't also a Boarding Team. 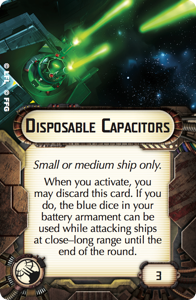 But wow if it isn't a doozy.


Small or Medium ship only.

When you activate, you may discard this card.  If you do, the blue dice in your battery armament can be used while attacking ships at close-long range until the end of the round.

The biggest note you should take away is that you cannot use this on Large base ships.  So no, you can't open up with an ISD or MC80 on something with this upgrade.  But there are a lot of ships that can use this upgrade, and turns them into a fairly scary threat at long range.

Victory II-Class Star Destroyers, for example, love being able to toss 6 dice at long range with no other upgrades involved.  With a total cost of just 88 points for the ship and upgrade, and assuming you have a front arc shot, there is nothing else that can get 6 long range dice for the same price.  A close second would be either of the Interdictors, who with a double arc on a ship at long range can put 8 dice in two attacks for 93 and 96 points respectively.

Imperials actually have a lot of options with this card besides the two most obvious.  The Quasar I-Class can put 3 from it's nearly 180 degree front arc and 2 from the sides with this upgrade, and has enough slots to take this upgrade and something else to help your squadrons.  The Raider II-Class, normally ignored in favor of the Raider I, now puts out a very respectable 3 dice at long range on it's approach, and with some kind of dice manipulation help can push Ion Cannon criticals onto the enemy.

For the Rebels, the best platform might oddly enough be the Modified Pelta-Class Command Ship, who gets 4 dice at long range for 63 points.  An alternative thought would be using this with a Hammerhead Torpedo and Commander Sato to dump 2 (3 with Concentrate Fire) Black Dice at long range, and try to push a long range critical onto an enemy with no evades.

I'm sure someone has thought of using it with flotillas of some sort.  After some play testing, I can safely say "Don't."  It's not going to make a significant enough contribution to bother with the points.
Incoming Transmission From: Biggs at 14:08
Email ThisBlogThis!Share to TwitterShare to FacebookShare to Pinterest
Labels: Interdictor Suppression, List Building, Offensive Retrofit Upgrades, Pelta-Class, Star Wars Armada, Victory II-Class, Wave 6