These are the first two slot upgrade for Armada, and because of what every upgrade that has these two slots have been so far, we're going to call them Boarding Teams. 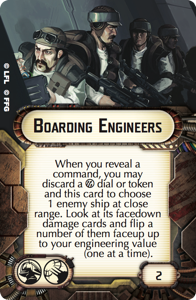 First, let's look at the ships that can use these upgrades.  For Rebels you have the following:

For Imperials you have these ships:

When you reveal a command, you may discard a Squadron dial or token and this card to choose 1 enemy ship at close range.  Look at its facedown damage cards and flip a number of them faceup to your engineering value (one at a time).

As others have mentioned, this is a "Win More" card rather than a good card to put damage on a target.  Between the timing of the card (flipping when you reveal a dial, and thus before you have attacked this turn) and the very random nature of not knowing what damage cards are even dealt to the opponent, this is hard card to utilize.  While a ship with a high engineering value could flip more cards, chances are the cards you would even want to flip would be two or less, so even a ship with 2 Engineering Value would probably get a decent use out of the card.

For the Rebels, the Hammerhead is probably the best home for this card.  You want to crash into the enemy anyway, and a delayed Hammerhead swinging up to an ISD after 5 or 6 cards have already been dealt to it can maximize the impact of the card.  A Command Value of 1 means that you're likely to have the appropriate command ready to go, without having to bank it on a previous turn, or waste an officer slot or a Comms Net activation to have a token available.

Likewise, for Imperials, the Raider I-Class is the best use for this upgrade.  Another ship that is fast, low command, and shoots best when in close range.  And again, you probably only need 2 Engineering to find the best damage cards to flip. 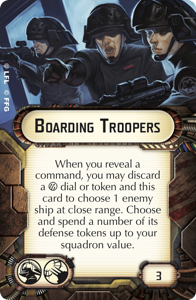 When you reveal a command, you may discard a Squadron dial or token and this card to choose 1 enemy ship at close range.  Choose and spend a number of its defense tokens up to your squadron value.

If the last card was "win bigger" this one is "start winning".  Just about everyone and their kid brother looked at this card and said "if I run it on Avenger, I can shut down all their defense tokens!"  And they did, and it worked pretty well.

Everything on this card works pretty well.  Its timing is excellent, as you shut down the enemy's defense tokens when you are already in close range, ready to shoot.  Using it with a high squadron value ship lets you utterly open up on something, and depending on what it is (Medium base ships in particular) it might very well not be there when the shooting is done.

Particularly, it works with Avenger (or any ISD) because they have everything you want to make this good.  High speed (to close into Close range), 4 squadron value (spend every token), an excellent follow up shot, and enough hull to survive being at close range.  Other ships tend to lack one or more of these things.  The Hammerhead doesn't really have the shot (unless you buff it properly), the squadron value, or the hull.  The Assault Frigate really lacks the follow up shot unless you're hitting with Ackbar.  Victories have a hard time getting into range.  Raiders don't have the hull or squadron value.  The Quasar really lacks the follow up shot, and close range is not where it wants to be.

There is a opportunity cost though.  While most ISD's won't lament the loss of an offensive retrofit, losing the Weapons Team to this upgrade is rough.  Gunnery Teams being the biggest thing you don't want to see go.  Another caution is that it only fires once, and that can be a huge problem if the enemy is capable of surviving the shot.  This makes it situational - you want to use it on something not only big enough to be a prize, but also weak enough that it won't be able to eat the hit and bounce back the next turn.  Lando, Targeting Scramblers, and other non-defense token upgrades are your worst enemy if you're planning on using this card.  Having multiple followup attacks on the target, especially if it is something robust like another ISD or a Targeting Scrambler Interdictor is crucial to making the most of it. 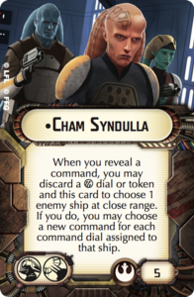 When you reveal a command, you may discard a Squadron dial or token and this card to choose 1 enemy ship at close range.  If you do, you may choose a new command for each command dial assigned to that ship.

Cham is currently the best "electronic warfare" card in the game.  However, he has two problems.  He's limited to Rebel ships, and there are several upgrades that just make his ability pointless.  If you've ever been the victim of the Slicer Tools upgraded flotilla, then you know how unfortunate getting your command token spun can be.  Squadron commands turned into pointless Repairs.  Navigation commands spun to Squadron commands with no fighters in range.  Cham lets you use your own nasty idea of "what would be the worst thing" and give it to one opposing ship, for up to 3 turns!  (or 4 if you're flying a Corellian Conflict in a Nebula)

But there are a lot of officers that laugh at Cham.  Support Officer limits the damage to a single turn, while you reset your dial.  The Wing Commander like officers let you run a specific command without interference.  Liaisons let you feed tokens to fix Cham's chaos.  Even a Skilled First Officer can make Cham's destruction last just a little less long.

Besides this, there's only two rebel ships he can go on, the Assault Frigate and the Hammerhead.  Neither one is a particularly spectacular ship for messing with things besides the dial scramble, and he's a one shot and done trick.  Probably the best spot for him is onboard an Assault Frigate Mk IIA, the variant with more of a punch in the front.  Not reliant on squadron commands or Gunnery Team shots means that the A variant can deliver Cham where he is most needed, and maybe even live to tell the tale after trading some shots.  Maybe stick a Veteran Captain onboard to have the squadron token ready the turn you need it, and Paragon to make the most of your double arc shots.
Incoming Transmission From: Biggs at 09:00
Email ThisBlogThis!Share to TwitterShare to FacebookShare to Pinterest
Labels: Boarding Teams, List Building, Star Wars Armada, Strategy, Wave 6