With no news for Armada in some time, there isn't a whole lot to talk about. I could do some battle reports on my continuing adventures with Raddus (which I may still do), but otherwise I haven't had anything particularly good to talk about. Meanwhile, our friends over in the X-Wing community are being treated to a brand new edition of their game come this fall. That has invariably led to speculation in the Armada community centered around one question: what would an Armada 2.0 look like?

I'll start by saying I'm reluctant to see big changes to Armada. Despite some slight tweaks here and there, we have a remarkably well balanced game even seven waves in. Those tweaks would become even easier with an X-Wing style app that can adjust upgrades and points on the fly. Added point granularity would also be an obvious improvement. X-Wing doubled their points to 200. An 800 point Armada would have similar room for points flexibility.

Those are easy and simple changes, though. I'm here to talk about systemic changes. And there's been one complaint that has reached my ears more than anything: squadron play. Namely, squadron play has become increasingly tedious and complex, resulting in some very slow games. From what I've seen, it's typically the biggest complaint of those that no longer play the game, or have taken a step back. The Finals match this year is emblematic of those complaints. The finalists only managed five turns in over three hours of play, largely because of the slow squadron play. So how could an Armada 2.0 fix this?

The biggest slow down in squad play right now is checking all the various interactions. Am I at distance one of Howl and Dengar while engaging only this one target so I can bypass escort? Am I in range of Jan and Toryn and have escort cover? What's the perfect place for Mauler's splash? Then you add in considerations like Intel, Grit, Swarm, Snipe, Relay and so on. It's gotten to be a bit too much in my opinion. What if all (or most) squad interactions were reduced to base to base contact? Credit goes to Party Potato for sticking the idea in my head and giving me the inspiration to deep dive into the topic.

The idea is simple, but the ramifications are considerable. The goal is to make all the range checking go away and speed up gameplay. Want to be engaged? Move into base to base. Want to shoot a ship? Move into base to base. No need to check the distance on your theoretical final position. If the end of the range ruler touches whatever you're going for, boom you've got it. That in and of itself makes things easy and fast. The question then becomes about all the various interactions.

First of all, there would have to be some refinement to squadron speed. Since squadrons are currently based around their speed plus distance one for their attack radius, it makes sense to increase most speeds by one. The current speed three would become more or less become the slowest feasible speed. Imagine trying to get speed two B-Wings into base to base contact with...anything. Not really going to happen. This makes for an easy adjustment, though. All existing squadrons up their current speed by one. B-Wings become speed three. Y-Wings and X-Wings become speed four. TIE Fighters become speed five. The only question would be what to do with current speed five squadrons, but I honestly think they'd be just fine as is. Does it really hurt A-Wings and Interceptors if TIE Fighters amd TIE Bombers are now the same speed? Not really.

Now for the really fun part. It's time to cut some keywords. I think Intel and Grit can just go away. There would no longer be the threat of a Scatter squadron shutting down a giant glob of bombers or blocking two sides of a ship. A well spread out bomber force would be hard to entirely tie down without a significant investment. Engaging even two squadrons at once would be hard. Three would be near impossible unless the other player piles in. You would have to line up multiple squadrons along the side of a ship. By the same notion, however, a medium squadron wing could actually do something. You can find those one or two squadrons you absolutely need to lock down and force them to fight you. 64 points of TIE Fighters could individually engage every squadron in a typical 8-count Rebel ball and force them to fight their way out for at least a turn, likely two.

The question, then, becomes what to do with Jumpmasters and HWKs. I don't want to add any more keywords, so perhaps the answer is in other key words. Strategic is the main attribute I think would be most appropriate. In doing so, I would recommend just removing it from VCXs and Lambdas, thereby decoupling the currently interlocked abilities of Strategic and Relay (both of which work fine as is without an undue amount complication for the squad game). It also has the added benefit of making squadron heavy fleets choose one of those two benefits they want for the points. Do you want to be objective oriented, or do you want to extend your command range? You only get one per squad. That might mean you need to increase the Relay values to make them worthwhile (or maybe just take away numbers entirely with the Relay nerf?), or they might never see play. 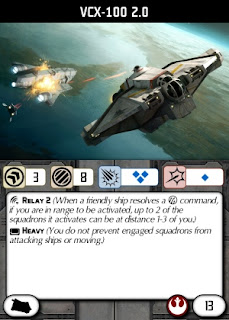 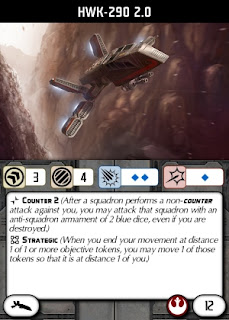 Would you use these?

Escort and Swarm would possibly need to be reworked, but I can see it working fine as is. They'd be slightly less valuable, but that just means you can adjust the points of those squadrons to reflect that reduced value. For escort, you could effectively create a wall preventing an opponent from getting into base to base contact with your bombers. Even if they do jump your bombers, you can jump in and force those squadrons to swap over to you for future attacks. While we're on the topic of Escort, Biggs would need a new ability. How about a super escort? For example: if a friendly squadron in base to base contact is attacked, you may resolve the damage as if you were the target of the attack.

With the devalument of Escort and the elimination of Intel decreasing the need to target specific squadrons, I think Snipe could also just go away altogether. E-Wings could morph into something else altogether. Their extra speed is already a good distinguisher from the X-Wing, as is their lack of escort. They could morph into something akin to a Rebel TIE Defender: a premium all-arounder that mauls the hell out of other squadrons. Saber Squadron would need something else, but I don't know enough about the story behind the squadron to really offer a solution.

Then there's a whole bunch that were never that complicated and work just fine with base to base. Bomber? Yup, that's good. Heavy? Check. Counter? Yup. Rogue? Uh huh. Relay and Strategic add an interesting aspect to the game that I'm not keen to change. And there's loads more one offs that would need to addressed. How do Mauler and Ten Numb shake out? What about Norra? Jendon? Ketsu? All of their abilities could be tweaked or reworked to be impactful. The main thrust here is to simplify things. I'll do some test games to see how it works and report back. If any of our readers out there have stopped playing Armada (such as our flood of recent Legion arrivals), I'd like to hear why. Was the complexity and/or the perceived slowness of squad play part of your reason for stopping? Do any of these changes sound like they'd bring you back? Give us your take in the comments below.
Incoming Transmission From: Truthiness at 11:00
Email ThisBlogThis!Share to TwitterShare to FacebookShare to Pinterest