Time to get caught up to Wave 4, which we should see next week(?).  Unless you are at GenCon, in which case you already have it in your hands.  Or you are Alexandra or Craig.

I am going to stop being jealous now and start talking about the ship. 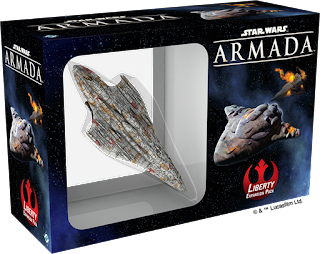 
The new MC80 Liberty-Class is a front arc beast in a way that Imperial ships wish they could match.  Actually, both ships from Wave 4 really give off the feel that they are from the opposite side, with the Interdictor being a double-arc ship with no Gunnery Team and the MC80 Liberty being a front-arc ship with no Defensive Retrofit.

The Liberty chimes in as a typical "Big" ship, with Command Values of 3, and an Engineering Value of 4.  It has a slightly reduced Squadron Value at 2 compared to other large ships - while it can activate squadrons, that is not where its talents lay.

For defense, the ship has the same MC80 hull of 8, and a very "Nebulon B" defense token compliment of 2 Brace / 1 Redirect.  The large front hull has the highest shields yet for a single ship, boasting 5 shields, with 2 on each of the sides and rear.

The ship is also fast, if not particularly maneuverable, with 1 yaw at the first and third clicks only at all speeds.  It does have the ability to take Engine Techs or Nav Team to give it better maneuverability.

For upgrades, besides the Commander and Titles, the ship can take an Officer, Fire Team, Support Team, Ion Cannon, and TWO Turbolasers. 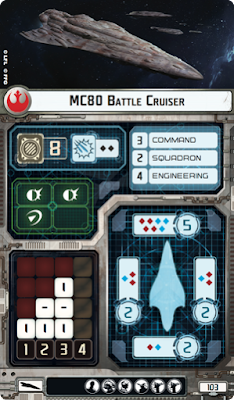 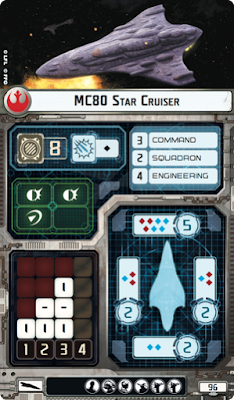 The MC80 Star Cruiser comes in less expensive at 96 points, trading Red for Blue in the front and rear for 3 Red / 4 Blue front, 2 Red / 1 Blue sides, 2 Blue rear.  It also loses one of the two anti-squadron dice for 1 Black.

Commanders:  Mothma and Ackbar get very little mileage out of this ship.  Mothma because no evades anywhere and Ackbar because this ship doesn't want to point anything but the front at the enemy.  Dodonna can rest easy on a flagship that has a lot of ways to do critical damage in large chunks.  Garm likes any Command 3 ships, though the lack of Squadron Value makes it less ideal for a traditional Garm list.  That being said, Garm is flexable, and may see a resurgence with Liberties leading the way.  Rieekan can appreciate any ship that wants to crash head first into the fray.

For new commanders, like Mothma and Ackbar, Cracken isn't the right commander for this ship.  Madine though can take the ship's biggest weakness (ability to turn) and make it into a strength.  3 Yaw at speed 2 is plenty to keep the enemy in your sights.

Titles:  The namesake Title - Liberty - is inexpensive enough at 3 points to consider.  With it and a way of generating Squadron tokens you can turn your MC80 into a viable squadron platform, or just give it a couple of easy activations each turn.  Consider Raymus Antilles and the Liberty title to give yourself a 4 squadron activation.

Endeavor is the next cheapest title, at 4 points.  It does nothing more than give your MC80 Liberty-Class a Contain token - good for a 8 hull ship that does want to get up close and personal.  A nice workhorse title.

Mon Karren is probably the title people are most excited for though.  For 8 points, it limits how many defense tokens a defender can spend when you are firing at them to a single token.  Admittedly, this is 8 points on a ship that can take XI7 Turbolasers AND Heavy Turbolaser Turrets or Quad Turbolaser Cannons AND H9 Turbolasers.  But it is cheaper than both those options, and combos exceptionally well with a Star Cruiser equipped with Overload Pulse or SW7s.

Officers:  Liaisons and the like work really well on any Command Value 3 ship, so moving on...

Raymus Antilles has a real home on this ship, particularly with all the shenanigans that you can get into with both a Fire Team and a Support Team.  Adar Tallon might make it onboard if you have a Liberty title and some other way of feeding Squadron tokens.  Lando fits well on a ship that wants to fly right at a problem and tumble with it.  Walex can get you back that spent Redirect token, I guess?  Leia isn't the right fit.  Toryn Farr may enjoy being on this ship as well, as it is likely to be in the middle of the fighting.

Intel Officer is good on any ship with a large dice pool, and has a bit of a combo with (and some redundancy to) the Mon Karren title.  Chart Officer is interesting if you have 2 points to spare, though making every TRC90 into a poor man's Jaina's Light seems like a better use of it.

Weapons Teams:  Gunnery Team feels as much of an auto-include as it does on the ISD2.  For other options...

Ordinance Experts are a definite no for this ship - no Black dice except for anti-squadron.  Likewise Ruthless Strategists feel like a waste on a ship this size that want to shoot at other big ships.  Sensor Team and Quad Turbolaser Cannon could become good friends, putting out enough accuracy to reliably hit whatever they are aiming at.

Finally, Fire-Control Team, if it works as written in the writeup, is an interesting option as well.  It combos well with a lot of Ion Cannon cards on the field (looking at you Ion Cannon Battery!) and makes the XX-9 playable.  Probably less good than either Gunnery Teams or Veteran Gunners, but they could find a role as cheap filler points or with some crazy combo.

Support Teams:  Engine Techs make you zoom, if you do lots of engineering commands.  Works well with Madine.  Engineering Team and Garm can work together to let you repair hull with a token.  Nav Team might be better than Engine Techs on this ship to let you turn tighter without zooming out of position.  Projection Experts are probably best kept at home though.

Medical Team is cheap if nothing else strikes your fancy.

Ion Cannons:  Leading Shots will work well on the Battle Cruiser variant with its 4 Red Dice being fickle as they are, while SW7s go better on the Star Cruiser if you aren't playing for criticals.  If you do want to hunt criticals, Ion Cannon Batteries can give a bit of control, or squeeze in one more hull damage for XX-9s to trigger on.  NK-7 Ions can be good for making an Admonition sweat.  We have already talked a lot about Overload Pulse and Mon Karren.

High Capacity Ions don't really work well with this ship, as they are side arc boosters.  MS-1 Ions could be a good option though, especially due to how inexpensive they are.

Not Enhanced Armaments obviously.  H9 Turbolasers seem like a good combination for Quad Turbolasers Cannons in that you are almost guaranteed 2 accuracies.  Pair with SW-7s for maximum not caring about dice results.  Heavy Turbolaser Turrets are cheaper than Mon Karren for about the same result - consider if you don't want to go turbolaser crazy or you would rather take Endeavor.

Slaved Turrets could be interesting to consider, especially on a ship taking something besides Gunnery Team.  Consider it with XX-9s, Fire-Control Team, Mon Karren and Leading Shots to maximize your one shot from the front.  Or with Veteran Gunners to get more chances for damage in on the Overload Pulse critical fishing expedition

XI7s are what they are.  Cheaper than Mon Karren, but not as effective.  See Heavy Turbolasers for usage guidelines.

Finally, Spinal Armaments are just straight up more damage potential.  Use with Gunnery Team for more damage from the big front on multiple targets.  Note that it is a Modification - you can't take it and Enhanced Armaments / High Capacity Ions.


Centerpiece - It is a large ship with redundant braces that costs nearly 100 points.  It can definitely be the big ship in your fleet.  Unfortunately it does not have a Defensive Retrofit, and it does want to fly right into the fight, so consider that as an issue before making it your flagship.

Area Denial - 7 dice at medium range puts a large section of the board into a danger zone where your opponent does not want to be.  Good for discouraging opponents from moving for objectives you want for yourself.

Heavy Hitter - There are plenty of combinations we already discussed with the ship that let it punch hard in the enemy's face.

Ion Cannon Platform - Between Mon Karren and Overload Pulse, you can punch hard and still set up for the next shot.

To quote my Victory Star Destroyer article - the MC80 Liberty-Class is not a subtle ship.  You will know exactly what it is planning on doing.  But it has the potential to be a terror on the battlefield.
Incoming Transmission From: Biggs at 13:53
Email ThisBlogThis!Share to TwitterShare to FacebookShare to Pinterest
Labels: Armada, Commander's Guide, MC80 Battle Cruiser, MC80 Liberty-Class, MC80 Star Cruiser, Rebels, Wave 4