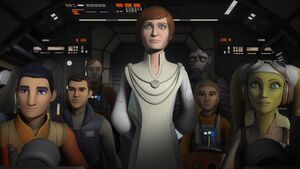 The final Rebel in our 1.5 re-look series will be Mon Mothma. Before diving into her, we just want to acknowledge that, yes, Garm and Rieekan also got 1.5 tweaks. Rieekan’s marginal point increase and Garm’s added flexibility, though, don’t meaningfully change those commanders in a substantial way in our eyes. They are just as viable as they were before the tweaks, nor will their preferred fleet builds really change. If you want some ideas for Garm, go check out Biggs’ and Shmitty’s ongoing Dumpster Fire epic. If you want some ideas for Rieekan...well, have you been playing this game? Go check out a Worlds finalist list from any of the last four years.

Now back to Mon Mothma. She is the original MSU queen of Rebels, having come onto the scene back in wave 1. Since then, she has slowly fallen out of use. Part of that was getting edged out by other commanders that fill that same MSU niche. Cracken was the first, but Rieekan has become the dominant choice of MSU. The second, and bigger part in my opinion, is the decline of MSU as a whole. The game has increasingly become about big ships and big activations, which was crystalized by Pryce, Strategic Advisor, and Bail. 1.0 MSU relied heavily on activation advantage. Once flotillas and activation officers disrupted that advantage, MSU was slowly but surely edged out. Small ships and maximum squads still worked well, but Mon Mothma was almost entirely supplanted by Rieekan in that archetype to ensure Yavaris got that one last activation before going down.

So what’s changed? For one, Mothma got cheaper. Not by a whole lot, but 3 points is a small upgrade. It’s only in combination with Rieekan’s increase that you really see the space Mon Mothma might occupy. In 1.0, if you were making an MSU list, Rieekan and Mothma were the same cost. It was hard to see a reason to bring Mothma over a pretty clearly superior ability with Rieekan. Now it’s a 7 point difference. That’s pretty significant. The second change is Mothma now forces re-rolls of two dice at close range instead of one. However, that’s really because of the massive changes to small ships in 1.5 overall. Now that every small ship can evade at close range, obviously Mothma needed a little something extra to set her apparent. The class size check I think is the biggest change in terms of Mothma’s viability. The ability to discard an evade to cancel two dice at medium range is pretty great.

Mothma’s fate will be inextricably linked with that of small ships as a whole in 1.5. The activation changes in particular are a pretty big wild card. On the one hand, you don’t need to invest in flotillas for activation padding anymore, instead taking more actual combat power. On the other hand, the evade changes may or may not be enough to compensate for the last/first becoming much more difficult. MSU relied on last/first more than any other archetype, so the pass mechanics may very well hurt Mothma and MSU rather than help. With that in mind, let’s have a look at what a Mothma 1.5 list might look like:

I’m not going to lie, I threw this list together in about two minutes just to have a Mothma list to talk about. If you want a real Mothma list, go bug Ardaedhel over on the Star Wars Armada Discord (https://discord.gg/vwDjsBZSNW if you didn’t know it existed). He’s been the crazy guy sticking with Mothma through thick and thin over the years.

What I do know is that when you’re making a Mothma list, it should include as many MC30s as you can cram in there. Mothma synergizes best with the MC30 Torpedo, which wants to get into medium and close range. It’s at that range where Mothma makes a big difference. It’s a knife fighting list that wants to pack a lot of damage into furious close range exchanges. Sometimes you need finishers in a list like that, though, which is where the CR90s come in. TRC90s are some of the most reliable damage dealers around. If something limps away from an MC30, the 90s can hang back for pursuit. Oh yeah, and Shara and Tycho are there for a screen. Hey, I TOLD YOU I only took about two minutes on this list. I have no idea if it will work, but will sure be fun to try.