That's it.  That's the article.

You can move on now.

Okay, we've scared off everyone too WEAK to see the potential of Special K v1.5, and the things he can do.  You will NOT be denied the glory of a Special K victory.  And I'm here to help. 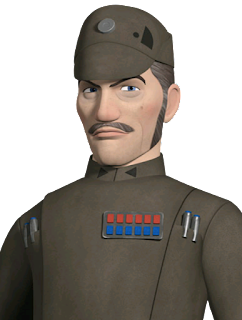 Let's get ready to rock.
"At the start of each Status Phase, you may choose any number of enemy ships at distance 1-5 of at least 2 friendly non-flotilla ships, 1 of which must be of medium or larger size class.  For each chosen ship, you may discard one (maneuver) token from it or increase or decrease its speed by 1 to a minimum of speed 1."

So what's changed?  The big change is that you no longer need 2 medium / large base ships to use his ability.  The other is that you can now strip tokens in addition to speed changes.  This is a significant buff to some of the things that really hurt Konstantine, namely list construction restrictions (2 medium / large minimum, oof) and having no way to stop your opponent from stacking navigations and just ignoring your speed changes.

So... how do we leverage Konstantine to get a good use out of his new, improved ability? 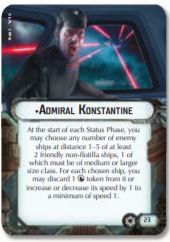 Here we have a list to maximize his ability to get your opponent exactly where you want them.  Surprise Attack is an obvious objective for this list, as is Rift Ambush - both muck around with speed and obstacle deployments.  Infested Fields is another key obstacle deployment objective, and will probably be the one you are playing most often.  In any case, use the obstacles as a way to safely bring Gar Saxon into the fight, keeping him from being engaged by leapfrogging rocks until he gets to the target you want to raid.

The key upgrade is the Ion Cannon Batteries on each ship.  You want to use them to strip shields, primarily, but they can be flexed to strip tokens so that Konstantine can make speed changes.  Grav Well Projectors combine with this to really slow your opponent down.  All ships involved want to keep their distance to some extent, from the Arquiten that definitely wants long range, to the Interdictor and Raider that are comfortable with a long range shot before closing to medium, to the Insidious which wants to live at medium in your opponent's rear arc.

The squadrons are a speed bump while you mop up their carriers.

Good hunting out there.  Let's get our beautiful boy out of the flaming tire fire of "F" commanders into the winners circle where he belongs.

"I've had enough of your games, Grand Admiral."