Biggs checking in for Store Championship Season!  Here's what I'm going to be taking my local gaming store's Store Championship.  In attendance will be Chris Jantzi (Top 32 Worlds, 2017), Angelo Butera (Top 8 Worlds, 2016), Daniel "DabDarklighter", and Q (2 time US Nationals Champion, coming from out of town).  Gonna have to bring my A game to win big here. 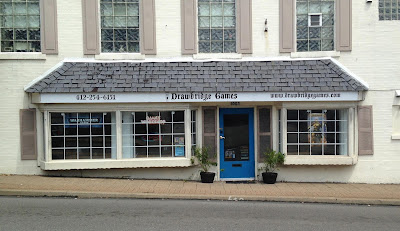 I am not a fan of non-combat ships, or high variance lists, so I have geared my capital ships at the least for bear.  The linchpin of the fleet is the Defiance Command Cruiser, the flagship of Commander Garm, and source of 4 (+1) squadron activations plus a respectable damage output of Defiance and Leading Shots.  It is able to get into position and quickly respond to opportunities and threats thanks to Engine Techs and Navigation tokens.  Those tokens are fed to it via the GR-75 with Comms Net, who helps replenish the tokens between the initial Garm start of game fillup and the Round 5 top off.

Two CR90A's add cheap, reliable firepower to the mix, enough guns and reach to set a Demo trap that requires at least some respect.  With their speed and maneuverability I can get them where they need to be, and starting Garm token will be a Navigate to give them even more flexibility on Turn 1.

Squadrons are my favorite part of this list.  I had to go a bit firepower heavy from ships, because the firepower from the squadrons is comparably lower, but I did bring a lot of it.  4 A-Wings and 4 E-Wings, with both named A's and the sole named E as part of the compliment.  The A-Wings use their Speed 5 to intercept the enemy fighters / bombers, while the E-Wings nip around the edges with their Snipe keyword.  The enemy meanwhile is forced to attack the A-Wings first, and get to experience their Counter 2.  No Escort, but if the squadron game is played right, no Escort is needed.

I obviously have no bid, and expect to go Second Player for most of my games.  As such, Defiance has a chance to shine.  But my objectives are set to give me points at the expense of my opponents.  Most Wanted is the most obvious point generator, letting me offer up a bonus 18 with my GR-75, while potentially grabbing a big score from a fat slow moving ship.  Fighter Ambush is an odd-ball, but it lets me get fighters potentially closer to the enemy, or conduct bombing runs on weakened enemies to score extra points.  I'm really counting on my fighter cover though, if I run into something that likes Fighter Ambush.  Superior Positions is again something that I rely on my fighter cover to help with, but with my fast ships and speed 5 squadrons, I have a good chance to score some extra points against anyone that wants to drive straight at me.  These objectives give me the best shot at winning big, which will be crucial if I want to win the whole thing.
Incoming Transmission From: Biggs at 12:00
Email ThisBlogThis!Share to TwitterShare to FacebookShare to Pinterest
Labels: Garm Bel Iblis, List Building, Store Championships, Strategy