Since Wave 1 we have had expensive battleships that could double as a carrier, and Wave 3 gave us the flotilla, a support ship that had the primary role of a pocket carrier, but never have we had an actual dedicated carrier ship.  Wave 6 fixes this for the Empire, but adding the Quasar Fire Class Cruiser-Carrier. 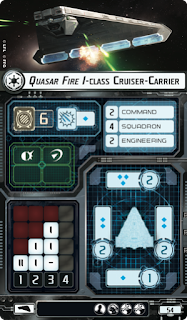 No one is going to mistake this for a serious combat ship.  A 6 Hull, medium base ship (8 hull with Motti) seems reasonably tough at first, but it sports the same shields and guns as a CR90.  The Quasar comes with 2 shields in the Fore and Sides, and just one in the Aft.  Furthermore, the arcs on the ship give it a HUGE fore, allowing enemy ships to focus their fire on one location.  It's 2 Engineering Value is also the lowest of any Command 2 ship, and by far the lowest of any Medium base ship.  It's defense tokens also leave much to be desired.  No Evades.  Only two tokens total, a Brace and a Redirect.  While it can take a hit, it won't hold up to sustained fire by any means.

For maneuverability, it has a similar speed and yaw to an ISD.  Not bad, but not the best ship in the fleet by any means.  No support teams available to help it maneuver, but all versions can take Weapons Teams, Offensive Retrofits, and Officers, in addition to the Titles and Commanders.  With a Command of 2 is it flexible enough, and can pick up a Skilled First Officer to protect it from Slicer Tools (or the elder Syndulla).

But the big reason why this is an awesome new ship for the Empire is the Squadron Value of 4.

The I-Class is Imperial efficiency at its finest - adhering to the role the ship was designed to fill.  First, it comes cheap at just 54 points, just 8 points more than the 2 Gozantis that it would replace as a carrier, or 19 points cheaper than a 3 Squadron VSD-I.  The I-Class gives the ship 3 Blues Fore, 2 Blues to the Side, and 1 Blue Aft, as well as a single Blue die for anti-squadron.

For upgrades, the ship boasts a double Offensive Retrofit, matching the much more expensive ISD-I as the only ships capable of taking both Boosted Comms and Expanded Hangers. 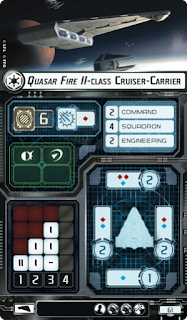 What's more, the ship boasts double Weapons Teams, the first ship to do so.  If you ever wanted to combine Ruthless Strategists and Flight Controllers, now is your chance!  The drawback of course is that for all this, you are paying a small premium (61 points) over the I-Class.

First, what commander belongs on the ship?  It doesn't really have the speed or defenses to be a true Flagship, though an argument could be made that you're trying to keep it out of the fight, especially with Boosted Comms equipped.  Better to ask what Commander helps the ship the most?  (Put the commander somewhere else!)

Motti is an obvious option, as he helps everyone and pumps the ship's hull from a 6 to an 8.  Sloan is an exciting new option, improving the non-Rogue squadrons with Blue or Red dice pools, squadrons that you will definitely be taking with this fleet.  Konstantine even gets a boost, as this is the least expensive Medium base ship in the game.  Tarkin or Moff Jerjerod are options as well, giving the ship a better chance at maneuvering out of danger without being forced to take navigate commands (or in Tarkin's case, getting extra squadron tokens).

Screed and Vader are the least effective, as the ship isn't likely to fire often.  Though something could be said for both, as the ship has no good way of manipulating its dice besides Veteran Gunners.  Ozzel kinda works and kinda doesn't.  On one hand, going from speed 1 to speed 3, or speed 3 to speed 1 is an excellent trick for this ship, but on the other hand it really doesn't have the luxury of dialing up squadron commands.  Tagge... is Tagge.  If you're taking enough fire to use him, you likely are too late to need him!

Titles for the ship let it do quite different roles within your fleet: 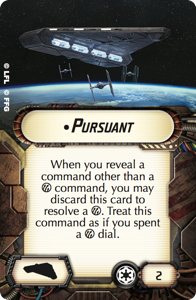 Pursuant (2 points) allows you to double up on commands with a free Squadron command for a single turn, especially helpful if you need to maneuver out of the way of enemy forces, or got Slicer Tooled / Syndulla'd.  Probably the best paired with a simple Skilled First Officer to use it offensively, or even to double up using it defensively if your opponent is expected to play a Slicer Tool heavy list. 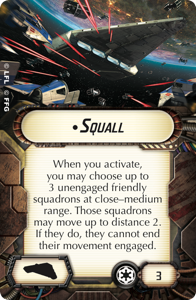 Squall (3 points) - in spite of being the name of the most emo of Final Fantasy's main protagonists, the Squall helps move things around, in spite of not having access to a Support Team for Fighter Coordination Teams.  Unfortunately, the "cannot end their movement engaged" restriction means no Mauler Mithel shenanigans, but this is still a good title for getting some of your larger squadrons into the fight, particularly slower moving heavy hitters.  Firesprays, Decimators, and YV-666s all benefit from the extra speed, but more importantly you can do some Strategic shenanigans with the Lambda Shuttle. 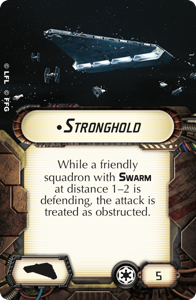 Stronghold (5 points) is the cure for what ails your Swarm squadrons.  3 or 4 hull squadrons aren't meant to eat anti-squadron firepower, so Stronghold keeps them safe.  Almost feels required if you're running a TIE blob with Sloan in command.  Actually counters the Red anti-squadron on the Quasar II.

Admiral Chiraneau almost seems an obvious option when you're moving about 5 squadrons somewhere around the board, allowing quality repositioning and you to dictate the terms of engagement for the squadron fight.  Likewise Wulff and Aresko are both officers that let you either maximize your squadron command (always useful) or fit in a speed change in an emergency.  That being said, both their jobs can be accomplished by a Comms Net flotilla, so consider that as an option as well.  The Grand Inquisitor likewise allows for speed fluctuations, or if you are committed to Speed 3, Admiral Montferrat is a fine defensive option.

For cheaper options, Agent Kallus practically comes stapled to the Quasar II.  Flight Commander and Veteran Captain are other fine choices for a squadron pusher.  Minister Tua can give you some much needed survivability.  Skilled First Officer lets you switch from squadron commands to something else in a pinch.  And Hondo is friend to all, and happy to assist you in navigating away from that MC80, which incidentally now has a Concentrate Fire command which he has no idea how it could have banked such a thing.

Is this the proper ship for a boarding team?  Certainly it can take one.  Boarding Troopers and Boarding Engineers are both cheap, and you're certainly likely to have squadron commands lined up.  But I think for the most part this is not the ship for this.  Both teams are not particularly great for the Quasar for the simple fact that you have to get all up in the face of the enemy, and that is not a place this ship wants to be.  Could you do it?  Yes.  Should you?  Probably not.  Boarding Troops doesn't even help your ship all that much, as you don't have the guns to capitalize on it.  Boarding Engineers requires you to crash in when a ship is already damaged, and even then you don't have that much Engineering Value to cash in on.  Leave it for the ISDs and Raiders.

Disposable Capacitors are cheap, and another option that lets you hang around at long range.  Note that it doesn't work with your anti-squadron barrage.

If you insist on crashing forward into things, Rapid Launch Bays are the other end of the spectrum, letting you bring TIE Bombers or Firesprays right up into the thick of the fight.  It does work with Expanded Hanger Bay for a 5 squadron surprise!

IT'S A SQUADRON PUSHER.  That's what it is.  Don't try and get too fancy with it.

Less than the cost of a naked VSD, and you get long range squadron commands, the ability to stay at long range and still toss commands (between Skilled FO and Pursuant giving you navigational freedom), and better anti-squadron guns for 5 different fighters.  Not too bad.

Another Christmas Tree, but this one is a bigger prize.  But now you are throwing 6 TIEs, and protecting them from anti-squadron fire until you throw them.  A reasonable Sloan setup, or drop Stronghold for a deadly TIE Defender hub.

You can use the thing as an anti-squadron battery as well, if you get creative.

Not as many squadrons to push, but what an anti-squadron barrage you can put down!  Fly something fat and cheap into the enemy blob, and gun away!  Even if you don't hit, you're doing damage, and with your large front arc you're guaranteed to have a lot of targets.

Okay, so you really want to crash in?

I know it looks like most of these guys are kitted out like an ISD Christmas Tree, but I think they almost have to take a little bit of upgrades in order to properly shine.  Consider that the upgrades are what sets these apart from just using Gozantis to push your squadrons around.  You've got to get your money's worth from the opportunity cost of not getting more activations.
Incoming Transmission From: Biggs at 08:00
Email ThisBlogThis!Share to TwitterShare to FacebookShare to Pinterest
Labels: Commander's Guide, List Building, Quasar Fire Class Carrier, Quasar Fire I-Class, Quasar Fire II-Class, Star Wars Armada, Wave 6