Only two cards left from Wave 5 for us to go over.  Let's get the Ordnance Upgrade out of the way. 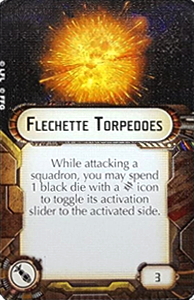 While attacking a squadron, you may spend 1 Black die with a Critical icon to toggle its activation slider to the activated side.

We've already talked in length about how to apply this upgrade to the Raider Class Corvette.  There's not a lot of ships that can even make use of this upgrade.  For the Rebels, there is currently only the Pelta-Class Assault Ship, which has a single Black die, and no reasonable way to get rerolls for it.  The Imperials get the Raider-I Class Corvette.  Although technically with Kallus it could be used with a Victory I-Class Star Destroyer or either Gladiator-Class Star Destroyer, adding the Black die after the fact and rerolling with Ordnance Expert.  Pros:  It works out to Medium range!  Cons:  It is one die and only works with unique squadrons.

Rebels get an alternative platform in Wave 6 with the Hammerhead Torpedo Corvette, sporting a single Black anti-squadron die, but also a Weapons Team for Ordnance Expert rerolls.  Interestingly, Task Force Organa could be useful for a Hammerhead geared for this purpose, as you can use the reroll on squadron attacks, and perhaps more importantly the limitation for TF:O prevents you from attacking only ships.  Consider the following:

That's 84 points of ships that do dual duty as anti-ship and anti-squadron, and you can play with the activation order to ensure that the right one is activated first to have the biggest impact on the board space.  I'm sure I'll talk about this more later in the actual Hammerhead article.

Finally, it cannot be stressed how useful this upgrade is, despite its range limitations.  Activating squadrons is very, very useful.  Hence the popularity of Dutch as a squadron.  Unlike Dutch, because of the timing of "spend", you can even use this to activate Scatter Aces.  Give this upgrade a try, you won't regret it.
Incoming Transmission From: Biggs at 08:00
Email ThisBlogThis!Share to TwitterShare to FacebookShare to Pinterest
Labels: Hammerhead Corvette, List Building, Ordnance Upgrades, Star Wars Armada, Wave 5, Wave 6