Two new commanders join in Wave 6, one for each side.  Let's take a look at one of them today and see what they each add to the mix. 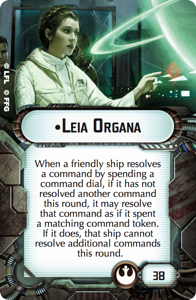 When a friendly ship resolves a command by spending a command dial, if it has not resolved another command this round, it may resolve that command as if it spent a matching command token.  If it does, that ship cannot resolve additional commands this round.

Supercharger your commands, at the cost of a single command per turn.  There's not only power to her ability but also flexibility.  Unlike Garm, who adds tokens on Turn 1 and Turn 5, she powers up your command dials each turn, and isn't limited by Command Value how many times she can boost it.  Unlike Tarkin, a comparable in cost Imperial commander, she doesn't require every ship to get the same token boosted.

Where she looses out is that she doesn't increase the flexibility of any individual ship.  While it retains the ability to do as many commands as it has tokens and dials to spend, you can't do multiple commands if you want to trigger her power.  With this in mind, she becomes a very difficult commander to build around.  Consider the commands and the boost you are given by doing a dial plus token:

You are specifically looking for ships that will be boosted by that set of abilities.

Flotillas, distasteful things that they are, make an obvious answer to the question.  4 Squadrons per flotilla activation (assuming expanded hanger) is a pretty good way to start.  8 squadron activations from 46 points of ships is not too bad at all.  The MC80 Liberty, particularly with the title, loves this too.  Yavaris loves this as well for obvious reasons.

An MC80 or Pelta with Projection Experts can heal the fleet for 2 shields while effectively losing none of their own.  Corvettes can repair hull instead of just shields.  The Redemption can do it too if you just hate Peltas or something.

The MC80 Liberty loves going Speed 3 to Speed 1 and the other way around as well.  CR90s and MC30s love extreme speed changes.  Hell, so does the Nebulon B, and I would assume the Hammerhead loves to throttle up to get out of dodge as well.  Basically anything not named "Home".

The final question is what on earth do you stick her on?  Probably the MC80 Liberty.  Maybe the actual Liberty?  Consider this list:

Not a bad jumping off point.  Leia lets you activate your squadrons between 2 ships, and the Task Force Corvettes add some damage to the party.  You can even swap the Flechettes on the one for External Racks if you think you need extra dice.

What do you think?  How are you going to leverage Leia's powerful, but expensive ability in the upcoming months?  Post your best ideas in the comments below!
Incoming Transmission From: Biggs at 09:00
Email ThisBlogThis!Share to TwitterShare to FacebookShare to Pinterest
Labels: Commanders, Leia Organa, List Building, Wave 6