Okay last one for Wave 5! 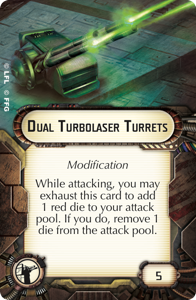 
MODIFICATION - While attacking, you may exhaust this card to add 1 Red die to your attack pool.  If you do, remove 1 die from the attack pool.

So, what ships like Dual Turbolaser Turrets?  The answer is ships that have Red dice (or at least fickle dice) out of multiple hull zones.  Dual Turbolasers are strictly worse than other Modifications, like Spinal Armaments or Enhanced Armaments, from the prospect of a damage ceiling.  Strictly speaking, each of those others increases the amount of potential damage you could do, while Dual Turbolasers may cause you to remove damage.  This is mitigated by the number of dice you would conceivably throw (giving you a better chance at rolling a blank), and by the fact that it works on any arc, not just the front/back or side arcs.

The other thing you have to compare it to is the King of Red Dice Manipulation, Turbolaser Reroute Circuit (TRC).  TRC wants to be on anything with redundant Evade tokens, so worst case scenario, you get a shot off and still have an Evade to use for defense.  The MC-30 Scout and CR90-A are prime examples of ships that love the TRC.

Ships with a single Evade can take a TRC, but at the detriment of their defense.  The Arquitens-Class Light Cruiser and the Nebulon B Frigate are examples of ships that would rather save their Evades for long range duels.  Also being cheep ships, they are a fine place for the Dual Turbolasers to find a home.  However, because their best arcs are in one specific location, if you have the points to burn, Spinals / Enhanced are strictly a better buy.  Assault Frigate MkIIs on the other hand are an excellent home.  Plenty of dice from each arc, and you frankly want to double arc with the ships.

A few things to note about the upgrade and how it works:  Due to timing, you CAN remove the Red die you just rolled into your attack pool.  However, you are not able to use any other reroll abilities until after you choose which die to remove.

The other thing is that you can use it for anti-squadron shots, so if there is a squadron that you just MUST HAVE DEAD this little guy can help!
Incoming Transmission From: Biggs at 08:00
Email ThisBlogThis!Share to TwitterShare to FacebookShare to Pinterest
Labels: List Building, Star Wars Armada, Turbolaser Upgrades, Wave 5