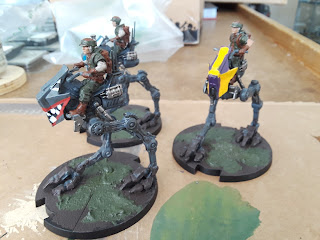 The AT-RT, not exactly the most well known weapon in the arsenal of the Rebel Alliance.  This Clone War era weapon is back and it isn't spectacular, as you might expect from old technology.  This is the Rebel's first Support unit, which you can take up to three in a standard game.  Let's take a look at it and see how it fits into the Rebel's game plan. 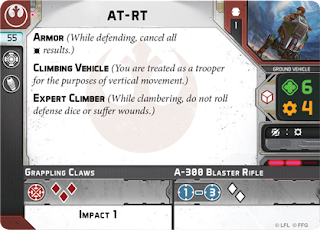 The AT-RT comes in at 55 points, putting it just a little bit more expensive than a Rebel Trooper unit without any upgrades.  Offensively it doesn't have anything spectacular for initial stats:  Shoot the Blaster Rifle the guy on top is hanging on to for 2 White dice up to Range 3, or get into melee and savage someone with 3 Red dice (and Impact 1 if you're expecting to melee something with armor...)  On the plus side, offensive surges convert directly into critical hits, so you'll be that much more likely to sneak something through heavy cover and dodges.  You also get one Hard Point upgrade, and that is where the AT-RT becomes more useful.

Defensively, the AT-RT is more fragile than you would think.  A white defensive die and no defensive surges means that things that hit it are almost certain to damage it.  While it does have Armor, most Imperial things on the board have Impact, which may make it ironically better in a Rebel / Rebel mirror match.  While it has 6 health (4 to become damaged) it doesn't have to worry about losing much in the way of effectiveness while it takes damage, unlike a trooper squad which will lose minis, and become suppressed.  However, as a Ground Vehicle it won't be as easily able to take advantage of cover as the Trooper units, instead relying heavily on that Armor keyword.

It also can rely on maneuverability, and while it doesn't have the compulsory move, it does move at a respectable Speed 2, and due to its base size , and can use Climbing Vehicle and Expert Climber to get places you would think it doesn't belong.

Other than the Hardpoint upgrade, it also has a Comms upgrade.  Good for either taking the Long Range Comms, or the Comm Jammer if you intent to crash into the enemy at full speed.

As a Ground Vehicle, don't forget that your troopers can use it for cover.  It doesn't count as terrain for clearing Hostile Environment condition card suppression though, so keep that in mind before you have a team of troopers follow it towards a target. 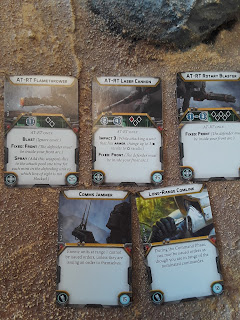 There isn't a lot of customization you can do with the AT-RT, only two upgrade slots exist for you to play around with.  One is a Hardpoint, giving you access to one of three heavy weapons to make your AT-RT into more of a threat on the battlefield, while the other is a Comms upgrade, giving you the choice of either Long Range Comms or the Comm Jammer.

You should note that the Comms Jammer does not come with the core set AT-RT, so if you want to run that on your AT-RTs, you'll need to either pick up the AT-RT expansion set, or one of the other expansions that the Comm Jammer comes with (Airspeeder, Speeder Bikes, AT-ST).

Without further ado, let's actually look at the upgrades and see which work well for you:

AT-RT Flamethrower - 25 points - It doesn't look like that great of a weapon until you start looking at the keywords.  Range 1 and 2 Black dice (.625 damage per dice with surges on Black dice) isn't anything impressive.  What is impressive though are Blast (Ignore Cover) and Spray (Add weapon dice once per model).  That means if you're shooting a 6 man trooper team, you're chucking 12 Black dice at them, at .625 damage per dice, for an average roll of 7.5 damage per save, ignoring cover (but not dodge, notably).

That's a LOT of dice and a lot of damage, if for a very specific set of circumstances.  And it's on a unit that isn't exactly going to weather a ton of enemy fire.  Still that is 80 total points for some excellent anti-trooper weaponry.  If you can get it into range, it will mulch Trooper squads like nothing else.  The biggest drawback it has is that it just doesn't do anything against Armored targets like the AT-ST, other AT-RTs or the Airspeeder, and is likewise fairly worthless against other non-Corps units like Luke, Vader, or Speeder Bikes.

AT-RT Laser Cannon - 35 points - This is the opposite of the Flamethrower.  It is the starting Rebel's only Range 4 weapon, the cheapest way for the Rebels to get more than Impact 1 on one of their units, and hits respectably well (2.125 average damage and 58% chance to get at least one critical to bypass heavy cover.)

Still, that's not a TON of damage against infantry, and if you aren't running a Wolfpack of these to hunt an AT-ST / Airspeeder / other AT-RTs, you're not going to be doing much more than dump suppression on things, and maybe popping a single trooper.  Not that Range 4 suppression is bad, but pulling models of the board would be better.  It is also notably bad against Speeder Bikes.

AT-RT Rotary Blaster - 30 points - The happy medium.  5 black dice regardless of the number of enemies, range 3, and no fancy keywords besides the standard Fixed: Front.  You're looking at 3.125 damage per attack, and a 76% chance of hitting at least one critical or an average of 1.25 critical hits.  It is the best weapon you have for hitting Speeder Bikes, will do respectable work against troopers, can actually do something to Luke / Vader.  This is going to be your all-rounder unless you have a game plan that involves something else.  Plus you get to make a "BRRRRRTTTTT" noise when you roll the dice, like you're blasting someone with an A-10 Warthog's nose cannon.

Long-Range Commlink - 10 points - You know the drill here already, you can gain orders as though you were in range, even though you aren't.  Good if you're using a group of these as Cavalry to hit a weak enemy flank, while your commander has to hang with the main trooper push.  Probably better to leave this one at home, especially if Luke has grabbed Battle Meditation or you're rolling in with a plan to use combined arms.

Comm Jammer - 15 points - I'm not sure it is worth the effort.  You're not going to be able to use this like the Airspeeder uses it, as you aren't able to speed 3 compulsory move into the middle of a group of enemies.  There's some idea towards putting this on a Flamethrower AT-RT, and running straight at an enemy, but that's a lot of points invested on not the most robust platform.

Nothing fancy here, just grab the right weapon for the job and slap it on your AT-RT.  I don't think running one of these naked is a good idea when you can get a 5 mini Trooper unit for 5 points cheaper, with 1 less health, 3 dice more damage, and better access to cover and objective play.  So unless you've already capped out your Corps maximium, have 55 points available but not 80 points, there is no reason to have one running around without a weapon attached.

Okay, I lied, I can think of one other option.  An AT-RT with Comm Jammer rushing to get into melee range with its enemies.  Shoot the 70 point AT-RT, please, and ignore the 85 point AT-RTs and 77 point Trooper squads nearby.  Or get mauled by 3 Red dice at 2.6 average damage and screw up your commands.

Want to get Biggs' look?  In other words, want your minis to look good from about arms length from your face?  Here's what I did to paint these guys:

Prime your minis!  I used a Army Painter grey primer.

Wash:
Hit that whole sucker with as much Agrax Earthshade as you can layer on.  Pilot and Mech both.  Get in all the nooks and crannies.  That looks good, doesn't it?  Almost looks done, but we can get a little bit fancier if we've got the time.

Drybrush:
I hit the pilot with some Cadian Fleshtone in the face, or on the arms if I wanted one with short sleeves.  You can use some other flesh color to give some diversity to your rebel squad.  Otherwise the wash made them look pretty darn good.  On to the highlights!

Highlights:
Want to get the "shark" look from the AT-RT in the foreground above?  Wild Rider Red and White Scar (carefully water down your whites!  You may need multiple layers!) with Abaddon Black to help with the eyes / mouth.  Don't worry about sloppiness, these were hastily painted by Rebels without any formal painting training.

Basing:
I've been doing Black for unit leaders, so these got Abaddon Black around their base, as they are the Leader of their 1 mini unit.  However, on top of the Abbadon Black I used a Dry Brush to apply Stirland Mud to the the base, and to muddy up the AT-RT's walker feet.  Then I added Lustrian Undergrowth to complete the look.  A really good look for a few minutes of work.