On to another Ground Commander's Guide for units.  Today we'll be looking at the T-47 Airspeeder, the Rebel's "Heavy" unit from what I'm going to be calling "Wave 0".  Bringing an Airspeeder is a big investment in points, so you're going to want to ensure that it is worth your time to put one onto the battlefield. 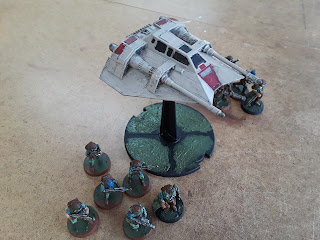 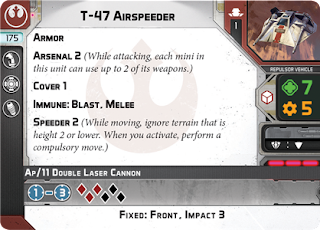 The T-47 is expensive.  The priciest Rebel unit currently in the game, and even announced, it clocks in at nearly 1/4 of your available points at 175.  Combined with Luke Skywalker, if you take a T-47 you are committing half of your list for two units.  So naturally, you want to ensure that the unit you are taking is going to be worth the investment.

The T-47's defense isn't its dice.  If it is hit, with a white defense die and defensive surges, you're only saving 1/3 of anything that does manage to hit you.  The goal of the T-47 is not to be hit at all.  For this, it has the advantage of Cover 1 and Armor.  With Armor, enemies will need to use Impact weapons or get very hot with their attack rolls and get natural criticals to even damage you.  Cover 1 means that they can't ignore you with small arms fire either, because you will automatically cancel one hit prior to Impact changing those hits into criticals - and if they only shot at you with one heavy weapon, you might have avoided damage all together.  Still, your best defense might be the Speed 3 move value, along with Speeder 2.  Basically, obstacles need to be sky high for you to hit them - 99% of anything on the table you're going to be able to (mostly) ignore for movement, which means masking your approach through cover / Line Of Sight breaking terrain.  Also related to your defense is that you're immune to Blast and Melee, meaning Vader has to chuck his lightsaber to even think of damaging you, and you'll always get that cover.

Rounding up defense, you have 7 hull, and it takes 5 to damage you.  If you do get damaged though, bad things could happen.  You'll live or die by your two actions, so "Damaged" is bad enough, potentially getting rid of one of the two.  "Disabled" might be worse, forcing you to spending 2 actions to move more than just your compulsory move.  But the worst of all is "Weapon Destroyed" which will find you with your Ap/11 Double Laser Cannon knocked out of the fight, and whatever backup weapon you have shooting from the rear arc.

Oh, offensively that Ap/11 Double Laser Cannon is very, very good.  3 Red / 3 Black is 3.75 average damage before rerolls, and Impact 3 means you're putting the hurt on anything with Armor.  And it is Fixed: Front, which can be frustrating.  You also have Arsenal 2, and a single hardpoint upgrade, though your options are somewhat limited.

The T-47 Airspeeder can take 3 different upgrades - a Pilot, a Hardpoint, and a Comms.  Let's look at the options:

Wedge Antilles - Pilot - 5 points:  Wedge is an exhaust card that gives you (as a free action) the ability Full Pivot which lets you pivot up to 360 degrees instead of the usual 90 with a move action.  Great for when you flew past something and have to turn around quickly.  If you've got a rear facing weapon, he can be good for spinning around to point the right weapon on the right target.  He's defiantly something that gives more options with your movement, but not necessarily required or even spectacular.  And he can get you into more trouble than he gets you out of if you don't pay attention to where you'll be headed next turn.  Remember, he's an exhaust, so you'll have to Recover if you want to use him more than once a game. 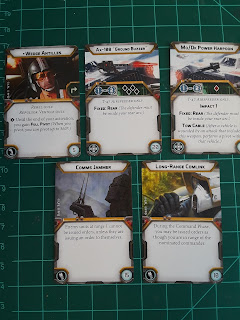 Ax-108 "Ground Buzzer" - Hardpoint - 20 points:  Your anti-infantry upgrade.  Strafe infantry, then next turn fly past, and "Buzz" them.  Nothing but 4 black dice, Range 2, and no keywords other than Fixed: Rear.  Unexciting, but good that the Speeder can hit multiple targets, or just keep on putting fire on something as it flies away.

Mo/Dx Power Harpoon - Hardpoint - 8 points:  "Detach Cable!"  The iconic weapon from the Empire Strikes Back, which takes down an AT-AT.  Also Fixed: Rear but you also get Impact 1 and Tow Cable.  But only 1 Red die means you've got a 75% chance to hit, and an AT-ST is 33% chance to avoid the damage.  Basically, if you hit you'll force your opponent to spend an action to undo the pivot you made his AT-ST perform.  Great if you can time it to hit with an Ion token, but not something you can count on.  It's a desperation move.

Long-Range Comlink - Comms - 10 points - Did Luke grab Battle Meditations?  If yes, leave this upgrade at home.  If no, you'd better have it onboard.  You've got a lot of your army invested in this unit, so you're going to make sure it has the orders to activate at just the correct time.

Comms Jammer - Comms - 15 points - Going to be using this unit to harass the enemy lines?  This is an amazing upgrade.  Close to an AT-ST?  Not going to activate it unless they get lucky pullin' it from the bag.  That being said, at 15 points it is pretty expensive..

Not a lot of ways to customize this guy yet.  I think the most effective way to utilize it though is to go with this combination:

Yes it is expensive.  But set it up on a flank (preferably the one without the AT-ST) and use your first activation (Standing Orders) to get it in the approach, moving last (use a Battle Meditations Luke to give it orders).  Ambush Turn 2 so it can go first, and have it strafe the enemy lines and fly into their backfield.  It can do donuts back there, forcing your opponents to either commit a lot of resources to get rid of it, keeping that pressure off of your objectives, or ignore it and let it chew them up uncontested. 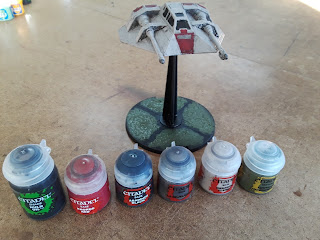 You don't need a lot of paint to make something look really good here.  As you can see, I used 6 different pots to finish a basecoat and wash, and then just drybrushed the same basecoat back over it.

Don't forget to prime your model!

Wash - Nuln Oil - It's "Liquid Skill!"  Make sure you just go nuts with it up into the major crevices, especially the exhaust area in the back.

Once the Nuln Oil is dry, just go over the tan bits again with a drybrush.  That was stupidly easy!

I have been painting all my "Unit Leader" bases black, and hey, this is a unit leader.  So Abaddon Black for the base, with Lust...something Undergrowth to add some grit to it.  Lookin' nice!

You can add highlights from there.  Remember, it just has to look good to you!

That's it for this edition of the Ground Commander's Guide.  I am definitely going to hit some Imperials before we get to the AT-RT, so stay tuned for those!