The State of Armada

It feels weird writing this.  When Legion was first coming out, I joked that it was the new hotness and was pushing Armada aside.  Then the jokes started to feel more real.  Locally, we failed to get enough people for our Quarterly Kit for the first time since... 2015?  When Assault Frigates and VSDs were the biggest things you could put on the table, and squadrons were "bad" before some guy ran maximum A-Wings at Worlds.

So where is Armada now?

I really like where our meta is right now.  The recent FAQ / Tournament Rule updates are a welcome relief to the days of 1 or 2 combat ships and a ton of unarmed transports.  We have multiple great commanders on the Imperial side, and while the Rebels have Raddus, they also have quite a few other competitive commanders that haven't gotten the recent Raddus love.  Really, there are only a few stinkers, out of 10 commanders per side.  Commanders are different enough that fleets with the same ships and same upgrades change play significantly between them.  Squadrons are viable.  Double Large is viable.  Multi-units even did well with Hammerheads and YT-2400s making a strong showing at US Nationals.  An Interdictor based list won a recent major tournament.

Frankly, we are in a really good place right now, in terms of what the factions, and (most) commanders are capable of.  Every ship has its role, and is viable with certain upgrades, certain commanders, or some combination of the two.  We have SO MANY squadrons to choose from, it can be overwhelming.

I cannot wait to see what happens at Worlds.  Raddus may be the front runner, but I'm waiting to see if something out of left field, like 3 AFII + A-Wings, The Clonisher, or JJ's Y-Wing Spam of ages past can take it home.  Maybe someone breaks Konstantine open, and we're all planning how to beat that going forward?

If we aren't the best community in gaming, we're pretty darn close.  I have been impressed with everyone from the start.  Everyone is friendly, minimal arguments at tournaments, and even our most vocal critics on the Forums aren't TOXIC the way other games can be.

I've been listening to the L5R and Legion community, and each are very, very different than Armada.  I've actually considered writing an article in the recent past about whether or not we want to be difficult to approach as a game, and whether the cost in cash and skill for entry to the game has been a good thing for us.  The idea being that it is better for us as a community to be the Red Headed step child of FFG's Star Wars licences, giving us our own play space for Worlds, and overlapping us in such a way that you can't play our game and one of the other games easily.

But even beyond that we've had a great community with contributions from bloggers, podcasters, youtubers, forum members, vassal players, and just ordinary gamers showing up to their store and regional championships.  There are too many people to mention that have made this community what it is, to the point that if I start naming people, I'm going to feel bad because I'm going to leave more people off the list than I'll be able to put down off the top of my head.

So I mean it, if we're not the best, we're darn close.

But we can't be the best everywhere, all the time.  While our smaller size and niche market means that we have attracted and retained good people, it doesn't mean we will grow and thrive anywhere.  And Pittsburgh, my local meta, has been hurting.  At our peak, we had 8 players showing up to Store Championships, and 23 players coming from far afield for our Regionals.  This doesn't make us "big" by any means, but at least respectable.  We're average around 5-6 for our quarterly kits.  You could show up on Wednesday and there'd be two tables in use.  We had a successful Corellian Campaign, after the first one fizzled out.

But the elephant in the room is that there's not really that spark of excitement in Armada right now.  A well balanced meta makes for a good game, but it doesn't exactly wow new people into joining, and it certainly doesn't bring people around when there are shiny things to look at somewhere nearby.  And that brings us to the elephant in the room.

There really should be no competition here, aside from "they're both Star Wars games, and Miniature games, released by FFG."  They don't play similarly, their fluff is completely different.   Armada is a game of patience and careful planning.  Legion is a game about reacting to the moment.  About coming up with a Plan D on the fly after bad luck doomed Plans A-C.

But it is fun, and it has coming into it something I have never seen locally in Armada.  Passion.

People are EXCITED to play Legion. 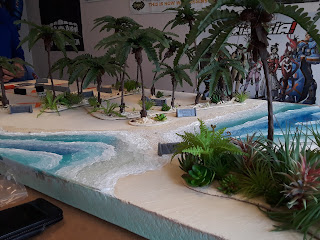 I mean, look at this.  One of our local players made this.  He built this, before Legion came out.  Before he played more than just the demo game.  Before he learned more than a basic understanding of the rules.  Oh, and he's not an Armada player.  Legion is the first miniature game he's ever played.

It's hard to explain what it is about Legion that is giving it that excitement, but it is something that Armada just has never quite had.

And Legion is fun to watch.  It's fun to customize and paint.  It's fun to make your army your own, in ways that Armada just never quite had that appeal.  Let's look at two different pictures: 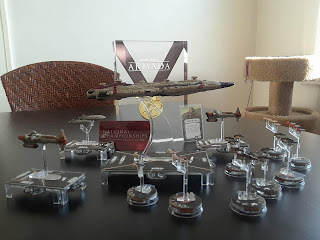 Picture #1:  My Regional Fleet.  I painted my squadrons and my MC80 - "The Compensator".  They look okay.  I've got some customization going.  That's pretty cool.  Corran Horn has a special squadron painted just for him. 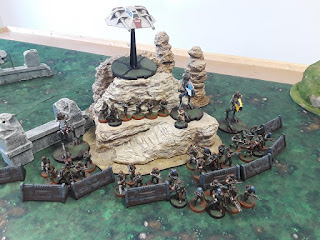 Picture #2:  I painted this.  Everything about this army I made my own.  There's a squad that is 1/2 Duros, because I sliced off the heads off some from other squads and glued them on.  There's a squad that has camo colors because I wanted to see how that would look (okay).  There's an AT-RT with a shark mouth that a cannon comes out of, and all of them have mud splattered on their "feet".  Luke is dressed like a cross between cloud city and Return of the Jedi.

I even speckled mud on the barricades.

This is not to disparage Armada.  It is the "better" game.  It has the tighter rules.  It has less randomness.  It doesn't have #$@%ing defense dice.  You know what the terrain is going to do.  You know where the ships are going to go.  You can plan your attack, and feel great when your plan is executed perfectly from Turn 0 through Turn 6.

To quote a developer of L5R, Armada actually does "provide you with a really interesting challenge and tactical board state, and that feels really rewarding when you do it right. It provides you with a puzzle that’s always fun in every iteration."

Armada is a 5 course dinner.  Legion is a build-your-own-burger bar.

It is hard not to be excited about Legion.  It is infectious.  It is a great game in its own right, and fun to build and play.  And I can find people that want to play Legion while I'm struggling to find people willing to bring their Armada stuff for a tournament.

But I love the game just the same, and I love this community.  Just a little over 2 years ago a challenge was issued, and we collectively rose to meet it.  Let's see how much longer we can keep it rolling.

It's not like I'm going to just stop hosting World Cups after all.
Incoming Transmission From: Biggs at 10:32
Email ThisBlogThis!Share to TwitterShare to FacebookShare to Pinterest
Labels: Community, Star Wars Armada