As much as I want to get to the Speederbikes and AT-ST next, thanks to the Legion Discord Server's Veers Giveaway (and getting very lucky) I'll be doing Veers after this!  But today is for the Empire's first Corps unit, the most iconic (generic) soldier in Star Wars, the Stormtrooper. 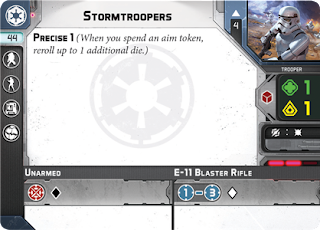 
The Stormtrooper is the Imperial standard trooper, and until the Snowtroopers come out are the only unit in any force that is mandatory - you need at least 3 corps units in any standard size list.  Stormtroopers are a Trooper type unit, and thus able to Claim and hold objectives that your support and heavy units cannot.

The base Stormtrooper squad is 4 minis, for just 44 points, which is the cheapest way for the Empire to get units onto the board.  Each mini has 1 health, and no defensive surges, but gets to roll a Red defense die instead of the White dice of their rebel counterparts, giving them a better defense despite the lack of surge.  This defense die (50% chance to cancel hits) makes Stormtrooper squads properly supported by a commander in heavy cover is a very daunting task to try and remove.

Offensively, the Stormtrooper is less impressive.  While they do boast the offensive surge, their base ranged weapon is the E-11 which rolls just a single white die per mini at range 1-3.  This gives them a 3/8 chance of hitting on any attack roll with it, which while not horrible, is less offensively than the Rebel Trooper's 50% chance.  The offensive surge does work with other squad weapons though, and the Stormtroopers have 2 heavy weapons they can bring to the fight.  It also works with both unarmed attacks, making a fully kitted out Stormtrooper squad (6 minis) as dangerous as Luke in melee combat (6 black attack dice with surge) and they will average 0.625 hits per mini in a melee.  Plus any grenade instantly improves their damage output at Range 1.

In addition to all the ways to improve their damage by taking upgrade cards, Aim actions are inherently better on Stormtroopers.  With a natural Precise 1, they reroll 3 dice with an Aim token before considering any other upgrades they might have.  If you have a way to give them an aim token (not suppressed / New Ways to Motivate / Veers Spotter 2) they can put out a spectacular amount of damage.

For movement, they have a fairly generic Speed 2.  They can take Gear and Grenade upgrades, in addition to the Personnel and Heavy Weapon upgrades.

Stormtroopers can look quite a bit different with the upgrade options available to you right now.  There isn't much difference between the Core Set Stormtrooper card pool and the expansion card pool, aside from Gear and Grenades, so look at what you want you troopers to do before deciding to buy a second core or pick up a Stormtrooper expansion.

Add a Stormtrooper mini for 11 points.  Good for the long term health of your units, and keeping your Heavy Weapons minis safe.  Just generally a quality investment.  Easy to leave out if you need the points, but never a bad idea to take this one.

This is a really, really good heavy weapon for the Stormtroopers.  Increase their maximum range from 3 to 4 with the same minimum of 1.  2 Red dice with offensive surge means you're almost guaranteed (1.75 average) a hit on any given dice.  This lets Stormtrooper teams put suppression on Rebel units from ranges that the Rebels cannot possibly respond from.  Splitting fire with this weapon and the E-11s give the Stormtroopers a ridiculous threat range for pinning enemies down, and adding that 1.75 hit average to the unreliable white dice from the E-11s let them hit hard when trying to focus down a unit in cover.  If you're not including a DLT-19 in your squad you've got to have a very good reason why you're doing something different.  Oh, yeah.  Impact 1 to just make it straight up better.

Oh, look.  Something different.  This weapon will shred anything with Armor, with Impact 3 and 3 Black dice (with surges!)  That's 1.875 average hits from the weapon itself, but when you chuck E-11s at the target as well, you can get to 3 hits for Impact to punch up very quickly.  This is a weapon for focusing of fire.

It is Cumbersome, which means this is going to be more of a defensive weapon for the Stormtroopers, and it does have a Range 1 deadzone if something fast manages to get all up in your grill (only Range 2-4 for the weapon).  In addition to all that, it is an exhaust weapon, so you'll need to keep the Stormtroopers in question away from the thick of the fight in order to use it most effectively.  If playing against an HH-12, you may want to lob a few shots their way just to keep them from reloading easily.


Targeting Scopes - 6 points - Precise 1 gives you an extra reroll when you spend an Aim token.  You already have Precise 1 with the Stormtroopers, and these stack giving you a Precise 2 net.  If you've got a way to get aim tokens, this is great with your fickle, fickle white dice.  Grab this on your bodyguard teams if you're grabbing Veers.

Grappling Hooks - 3 points - Expert Climber isn't anything to write home about, unless you're utilizing a lot of custom terrain.  Leave this upgrade at home if you're playing on a featureless plane, but consider it if you aren't sure what you'll be seeing, or you're expecting to climb into a lot of high ground.

Impact Grenades - 5 points - A chance to really mess up an Armored enemy if you get close.  It is just Range 1, but it's also Impact 1 (per trooper using the grenade) so you can cause some considerable damage with this bad boy.  Because of the Black die on the weapon and your Stormtroopers native offensive surges, just having this upgrade on your troopers turn them into powerhouses at Range 1.  Also Note: it is it's own weapon, so with this, a Heavy Weapon trooper, and the generic weapon, your squad could make 3 different attack pools on 3 different targets (at the appropriate ranges).  Spread the suppression love around!

Concussion Grenades - 5 points - Blast ignores cover, making this the anti-infantry alternative to Impact Grenades.  Note: Blast is added to the pool just by using this weapon, so you can have the rest of your troopers chuck the grenades while you combine it with your DLT-19 without worrying about gimping the Red dice.

That's it.  Just 4 minis.  Sometimes you just need some warm bodies to hold an objective.

5 Minis, built to rush a target and push an enemy off of cover.  Combine with Vader and New Ways to Motivate Them to have them hustle forward twice and chuck their grenades.

My gaming buddy Chris loves spamming this specific unit.  It's a jack of all trades that just got better with Veers handing out aim tokens like candy.  There is nothing worse than watching 4 of these guys plink away at a AT-RT or Corps unit.  There's nothing they can't threaten, and while they won't do anything GREAT they'll do a pretty good job at most things.

Expensive for a Corps unit, yes.  But this unit solves the Range 1 donut hole with Impact Grenades, and will absolutely shred anything with Armor, taking out AT-RTs at long range, harrassing AT-STs and Airspeeders, and just generally being a giant nuisance from the backfield, and a huge hazard up close.  Your opponent will make that mistake exactly once, and after that will treat any HH-12 Stormtrooper unit with a wide berth with their Armor units until they can verify the upgrade cards on it. 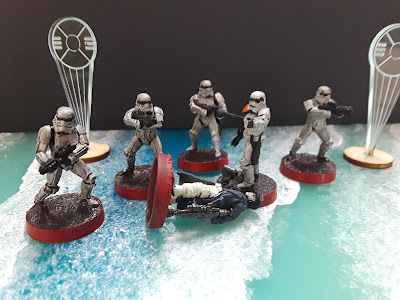 Like most Imperial units, I don't have any of my own to paint, so I can't give the best advice on this.  I do know that white paint is notoriously difficult to get right, so be careful how you water it down and don't be afraid to make multiple layers to get it right.

There is some debate on if you base the troopers black and paint them white, or if you base them white and fill in the black spots.  As long as it looks good, do what is easier for you.  Here's a good resource for film accurate armor styles.
Incoming Transmission From: Biggs at 08:00
Email ThisBlogThis!Share to TwitterShare to FacebookShare to Pinterest
Labels: Corps Unit, Imperials, List Building, Star Wars Legion, Stormtroopers