It happened.  We had the casual play event "Saturday at Scarif" at Drawbridge games, which included a "Grand Army" size battle.  Played on Jake's custom Scarif board, it would be me and Sean as a two headed monster for Rebels, with Luke as our only commander (being the only one we could legally take) while Jake and Kasey ran the Imperials with Vader and Veers.

Special thanks to Rebel Light Works who sent the custom objective tokens to Jake to play on the board.  I hope you can see them well in the pictures provided.

Exact upgrades are unavailable at this time, but the following units were on the board:


We wanted to play on Jake's custom Scarif map (this was kinda the point of the event), so doing a 6x4 wasn't in the cards.  So in the interest of fun we broke out the new Silent Hail Game 4 setup. 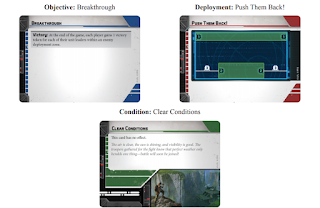 Imperials would be the side with the "3 in, 2 up" deployment zone, on the "good" side of the map, while the Rebels invaded from the sea, "1 up" on the long deployment. 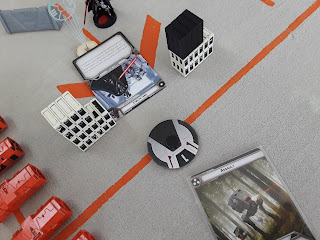 Jake, who brought Vader (specifically a Vader painted by the son of the shop owner) declared that Vader was going to swim in the ocean or die trying.

Luke decided an Assault was in order, assigning tokens to the one Airspeeder that decided to take Comms, and 2 of the AT-RTs.  Much of the first round were units moving up into cover, as there were a ton of barricades available to for either side to hide behind.  Vader chucked his light saber at a few rebel troopers, twice, but found that he had pushed too forward too quickly, and most any Rebel unit within Range 3 of his hiding spot decided to focus fire on bringing him down.

Meanwhile, the Speederbikes on the Imperial Left flank pushed into the open water, where they were very quickly dispatched by the rebel T-47s and Troopers.  The Imperials had over-extended and they were going to pay for it.  However, they managed to put some heavy damage on Rebel troopers in the center, hitting multiple targets with their AT-STs and troopers supported by Veers Aim tokens. 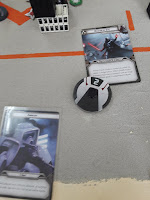 Vader activated Master of Evil to give himself a dodge token, as he was very near death, and in range of several rebel trooper units.  The Rebels decided their best bet was to try and Ambush Vader to knock him off the board, electing "Smiles" the AT-RT to deal with him. 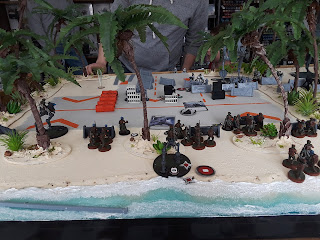 Smiles would activate first, and between aim, 5 black dice, and surges to criticals, wound up putting 4 critical results onto a 1 health Vader.  Heavy cover and a Dodge couldn't reduce more than 1 hit result, and his defense die rolls weren't hot enough.  "Smiles" wouldn't live through the round, but the damage was done. 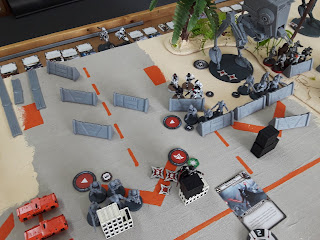 However, even with Vader dead, there were a lot of troopers overloading the Right side of the Imperial flank, and "Smiles" wasn't the only casualty as the Imperials decimated Orange "Duro" Squad, wiping out all but the leader.

In the center, troopers hunkered under cover, and exchanged blaster fire.  Ion Troopers fired at the AT-STs, but Veers was able to give them aim tokens to compensate.  Heavy Cover meant that the expected trooper push up the middle wasn't happening.  Things would be decided later, or on the flanks. 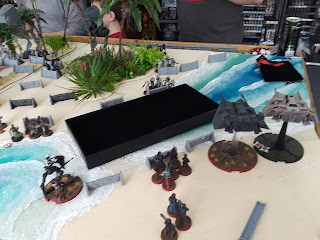 The Right flank by comparison was going quite well for the Rebels, as the two Airspeeders advanced to punch through the Imperial flank there.  Only 3 Trooper squads unsupported by commanders stood in their way.  The Trooper units on that side also began a slow advance.

The Imperials fired back, pushing up with the lead Trooper unit and focusing down on one of the Airspeeders.

But the Leader Airspeeder (with the ground buzzer) was already through and aiming at the AT-ST with Weiss onboard.  This shot was not enough though, as the Rocket team that the Airspeeder had ignored to tag Weiss opened up and blew it out of the sky. 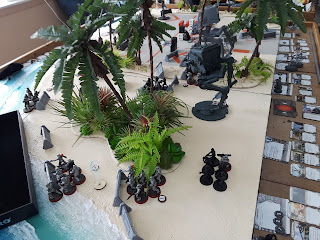 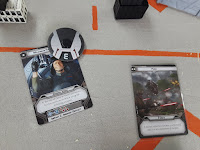 This seemed a good time as any for the Rebels to Push forward, while Veers, desperate to keep the empire going, ordered Maximum Firepower!

The Rebel Center was stalled as long as those AT-STs were there to provide covering fire for the Empire, so they would definitely have to go, while the Imperials had to contend with the Airspeeder on their Left, and an AT-RT pushing up their right with only trooper support. 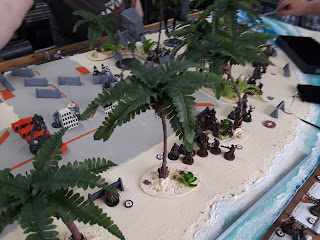 But the Rebels did have the Airspeeder which had pushed up the Right side, which hit the Weiss AT-ST and hard, and one of the DLT Stormtrooper squads watched in horror as a large harpoon flew out of the back the Airspeeder, impaled a squad mate, and yanked him along behind the Airspeeder, dragging him through the sand and the underbrush.  But the AT-ST's armor held - it would take more than just the first activation to bring it down.

Veers targeted Luke with his maximum firepower, but Luke was behind heavy cover, and thus wasn't really worried, taking a single hit. 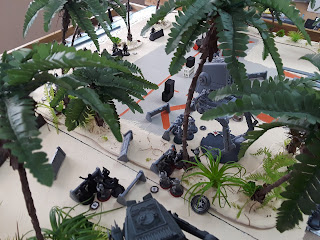 The rest of the center would continue to stagnate, with little movement.  Though a late Ion cannon would finally take out the AT-ST with Weiss.  Meanwhile, action continued aplenty on the flanks. 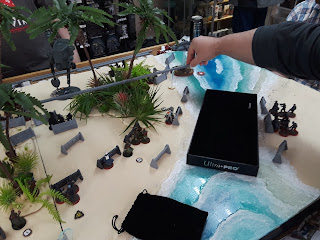 As battle on that side was winding down, it also became the default place for us to roll our dice.

The other side was likely not going well for the Empire.  While they had wiped out most of the Rebel's left flank, they had lost Vader the previous turn, and neglected to issue any orders there, allowing Red Squad and the AT-RT to push forward.  Red Squad pushed forward too quickly, getting nearly wiped out by focus fire, but the AT-RT was able to charge into the nearest Stormtrooper and begin rolling up that flank. 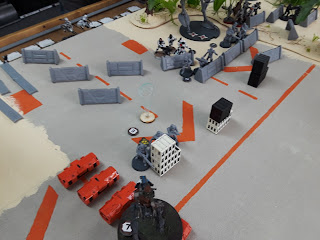 Now there was a large space without Imperials in it for the Rebels to advance... but no Rebels on that side to really take advantage of the breakthrough.  Just "Blue Shield" the AT-RT, and Orange "Duro" Squad's sole surviving member.

There was one final consideration though - the Rebels at this point out activated the Imperials, and one of the orders had been given to Luke.  He activated last, jumped over his barricade, and charged the center of the Imperial lines. 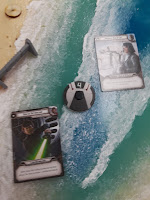 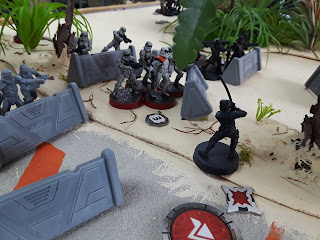 Luke was the Son of Skywalker after all, and the hero of the Rebellion, and he was going to crack the middle of the line, no matter what.  Veers was expecting to take a moment to reload his rocket launchers to fire on the AT-RT and the Airspeeder, and was momentarily caught offguard.

Luke was going to charge into the center line and carve up whatever he ran into, and that is what he did, targeting the rocket squad on the far left of the Imperial center, which he was just out of a single move from.  Instead he activated Force Reflexes and Mind Tricked the 6 man trooper squad right next to him, then Jumped into the fray with the Imperial troopers, wiping them out in two swings. 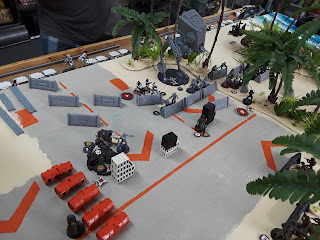 This was a bit too good, because now he was out of melee with anyone, and there were a LOT of angry Imperials looking at him.

"Blue Shield" continued to push up the left flank, finishing off the Imperial troopers near him, but being taken to near death by the counter fire.  He was disabled, and hung on by a single point of health.  Duro squad snuck up along the fuel tanks, hoping to sneak in and score the breakthrough. 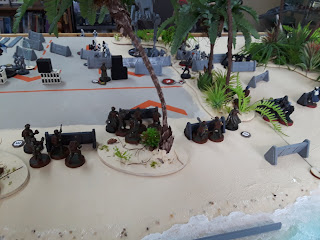 With the Center down to just one AT-RT and Luke taking most of the fire, the other troopers were able to consider moving forward to push on the objective.

The Imperial position was in disarray, and their best bet was to sell their position as dearly as they could. 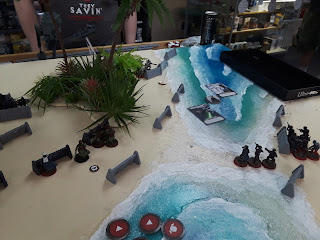 Meanwhile on the right flank, the Airspeeder realized that he didn't have to shoot the AT-ST in front of him, as Veers was... right there, and had run back from his troopers on a previous turn to get into range of Luke with his Maximum Firepower.  Suddenly, Veers was defending against a lot of Airspeeder dice, and hung on at just 2 health.  Also the right flank, the Troopers advanced as quickly as they could, rushing across the land bridge to try and get back into the fight.

The Troopers on the Imperial left had just seen a second trooper vanish, dragged behind the Airspeeder, and were beginning to take Z-6 fire, and panicked, running for the board edge. 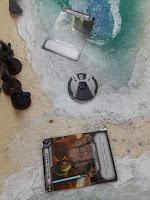 Whoops, forgot to take photos of Round 5, except for a few cool moments.  Luke gave orders to himself and a nearby buddy, and pushed after Veers, cutting him down, but was on his last legs.  He had taken quite a few shots by now, winding up out of melee and in shooting range of many things.  However, he was saved by a new Hero of the Rebellion: 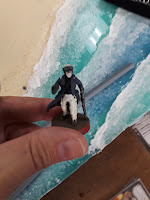 Sgt. Pail had seen his entire squad get wiped out, but gritted his teeth when he saw Luke rush forward, only to see him disappear in a hailstorm of blaster fire at the end of Round 4.  A full squad of Stormtroopers, untouched the entire game, had him dead in their sights.  No cover, and a lot of angry black dice with surges with their grenades. 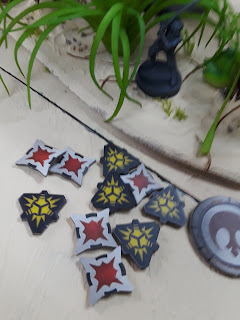 Luke had one chance, and with no regards for his own safety, Sgt. Pail charged the Imperial positions, engaging the Stormtroopers in fierce melee combat at the cost of his own life.  It was because of his heroic sacrifice that Commander Skywalker was able to survive the engagement, and recommend him, posthumously, for the highest Rebel honor.

Luke himself was not thinking of this at the time, just of his own survival.

5 damage and 5 suppression tokens by the end of Round 5.  But Veers was dead, the AT-ST was dead, and there wasn't a lot going for the Empire at this point. 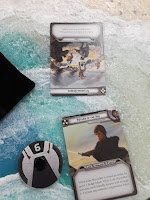 The Empire had no command cards not dedicated to their two dead commanders, and were forced to take a standing order. 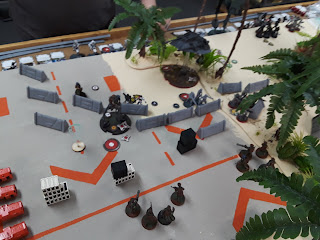 The Airspeeder was still doing strafing runs on the Imperial positions. 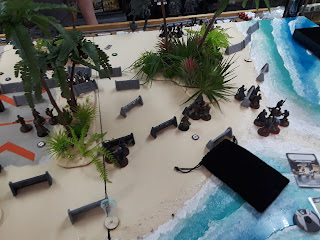 The Imperial Left flank had collectively panicked, and the Rocket squad just ran away in terror out of combat entirely.  Meanwhile, Rebel troopers pushed up into the Imperial deployment zone. 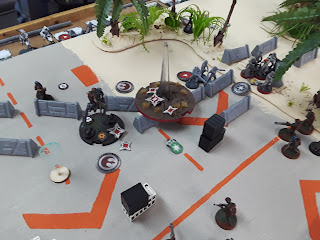 It was over, the only question was how many more Imperial lives would be spent before it was finished.  The new Imperial Commander, SC-1003, chose to surrender rather than waste any more. 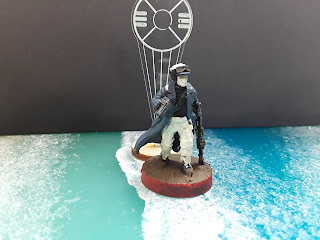 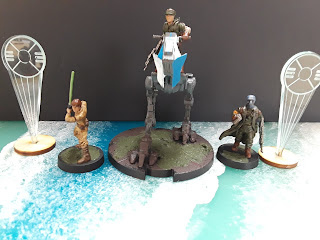 Luke Skywalker - Medal of Bravery - charging the Imperial positions single handedly, and taking out both an entire Imperial squad and General Veers himself. 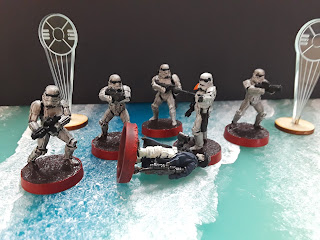 CS-1003 - Omega Squad - Medal of Bravery - A controversial decision, but as the only intact squad not to flee from battle, Omega squad also had the highest ranking NCO left alive, who put in for medals for his squad upon escape from a Rebel POW camp.

"Upholding the best of Imperial traditions" 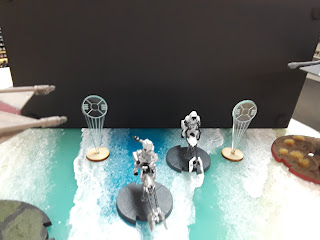 Don't drive your speederbikes in front of your front lines if you want them to still be there the next turn.
Incoming Transmission From: Biggs at 07:16
Email ThisBlogThis!Share to TwitterShare to FacebookShare to Pinterest
Labels: After Action Report, Darth Vader, General Veers, Grand Army, Luke Skywalker