A reminder that this article is brought to you mostly by accident, thanks to the folks at the Legion Discord Server.  They had a Veers up for grabs, and I won him out of the 198 people that entered.  So, rather than do Speeder Bikes or the AT-ST next, we're going to skip around a bit and hit a Wave 1 release!

I've been at Star Wars: Armada's Worlds - in case you missed my non-Legion articles - so I haven't had time to paint him yet.  You'll have to check out my buddy Kasey's Veers instead.

Oh, yeah, and this is our 401st article unless Truthiness sniped me and I was going to write something about community and thanks and such but noooooooo Shmitty had to go and post about Gen Con.  So screw it, I'm gonna write about Veers. 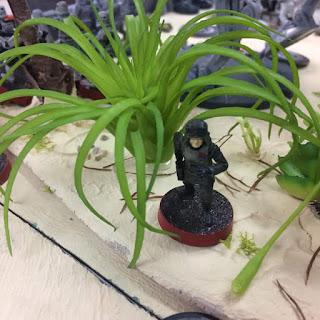 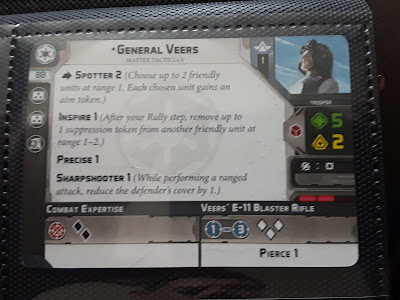 Veers isn't Vader.  I mean, that goes without saying.  He's not the powerhouse that Vader provides.  But he is 120 points of savings over the big dark guy, and that alone is worth looking at him as a sole commander for your troops.

He also by merely existing gives you the option of going double commander, which we will look at in more detail in a bit.

Veers is by far the weakest defensive commander available at this time.  5 health and a Red defense die looks pretty robust, but that's actually only as good as a 5 man Stormtrooper squad.  He has no defensive surges and no way to gain any.  Only 2 courage means he and his forces are susceptible to panic if you can focus fire on them, but that's still better than them going without a Commander.  He does have Inspire 1 though, which can help get a key unit moving if they are pinned down, or recover them if they are panicking.  Interestingly though, as he is not immune to suppression like Vader is, he can take advantage of the +1 Cover that having any suppression tokens grants.

Offensively, he packs an interesting punch.  His E-11 is similar to the weapons Imperial Stormtroopers carry, and uses the same white dice, but he fires more - 3 dice total.  In addition to that, he has Surge to Critical for his attacks, which give him 25% chance of hitting a critical, and an additional 12.5% of getting a hit.  Much like Stormtroopers, his attack is much better if you can give him an aim token.  Interestingly enough, he is good at giving out Aim tokens, with Spotter 2 as an action - he can give out 2 aim tokens to units nearby, including himself (as he is friendly to himself and is at range 1 of himself).  Once he is aiming, he has Precise 1 giving him up to 3 rerolls on his 3 dice attack.  You're looking at an average of 1.125 damage per attack without Aim, and 1.828 with.

He also packs Sharpshooter 1 for getting rid of some of his opponent's cover and Pierce 1 if his blaster hits, letting him put some damage onto the enemy.  Bear in mind he is more likely to be rolling Critical Results than anything else, so while Sharpshooter 1 will rarely be useful when shooting into heavy cover, it is great for letting him pile onto enemies caught in the open, or shooting at non-suppressed troopers in light cover.  So if you do roll that damage, chances are he's going to put it onto the target.

He's much worse in melee combat, only rolling 2 dice, and without Pierce added.  1.25 is his average there without any rerolls, but without Pierce his opponents will get their chance to avoid the damage.

For movement, he sports a Speed 2, which lets him keep pace with his Stormtroopers, and hustle to objectives faster than Vader's slow march.

Veers comes with 2 possible Command upgrades and 1 Equipment upgrade.  These can be used to increase his effectiveness in various ways:  * - denotes that it comes with the unit expansion.

Kind of interesting that Vader can't equip a card with him on the card face.  But he's got battle meditation which you might argue is more versatile.  Commanding Presence lets Veers issue commands out to Range 4, which is a considerable portion of the battlefield, especially if he is commanding from the middle of it.  Of you can leave him off to one side, and still have a good portion covered by his command range.  While it doesn't improve the range for his courage, it does let him chuck orders at things like Speeder Bikes that have gotten a bit too far forward.  Note that unlike Battle Meditation, you can't issue orders to any unit you want, it has to be an eligible unit.

If you were worried how you were supposed to keep Veers alive when he's got the health of a not-quite-full Stormtrooper platoon, this is how.  Give him a bodyguard unit (or two) of Stormtroopers and let them eat any attacks that come his way.  IMPORTANT NOTE:  This takes place during the "Modify Attack Dice" step of an attack - or the 6th step.  Notably this is the Defender modifiying attack dice, and the Attacker gets to modify theirs first.  Did you know Impact dice change happens regardless of whether Armor is on the defender?  [BIGGS EDIT:  It in fact does not do so, per designer email.  Default to the card text.]  So, Impact will keep you from having hit results, to chuck to your nearby troopers, as will natural critical hits.

Wasted points on Veers.  He can only reroll 3 dice maximum, and he's already doing that with his innate Precise 1.  I guess you could reroll all 4 dice with Maximum Firepower, (more on this later) but with Red dice you'd better hit on at least 1 of those.

Expert Climber isn't anything to write home about, unless you're utilizing a lot of custom terrain.  Leave this upgrade at home if you're playing on a featureless plane, but consider it if you aren't sure what you'll be seeing, or you're expecting to climb into a lot of high ground. 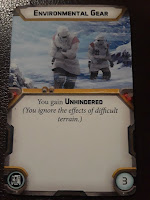 Unhindererd is actually really cool, and something you're going to want to put on Veers, and maybe your Stormtroopers as well.  Moving Speed 2 through difficult terrain is great, and as long as barricades exist, there will be difficult terrain.  Especially good for a Commander like Veers, as you'll want to be completely behind a baracade instead of leading from the front like your Trooper Commanders.  Ammusingly enough, this might go best on  Luke Skywalker to let his double move at Speed 2 directly at a target for his Charge attack. 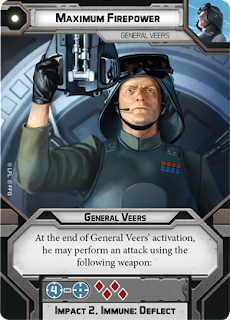 
Aside from being the only reason to potentially take Targeting Scopes (and even then, it would only be needed 0.02% of the time...)

Maximum Firepower is Veer's 1 pip, and unlike Vader's 1 pip, there are no sneaky upgrade cards like Battle Meditation that let you toss the order onto something other than your commander, so it's truly restrictive over Ambush if you're running double commanders.  You can utilize it as part of a Turn 1 strategy to put long range firepower down onto a target, assuming Limited Visibility isn't in play.  The biggest restriction to using it is the Range 4+ on the attack, so you'll need to position Veers in such a way that he has Line of Sight to something on the other side of the map.

In terms of damage, the attack is going to be very respectable.  It lacks the Pierce 1 of Veers' normal attack, but it does benefit from his Sharpshooter 1 as well as his surge conversion and the Impact 2 and Immune: Deflect on the card itself, making it great for lighting up Airspeeders, Snowspeeders, AT-RTs, AT-STs, or Laser Sword wielding Commanders.  Special note should be made that Immune: Deflect prevents the player from even using the Deflect skill on the attack, not just the special surge rules, so Luke / Vader won't be able to even activate their defensive surge conversion.

The attack itself will deal pretty close to 4 damage before defense dice, and will almost guarantee it with an aim token on Veers.

If running Veers and Darth Vader together, is this worth taking over Implacable or Ambush?

I think Implacable is going to be the must include in that situation, as you are going to want to maximize your Vader activations if you are running him.  This may be the one you want to leave out.  Ambush isn't adding any damage, but it can be used by any commander and the order assigned to any unit, and Implacable has the potential for Vader to do upwards of 6 damage with a second attack, with Pierce, so you've got a much larger impact with that card.  So you're sacrificing flexibility for impact. 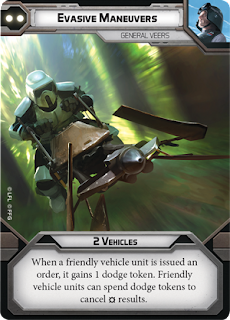 I think this might actually be the weakest of Veers' cards.  You are committed to activating Vehicles only, so it limits how you're planning on building his list out such that it will need to include 2 vehicles, and while you're giving two of them a dodge token and allowing any vehicle to spend dodge tokens to cancel Critical results, it's not adding anything offensively.  Probably the best use of this is to give an order to a vehicle, have that vehicle also dodge as an action, and be able to more or less cancel a high critical attack such as an AT-RT sniper shot or a small fire supported Ion shot.

This gets better the more your vehicles have Armor, so practically required for a double AT-ST list.  Still, it isn't horrible for Speederbike Cavalry the turn after you commit them to an attack.

If taking Veers and Vader, you're not going to have a lot of points left for vehicles, and might in fact be going Trooper heavy with Vader as your heavy hitter.  Leaving this behind for Push is probably your best bet. 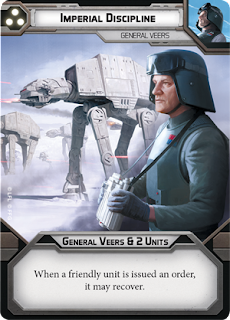 This is probably the best card Veers has.  Let's look at all the things that benefit from a Recover action right now:

- Panicking or over-suppressed troopers (including Veers himself)
- Force Power Maximized Vader (Refresh all the powers the turn after you burn them all)
- Weiss on an AT-ST.
- HH-12 Stormtroopers and Ion Snowtroopers

Because you can refresh Sith Master Vader (Force Choke, Force Reflex, Force Push) I'd put this one as a must include on any joint Veers / Vader list, and a great late game drop.

Haven't had the chance to put paint on mine yet, so I'll update this section when I actually get to it.
Incoming Transmission From: Biggs at 05:48
Email ThisBlogThis!Share to TwitterShare to FacebookShare to Pinterest
Labels: General Veers, Ground Commander's Guide, List Building, Star Wars Legion, Strategy, Tactics