Let's get caught up on the Wave 0 units.  We'll get to the AT-ST next, but today we'll discuss the 74-Z Speeder Bikes, known from now on as "Speeder Bikes" or "Bikes".  Then we can actually start talking about the Wave 1 releases not named Veers! 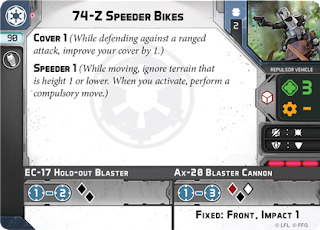 The Speeder Bikes are the first Imperial vehicle you'll have access to out of the starter set.  The general consensus at this time is that the Speeder Bikes are very good, especially as Speeder Bike Cavalry, hitting enemy positions off of a flank.  So far, this seems to be an accurate way of describing how you should be using them.

The Speeder Bike unit starts off with 6 health spread over 2 minis.  The good news is that unlike any other vehicle in the game so far, it is immune to being damaged.  The bad is this means that unless you have weird LOS problems, 3 net damage is going to remove 1 mini, and with it half your strength from the board.  Fortunately for the Bikes, they have defensive surges to back up their white defense die, as well as Cover 1.  This doesn't mean that they aren't going to explode if caught in the open, unsupported, so make sure you consider your options before driving them straight at a target on the first turn of the game.

If that defensive ability feels like glass, here comes the cannon.  Offensively they are a beast.  The Bikes sport an offensive surge to a hit, as well as the Ax-20 Blaster Cannon from their front arc, which brings their damage to a respectable 1.875 average per bike from Range 1-3.  With 2 in a unit, you're regularly putting out 3.75 average without taking into account Aim tokens and rerolls.  The Ax-20 also has Impact 1, which with two bikes gives them a respectable Impact 2 for shredding AT-RTs and Airspeeders left exposed.  They can even do good work against an AT-ST if they show up in a pack!

That isn't all that Speeder Bikes can do though.  If pointing right at a target is recipe for disaster, then you can always just shoot your targets with your EC-17 Holdout Blasters, which are 2 Black dice each with offensive surges to hits, giving an average of 1.25 damage per Bike, and a pretty good chance to at least put suppression on a target with a single bike (~85%) at Range 1-2.  Don't forget, as they are different weapons and you have 2 units in your list, if it makes sense to do so you can split your fire between two different targets with your weapons.

As far as maneuverability, they are the fastest thing in the Imperial arsenal at this time.  Speed 3 alone means they can zip around the battlefield (though I haven't measured yet to see if the huge size of the AT-ST base means that at Speed 2 it is faster), but with Speeder 1 you get to ignore terrain at Height 1 or lower and make a compulsory Speed 3 maneuver at the start of your activation.  This is frequently more of a benefit than a detriment, as you can change your position and not waste your actions on moving.  Although you certainly can compulsory move and then double move if you really need to.

And with all those interesting abilities, you can almost excuse the fact that they have essentially no upgrade choices.

There's 2 at the moment!

If you thought the Speeder Bikes were annoying, keeping your opponent from activating key units at key times makes them even more of a priority target, if your opponent can hit them in the first place!

Honestly, 15 points feels like a lot of points to put on a fragile unit like Speeder Bikes, but when it triggers it really, really hurts.  Just imagine an opponent forced to shuffle a key token back into their bag with a giant stack of Corps units, or denying a Trooper a crucial Dodge Token from "My Ally Is the Force".

Not a bad decision to take this, especially if your plan is 2-3 units of Speeder Bike Cavalry.  This way no matter where on the board they are, your Push / Evasive Maneuvers / Assault will be able to put tokens where you need them to be.

That's all the upgrades.

Do you even want me to try to build them out for you?

The real question is how many and what do you put on them?  I think 2 is a good number, as they can be commanded with Push / Assault / Evasive Maneuvers / the other 3 Pip Commander Cards, giving you 3-4 turns of pulling every support from your token pile.  That being said, 3 is kinda a magic number too, as it is the number of Speeder Bikes that are almost certain to Ace an AT-RT off the board if they can all point at the same one.  If you do go 3, then maybe consider Assault as a 3 Pip even if you are running dual Imperials.

Again, I haven't painted them, so I am basing this on what my friend Chris tells me.  Paint the trooper the way you are painting the rest of your troopers.  You can do a brown for the seat and handlebars, and a grey for the rest.  I dunno, use your imagination.