Ruined AT-AT Terrain for Legion (from a popcorn bucket)


Aside from painting the models, one of the fun hobby aspects of Legion is creating cool, Star Wars themed terrain.  There are some excellent start-ups on the internet creating 3-D printed terrain pieces that I am hoping to grab eventually.  But, in looking around the internet for Legion terrain options I came across people talking about an AT-AT Popcorn Bucket that they sell at Disneyland that looked like it would make an interesting option.  Conveniently enough my in-laws were making a trip there this spring and I was able to have them bring me back one.


I actually have a Nemo popcorn bucket that my wife and I picked up in Tokyo Disney last summer and it was really pretty nice, with articulated eyes, but the AT-AT just blows it away.  It is a really nice size and has fully articulated legs.  For $25 it is an excellent buy.  (Apparently they are popular enough that they limit purchases to one per day.)


I don't have it anymore, but size wise it is comparable to the old WotC AT-AT.  The WotC AT-AT has better detail, but this one wins out with the movable legs.  It is too small to really be in scale with the AT-ST, but I know some players out there are developing rules to use it in Legion games.  For me though I wanted it as a terrain source.

It actually came apart really easily with screws holding it together at a couple of key points.  The legs had to be snapped off, but no damage was done in the process.

My feeling based on experience with other games was that I would get a lot more use out of several smaller pieces of terrain than 1 giant wrecked AT-AT.

I picked up some press board at Home Depot and cut out irregular pieces to fit the AT-AT chunks to.  I used my Dremel to both smooth the pieces of press board and trim some bits of the AT-AT so they would lay flatter.  It also made a nice weight to hold down the body while the glue dried.

Uh yeah, I glued the pieces to the wood. 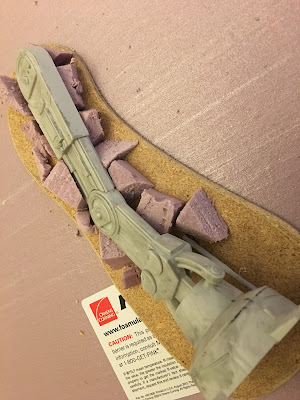 Flat boards are dull, so I also picked up a small piece of insulating foam.  I cut out chunks of the foam to use as rocks.  I stuck the rocks in and around the pieces of the AT-AT.

I then hit the whole thing with a coat of Army Painter grey primer.

From there, the rocks were dry brushed with a medium grey and coated with Army Painter dip.  The dip will help harden them as foam terrain is notorious for chipping.  I dry brushed a light grey over the AT-AT unevenly to give it a bit of a weathered effect.  The base was painted olive green and then coated with Woodland Scenics Blended Turf.  After that some Army Painter Brown Battleground was added for accent.

I tried both green and dead static grass as well, but wasn't thrilled with how it looked.

I ended up with 5 very nice, but also very playable pieces of Legion terrain.  It probably would look better as one big wreck, but that wouldn't be as nice or customizable to play with.  These pieces ae big enough to block LOS which is really nice and can fit in on most any table.

So, go get yourself a popcorn holder.  It makes great terrain.

Incoming Transmission From: shmitty at 20:04
Email ThisBlogThis!Share to TwitterShare to FacebookShare to Pinterest
Labels: Legion, Terrain