What follows is a joint Armada / Legion Operation, for 4 players.  Over 3 games, you will play out a narrative as Imperial forces try to wipe out a Rebel base on Tralus, and the Rebels desperately try to save their personnel and escape with information vital to the Rebellion.

This will be an escalation mission where the forces will grow in size over multiple rounds.  It is going to be designed to prevent snowballing, and be interesting and dramatic from the start to the finish.  That being said, each game is going to be important to the narrative of the game. 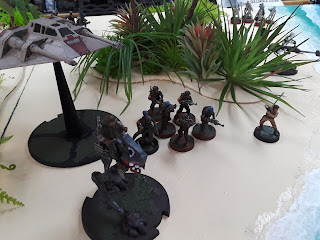 For this Operation, you'll need 2 6x3 play spaces, one that will be the fleet battle and the other that will be for the ground combat.  Players will divide into two teams, one Imperial and one Rebel.  Each team will then decide which player is the General and which is the Admiral.

Neither game should advance the turn counter until both games are finished with the current turn.  While this rule isn't important in Mission 1, it will become important in future missions. 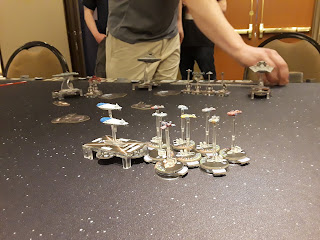 Read the following to the General:  "The Empire has found your base on Tralus, and their attack is imminent.  You've managed to call for reinforcements, but it is unknown if they will arrive in time.  You have to buy them as much time as you can if you're going to live through this to strike back at the Empire another day."

Read the following to the Admiral:  "The Empire has found our base on Tralus, and the personnel there are counting on us to save them.  We've received reports that the Empire isn't expecting us to show up in numbers, so we should be able to punch through their blockade, reinforce, and rescue our troops on the surface!"

The Admiral must construct a 400 point list with the following restrictions:
No unique cards that share a name with cards the General has selected.
3 GR-75 Medium Transports or GR-75 Combat Refits
4 of the following squadrons:  YT-1300s, YT-2400s, VCX-100s, or HWK290s  (Note, you can use named squadrons)

Read the following to the General:  "You have them.  The Rebel base is in sight, and they have barely mustered a defense.  Push them aside, so that we can begin an assault on the base proper.  None will escape the might of the Empire."

Read the following to the Admiral:  "Sir!  Rebel ships coming out of hyperspace!  We're still set up for bombardment and to stop Rebels from escaping!  What are your orders?"

The Admiral must construct a 400 point list with the following restrictions:
No unique cards that share a name with the cards the General has selected.
1 or more Large base ships.

Special Rules:  The Empire is the Blue Player.  The following Battle Cards are considered to be in effect:

Setup:  The Rebel Player is the First Player.  The 3' edges of the play area become the player edges. Each player's deployment zone is within 2 range ruler lengths of his edge. The second player places all obstacles. Obstacles must be placed beyond 2 range ruler lengths of both player edges, and beyond distance 1 of other obstacles.  The Second Player then places 4 objective tokens at distance 3 from each player's deployment zone, and distance 5 from the neutral edges.  This is the Ambush Zone.

Special Rules:  A flotilla may not activate until after all other ships have activated.  If only flotillas remain for a player to activate and the opponent has at least one non-flotilla ships remaining, the player must pass.  A ship equipped with Gov. Price ignores this restriction.

Record the following information:
- Winner / Loser of Space Match
- Winner / Loser of the Ground Match
- Number of Victory Tokens gained by Rebel Space Combat, and which Rebel Ships / Squadrons earned them.
- Eliminated unique characters, and location they were eliminated in.
- Surviving Ships / Unique Squadrons.
- Ground Units not Damaged and retaining half their minis or more.

If the Rebels won the Space Battle, read the following to the Rebels:  "We've resupplied the ground forces, and driven off the Imperial blockade.  It's only a matter of time before they are back, and in greater numbers, and we will need to be ready.  In the meantime though, space is ours!  Begin the evacuation."

If the Rebels won the Space Battle, read the following to the Imperials:  "We were caught out of position, but the might of the Empire is not so easily defeated.  We have already called for reinforcements, and they will destroy the Rebel fleet, ship to ship."

Rebels will be Second Player for Mission 2 (Link to follow)

If the Imperials won the Space Battle, read the following to the Imperials: "The Rebels have been driven off, cowering before the might of our navy.  Any forces they managed to land will be swiftly dealt with.  No doubt more will come, but we will drive those away as well.  Prepare for bombardment of the Rebel base."

If the Imperials won the Space Battle, read the following to the Rebels:  "The Empire has crippled our rescue effort, but we cannot lose hope.  We just received word that more forces are in route, which we can use to break the blockade!"

If the Rebels won the Ground Battle, read the following to the Rebels:  "We've driven off their scouts, but there are more Imperials on their way.  Still, this is big.  We can hold them here, and we have more forces ready to join the fight while we fuel up the transports for evacuation."

If the Rebels won the Ground Battle, read the following to the Imperials:  "A disappointing setback for certain.  The Rebels are tenacious.  But we will break them."

You will play Ground Mission 2a (Link to follow)

If the Imperials won the Ground Battle, read the following to the Imperials:  "We've pushed through their front lines.  One of the prisoners we took revealed that the Rebels have hidden an Ion Cannon away to cover their escape, but it isn't on line yet.  Onward!  We'll need to eliminate the Ion Cannon before it can get online."

If the Imperials won the Ground Battle, read the following to the Rebels:  "They've broken through, and are headed right for the Ion Cannon!  We have to rally and stop them before they destroy our cover for the evacuation."

You will play Ground Mission 2b (Link to follow)