I've finally settled on what I'm going to run at worlds, and the answer is that I HAVE AN IDEA! 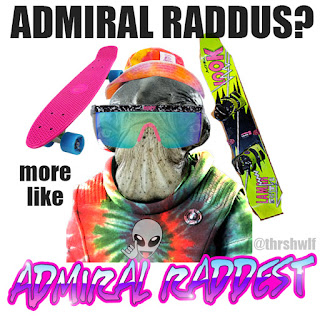 
First off, thank you to Truthiness for refining my crazy Raddus ideas.  This was originally going to be CRAMBO central with a Mon Karren drop.  If I don't do well, I'm going to be saying "CRAMBOs would have won" and blaming him.

The only way to win the deployment fight is to be Raddus, and I just need to win that deployment fight.  With that in mind, I have put together a list comprised primarily of the things that worked well for me in the past, and things I have seen work well for others.

Initially I had a super low bid. 378 is about as low as I can think to go and still feel comfortable that I've gotten everything into the list that I want.  I wanted that bid for two reasons:  Reason 1 - Krit-Kuats, MC30s, Clonisher builds and Pryce are going to WANT so desperately to be able to first/last.  They are going to need to go first/last.  I don't want them to do this.  Reason 2 - In a mirror match, the advantage goes to the Second Player's Raddus, so I want to be able to win the mirror match and get the second Raddus drop. After watching through day 1A and talking with Truthiness, I went with a lower bid and picked up the ETs on all the CR90s. I think I'll still have the choice more often than not... That being said, after seeing the "high bids" from Day 1a, I punted to having "only" a 10 point bid.  I couldn't justify going all the way up to 25 (or more) so better to go 10 and get the bid against people who don't care and win with 2nd player against people committed to the bid.

Prior to the Raddus drop, I have 3 combat ships with good long-range shooting ability and Speed 4.  I can use them to set up good position for the Raddus drop.  And what can I say about TRC-90s that haven't been said already.  The GR-75 and squadrons are there to act as speed bumps against any squadron heavy list, or to get the Raddus drop in play against anything that doesn't have a good accuracy generator.

Finally, the drop ship.  In addition to the title, Mon Karren sports Heavy Ion Emplacements for drilling through my opponents shields.  Combined with the title, my opponent can Redirect (to already reduced shields), Brace, or Contain (if the have Damage Control Officer).  But not all at once.  Caitken and Shollan help ensure that I get the critical result, and maximize my damage roll.  Engine Techs lets me hunt other things once my initial drop is finished, or just ram something that needs that little bit more to finish off.

Truthi's notes: I'm really excited to see how Biggs does with this. As you can plainly see, Biggs and I came together on this quite a bit. My own Raddus list is nearly identical at this point. While the TRC90s with ETs came from me, I think Biggs has really brought it home with the HIE Mon Karren. The synergy between HIE and TRCs is exactly what the list needed. I've long felt the Lib is the best ship for a Raddus drop because of its range and flexibility. It doesn't need a double arc and it doesn't need to trap a ship at close range, giving Biggs an edge over other Raddus lists.