Here's an "easy" Armada article.  There's only one Neutral Officer in Wave 7! 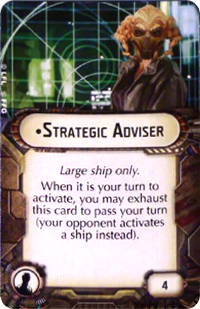 When it is your turn to activate, you may exhaust this card to pass your turn (your opponent activates a ship instead).

Guess who's stock just rose thanks to the flotilla nerf?  Strategic Adviser is the cheapest way to delay your activations, and now with only 2 Flotilla allowed per list, it is going to be an even more crucial officer card for large base lists that need multiple activations to work.  Especially any Rebel lists that want to be last, as they don't have Pryce to give them an automatic final activation.

Speaking of Raddus, and Pryce, how does Strategic Adviser work within the context of other activation cards?

Expect this card to see a lot more table time with flotillas being limited to two per list.  Gotta pad those activations somehow, and 5 is still the magic number.