Oh, look at all these new officers!  There's quite a few in the SSD expansion, so let's dive right on in. 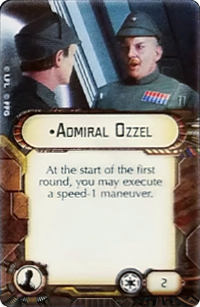 
At the start of the first round, you may execute a speed-1 maneuver.

Ozzel always did want to get up close in a hurry.  This is a relatively cheap card that you can either use to get some early game repositioning, or get a ship in range to go "spotter hunting" against an enemy's Raddus.

About the only real trick you can play with it is with Fighter Coordination Team.  Because Ozzel gives you a maneuver, you can use FCT to reposition your squadrons, then do it again during your regular movement.  The best ship you can pull this trick with is the upcoming Harrow title for the VSD.


That's the threat range for a double turn 1 movement for Harrow.  That's the dreaded MMJ (Maarek / Morna / Jendon) almost into your deployment zone on Turn 1, provided you have another squadron activation lined up to actually move them.  Alternatively, do it with all Rogues, and add Expanded Hangers on the Harrow.  Morna / Firespray / Firespray / Firespray for 9 Blue dice! 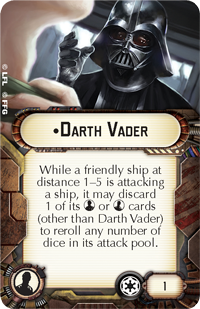 
While a friendly ship at distance 1-5 is attacking a ship, it may discard 1 of its (Commander) or (Officer) cards (other than Darth Vader) to reroll any number of dice in its attack pool.

A card for the discerning SSD player.  Why waste time with rerolls and dice modification upgrades anywhere else when you can park Vader on the Comms Net or Repair Team Gozanti already following your big boy to choke out your officers when you need a big hit or they're no longer useful?  To be clear, Vader doesn't go on the SSD.  That's an officer slot he could be choking through the holographic projection!

"Vader works best with cheap officers that use their abilities early" is a bit of a truism though.  Vader works best with ANY officer, the question is when you're ready to choke them out, do you think you'll still need their ability?  Cheap and already used officers make the decision easy.  (Ozzel / Needa).  Flashy and expensive officers and multi-use Commanders mean you actually have to think rather than just giving into your anger (Moff Jerjerrod / Damage Control Officer).

I mean he's just one point on a Gozanti. 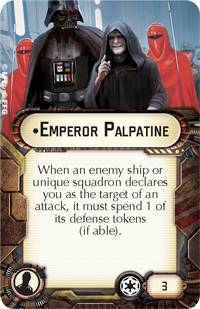 
When an enemy ship or unique squadron declares you as the target of an attack, it must spend 1 of its defense tokens (if able).

Sheev looks a bit better than he might actually be.  On one hand, it looks like it would be great to exhaust defense tokens.  But just about every ship has some redundant defense tokens.  And really he's only looking for a spot on the Super Star Destroyer, and not one of the very highly contested spots on the other Imperial ships.

He's very good if your opponent brings Turbolaser Reroute Circuits, or if you are worried about Admonition.  And he sort-of prefers second player. 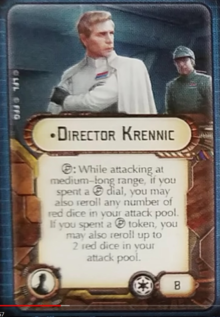 So first off the "also" suggests that the timing on this is during the spending of the Concentrate Fire command.  To review, when you perform a Concentrate Fire command you typically spend a dial and/or a token to add a die and/or reroll a die, and you do both the dial and token you can do it in either order you like, one after the other.

So when you use Director Krennic, you can again do the add or reroll in either order, but when you resolve the reroll part you have additional dice that you can reroll.

Obviously Krennic wants to be on ships with a lot of Red dice.  An Arquitens would love him, obviously, as would a Cymoon or some sort of long-range built VSD.  The SSD is an obvious choice as well.

That being said, his ability requires a command to be used, which in turn means he needs a way to use that command, either by dialing it in or by getting and spending the token.  That limits his effectiveness in lists that need other commands more than they do the Concentrate Fire.  His use will likely be limited, but when he does show up his dice will do a lot of damage.

When you are dealt a faceup damage card, you may spend 1 [Engineering] token to flip that card facedown (without resolving its effect).

An obvious Super Star Destroyer friend, especially on the Executor where you can hold multiple Engineering tokens.  Lira will protect you from the worst criticals, and may be the go-to officer over DCO if Heavy Turbolasers take off as an Anti-SSD counter.  She needs a lot of work to get her ability off, and you have to be taking hull damage and have tokens to spare that you aren't using repairing your ship, which means a lot of redundancy.

Consider her, Task Master Grint, and Engineering Dials for days on the Executor.  The 3rd officer could be anyone, but Captain Needa seems particularly useful for letting you toss away one of your much less worthwhile Contains for some long range defense. 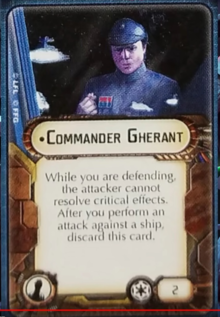 While you are defending, the attacker cannot resolve critical effects.  After you perform an attack against a ship, discard this card.

So... what use is this guy?  Probably best as a 2 point Norra insurance against getting jumped by fighters early, but you're going to lose his ability very quickly on any ship that actually wants to take him because big ships want to shoot other ships!

Still, he can save you from some Norra damage in the right matchup.

Not sure he leaves the binder quite yet though.
Incoming Transmission From: Biggs at 12:37
Email ThisBlogThis!Share to TwitterShare to FacebookShare to Pinterest
Labels: Admiral Ozzel, Darth Vader, Krennic, List Building, Officer Upgrades, Sheev, Star Wars Armada, Super Star Destroyer