Okay, okay.  Clearly I've been slacking in writing these.  Gonna hammer one of these out for every new release article I write.

Anyways, I owe some Rebel Officers. 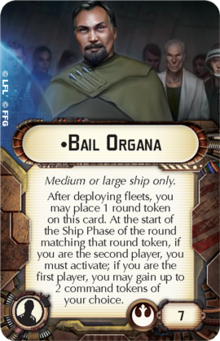 Bail is unfortunately the worst of the three "activation" cards from this wave.  Pryce giving you a "last" activation is great, and enabled "Imperial 2 Ship" to be a dominant force in the meta.  Strategic Advisor allowed the Dumpster Fire to get to 5 activations, and compete with most 5 ship builds out there while still having 4 combat ships on the table.

Bail gives you a guaranteed first activation for a single turn, as long as you are second player, and with a specific ship on a specific turn.  He's also limited to Medium and Large ships, and the Rebels aren't exactly swimming in quality splash ships for that one big activation to go off with.  You've got the MC80 Home One-Class which is certainly a big activation, but slow and hard to get into position with just Speed 2.  You've got the MC80 Liberty-Class, which doesn't have the big "oomph" of a squadron compliment to boost the value of it's big front arc.  And you've got the MC75 which requires a double arc shot to get the best result from its big activation, and also doesn't quite max out the squadron compliment like the big Imperial ships can.

Plus it means you're second player the rest of the time.  And while second player isn't terrible by any means, it does mean that you're needing to build a list that is both good at being second player while also taking advantage of one turn of being first player.  This is not easy.

He's not worthless if you're first player, adding tokens to your ship, but it's clear that his big splash is supposed to be for second player getting the first activation.

This leaves Bail in an awkward place.  He's got the potential to be a game changer with the right ship and in the right list, but the meta isn't quite in that place yet. 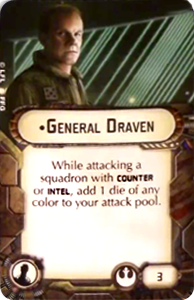 While attacking a squadron with Counter or Intel, add 1 die of any color to your attack pool.

So if Bail is in an awkward place, Draven is currently locked away in your card binder.  In theory he should be great at improving a Rebel ship's flak, which not a lot of things currently do.  The problem is he only works against the following things:

Honestly he's probably best against mirror matches letting you toss extra dice against Jan Ors / A-Wing aces.  Still he's 3 points that isn't guaranteed to be used, even against fighters.  Absolutely not worth building a ship around like his counterpart Agent Kallus is.

Frankly, he's best off staying behind until we see swarms of Interceptors / Jumpmasters showing up with Reserve Hanger Decks.

That's it for this one.  Onward to other stuff!
Incoming Transmission From: Biggs at 15:37
Email ThisBlogThis!Share to TwitterShare to FacebookShare to Pinterest
Labels: List Building, Officer Upgrades, Rebels, Star Wars Armada, Wave 7