Oh boy, there's a lot of ships that can take a Defensive Retrofit: 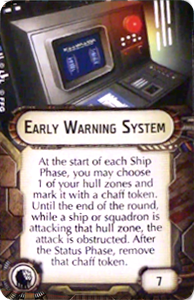 
At the start of each Ship Phase, you may choose 1 of your hull zones and mark it with a chaff token.  Until the end of the round, while a ship or squadron is attacking that hull zone, the attack is obstructed.  After the Status Phase, remove that chaff token.

That is the question that needs to be answered, and as of right now it is still up in the air.

Which is better?  Is it ensuring that your best token is available against one big attack, or that you don't take as much damage from multiple small attacks?

Really it's all about what you're expecting to face and how you position your ship's arcs.  Ships with one big arc where your opponent is unlikely to see your other arcs do get a lot out of this upgrade.  You're saving usually .75 average damage per attack with a non-modified attack (assuming Red or Blue dice).  Where it shines the most is against squadrons, shutting most squadrons out of attacking you at all in that specific hull zone unless they have a multi-dice attack.  This can actually do a decent job of simulating redirects against squadron attacks - if they can't attack you in your un-shielded hull zone, they have to hit another one (hopefully one with shields).

So, is it better than Electronic Countermeasures?

Maybe sometimes?  As it is you're pretty much picking one or the other.  EWS is better against multiple small dice and ECM is better against the big boys.  In the time of SSD's, maybe the pendulum has swung back to ECMs as the choice in defense tokens.