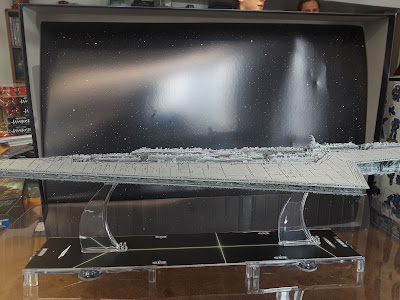 We've got our hands on it now, so let's look at how you can bring a Super Star Destroyer into the game.  We'll be starting with the "tournament legal" variants, the Star Dreadnought Prototypes.

This thing is big, and as the one and only Huge-size ship, there's a few rules you need to understand to use it effectively.  The first is deployment:  The ship is a lot larger than the deployment zone, so in order to place the ship you need to make sure that part of its base is touching the player's play are edge.  Also, squadrons cannot be deployed beyond distance 1-2 of a players deployment zone if they are also placed within distance 1-2 of the ship.  So if you are supporting a Fleet Ambush, watch your SSD placement!

Ship movement is also quite a bit different.  Instead of turning from the front of the ship, the SSD instead turns from the "back" base, which means its front will swing quite a bit with even a little bit of yaw.  It also means the "Nebulon Drift" of speed 2 with one click in either direction is not doable.  No  sliding over while keeping the same speed.

Overall, in 400 point games this ship is a HUGE set piece, costing you well over 1/2 your total fleet cost, and probably around 2/3 to 3/4 by the time upgrades are in place.  In addition, scoring rules give 50% of total point cost for dealing damage equal to 1/2 of the hull to the ship, which for the Prototype is 11 cards.  Note that this is 50% of the total point cost (rounded up) including any upgrades / commanders.  Care should be taken to prevent this from happening, in addition to preventing the entire ship from going down.

Three other housekeeping things:  The ship gets a "pass" mechanic - by taking a Pass Token it can pass its turn.  So built in Strategic Adviser - it works the same way.  Also you get 3 attacks from the ship each turn (with the usual caveats).  You also get a token every time you reveal a dial, without spending that dial.  Definitely some things you can do with all of these.

The "cheapest" SSD, the Command Prototype clocks in at a whopping 220 points.  For the cost of two ISDs, you get 2 ISDs worth of hull (22), and a lot of shields.  Specifically you get 6/3/3/2 - the ship is large enough to have 6 firing arcs, with the left and right having an "auxiliary firing arc".  This gives us 20 shields total.  The ship is no slouch in defensive tokens either, sporting 2 Braces, 2 Redirects and 2 Contains.  4 Engineering wraps up the defensive tricks, though a lack of Defensive Retrofits is a glaring hole in its total defensive package.

For speed, the ship tops out a speed 2, with no way to increase it.  In addition, none of the speeds have any yaw, meaning you will need to either navigate, or use Moff Jerjerrod in order to get any yaw and not move straight ahead.  Make no mistake, this ship is SLOW.  And not responsive, as the ship has a Command of 4, though that does mean that you can bank tokens for days.  It does have 3 officer slots though, to make some parts of your life easier.

Finally, the ship has 2 Fleet Command upgrade slots.  With its native ability to pump out tokens just by revealing a dial, this makes it a perfect candidate to run Fleet Commands. 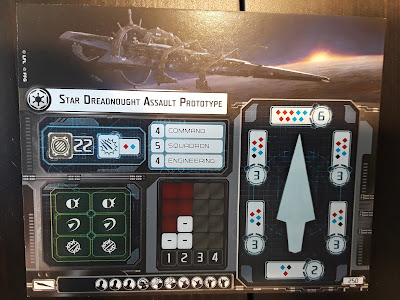 Upgrades have changed quite a bit as well.  Gone are the fleet commands, and in their place are 2 Offensive Retrofits, 2 Ion Cannons, and 2 Turbolasers.  Crazy gun combinations are yours to experiment with!

More than any other ship, your Commander is key.  Let's talk about the two "best" ones for the ship:

Grand Admiral Thrawn - Thrawn is your "does a little bit of everything" pal.  You'll be setting your Thrawn dials most likely to Navigate while you dial in Engineering commands from turn 3 onward.  Thrawn lets you turn when you need to turn, while the Engineering helps keep you alive (and perhaps as importantly, not half-dead!)

Moff Jerjerrod - Jerry lets you forget your dial - just set each one from turn 2 onward to Engineering and don't bother spinning it.  You've got enough yaw out of Jerry to get where you need to be, and the Engineering will let you recover the shields you spend to use Jerry's ability.  No SSD will move quite like a Jerry SSD.

Other viable commanders include:

Admiral Piett - One might even say he is built for the SSD.  I'm willing to call him "#3" on the list of commanders to look at.  Because you get a token with each command, you can alternate commands to always get two "full" commands off each turn, or add a token generation of some sort to be able to react as needed to problems.  He's definitely not very good on any other ship though.

Darth Vader - Look at those dice!  Look at those tokens!  Offensively, this ship craves some sort of Vader, either officer or commander.

Emperor Palpatine - Speaking of offensive commanders, Palps can help you make the most of the fact you've only got one big angry ship.  He is pricey though and you're already paying for a big expensive ship.

Other commanders really don't have a reason to be looked at for this ship at this point value, specifically don't play nice with the ISD, or are just worthless all around (looking at you Tagge!)

Title Upgrades are the next thing to look at, since it influences the flavor of the monstrosity.

Annihilator gives you a powerful anti-squadron platform, to be paired with Gunnery Teams and possibly Quad Laser Turrets, helping protect against one of your biggest problems - enemy squadrons.

Eclipse might be more of a throwaway title, forcing a face-up damage card when an enemy ship overlaps you is nice, but hardly game changing for the Imperials.

Executor occupies an interesting place, letting you bank multiple tokens, including multiples of the same token, for use later.  Probably best paired with Admiral Piett, or other token burning shenanigans like Intensify Firepower!

Finally Ravager is for those of you who want MORE DICE.  1 extra die when you use a token instead of the reroll.  Pair with other reroll abilities for maximum dice.

Finally, lets look at officers to see what kind of 3 officer combinations we can toss onto this thing.

First is Damage Control Officer (DCO).  You might as well start stapling this card to the SSD now, because it is going to be the target of everything your opponent can throw at you and being able to laugh off Heavy Ion Emplacements, Assault Proton Torpedoes, and Assault Concussion Missiles are going to be huge.

Other key defensive options are:

Captain Needa - You have plenty of defensive tokens and having a long range option would be pretty nice.

Emperor Palpatine - Hurts your opponents when they attack you.  Might only "work" once a game, but helpful when it does.

Captain Brunson - You're going to be next to some rocks with a ship this large.

Lira Wessex - Good DCO alternative when paired with Executor and a way of feeding Engineering tokens to the ship.

Commander Gherant - Not really sure he's even worthwhile.  I guess he works to protect you from getting last/first by Demo or something....  Again, DCO kinda makes him irrelevant.

Agent Kallus - Screw squadrons.  Putting 3 dice on squadrons is great when you're getting 3 shots per turn.

Darth Vader (crew) - Vader choking out your commander is hilarious, and there's plenty of shots that need rerolls.  Probably more than you have crew!  Vader can ride on a trailing Gozanti though.

Engineering Captain / Navigation Officer / Wing Commander - Sometimes you need to be SURE you can get off your exact dial, or be ready to change at a moment's notice.  A bit costly to make that happen though.

Defense Liaison - Same as above, but cheaper point cost for a token cost, and greater flexibility.

Support Officer - Here's probably where you want to go.  Not as effective against slicers, but you can fix your dials at a crucial moment.

There are other options but they are not Gunnery Team.  "But I could do Advanced Gunnery!"  No one will ever pick that and you won't have Gunnery Team for 100% of your Second Player games.

Fleet Commands - the only one really worth looking at is Intensify Firepower! with an honorable mention to All Fighters Follow Me! for a squadron alpha strike and Shields to Maximum! if you've got a token feeder.  All of them need a token feeder though (see Wolff Yularen or Gozanti / Comms Net)

Ion Cannons - SW7s for smooth hits, Heavy Ion Emplacements for spiky hits, and Leading Shots for rerolls.  MS-1s might be fun on a ship this big?

Turbolasers - Shockingly this is a place for Heavy Turbolaser Turrets, especially with Ravager and an Assault Prototype.  You can get to the 10+ damage threshold where it is strictly better than the other option easily, and if you combine it with Heavy Ion Emplacements you can force a very tricky decision in a mirror match with DCO onboard.  Quad Battery Turbolasers are another good option, because you are going to be going very slow for most of the game.

Here we have the SSD built to push squadrons, playing off of Admiral Piett.  MMJ and 3 Black Dice Bombers support the SSD, while Wulff plays the squadron token for a full command each turn and the SSD is free to navigate / repair while Piett and the Comms Net Gozanti ensure the other is available.

So this one is a bit more oomph to the ship itself.  With Quad Batteries, Krennic, and Ravager, you can get 12 dice out the front on a single target.  Heavy Turbolasers will help make sure that the hit sticks.  Drill baby drill.

This SSD is all about surviving to the end.  Thrawn lets it navigate and engineer on key turns, and Brunson, Palpatine, and DCO keep it flying in the face of enemy attacks.  Swap Agent Kallus in for Emperor Palapatine or Captain Brunson and add Annihilator to make it swat squadrons out of the sky.