So Ordnance.  There's two Ordnance Upgrades for Wave 7 and honestly it's not surprising it's taken me awhile to cover them.  They're... not great.

Ships that can take Ordnance are as follows: 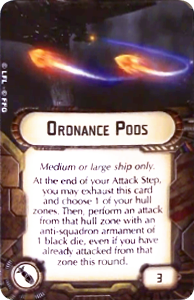 At the end of your Attack Step, you may exhaust this card and choose 1 of your hull zones.  Then perform an attack from that hull zone with an anti-squadron armament of 1 black die, even if you have already attacked from that zone this round.

This looks pretty darn good as an anti-squadron upgrade.  However, it's limited to medium and large base ships only, which locks it onto one of:  MC75 Armored Cruiser, MC 75 Ordnance Cruiser, Victory I-Class Star Destroyer, or Imperial Star Destroyer Kuat Refit.  Of these, only the Ordnance Cruiser has 2 slots and thus doesn't have that much of a competition for this upgrade slot.  There is a lot of competition for the Ordnance slot in most ships, and Ordnance Pods are typically edged out for other things like the similarly priced External Racks, or a critical effect like Assault Proton Torpedoes / Concussion Missiles.

Where this upgrade shines is in higher point games, where a 3 point insurance policy on a secondary ship isn't a horrible idea.  Both the Ordnance Cruiser and VSD can get a lot of mileage out of this upgrade.  Probably best to leave it at home for 400 point games though. 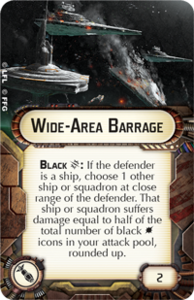 Another card that looks a lot better than it actually is.  For one thing, it splashes damage to things other than your target, which is something the other Ordnance upgrades don't do.  Splitting damage is.... not great.  Focus fire is how you drop ships after all.

The other issue is how much damage is going to be done?  The "best" use of this is with Sato and Expanded Launchers / External Racks firing out the front of the ship for 7 dice (and thus 4 damage splashed).  Pretty good, but that's a large investment of points to pull that trick off.  Let's assume Concentrate Fire dials and perfect rolls (at least one hit/crit, and every die rolling a hit).  Here's what we can do.

If you are planning on using this, or see it used against you remember that non-specific damage against a ship is dealt to one single hull zone with no chance for defense tokens to be used.  So this actually could be a useful upgrade to do things like splash dead flotilla, or to do hull damage to ships with low shields.
Incoming Transmission From: Biggs at 14:51
Email ThisBlogThis!Share to TwitterShare to FacebookShare to Pinterest
Labels: List Building, Ordnance Upgrades, Star Wars Armada, Wave 7