There's a lot of ships that can use Offensive Retrofits, but this one is large ship limited, so one should only focus on the following: 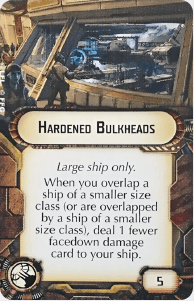 I can't speak to the design of the game, but this card was probably in development right around the time that the CRambo (7 CR90s with Engine Techs / Reinforced Blast Doors) was making its presence known, before fading into the annals of time where it belongs.  It's an upgrade that lets you use your Large ships more aggressively against smaller ships, knowing that they can't ram you for extra damage and that you can ram them with near impunity.

In practice it's a card that seems through Wave 7 to be relegated to an afterthought.  When it does see play, however, it can be a nasty surprise to an opponent who forgets that it is on your ship, usually by him getting his own ships into places they shouldn't be and then having to deal with a sudden reality that they won't be nearly as effective as he needed them to be.

Funny enough, it also works with your own ships if you need to do some emergency maneuvering to keep yourself at speed but without moving too far forward.
Incoming Transmission From: Biggs at 21:50
Email ThisBlogThis!Share to TwitterShare to FacebookShare to Pinterest
Labels: List Building, Offensive Retrofit Upgrades, Star Wars Armada