Hey it's been awhile since we've looked at upgrade cards!  I think I still owe some Wave 7 ones, actually.  Well, anyway let's look at the Super Star Destroyer Expansion commanders, Emperor Sheev "The Senate" Palpatine, and Captain Admiral Firmus Piett. 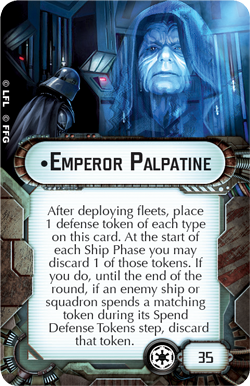 
After deploying fleets, place 1 defense token of each type on this card.  At the start of each Ship Phase you may discard 1 of those tokens.  If you do, until the end of the round, if an enemy ship or squadron spends a matching token during its Spend Defense Tokens step, discard that token.

Okay, so that's a lot of points for an Imperial commander.  Only Darth Vader and Grand Moff Tarkin cost more, and one is definitely overcosted and the other... well the Dark Lord of the Sith might be.  Sheev's big benefit is sorta locking down specific tokens for an entire turn.  But unlike Intel Officer which lets you soft lock one token of any type for one attack form a single ship giving up an officer slot (which we mostly agree is pretty darn good), Sheev does that same "use it and lose it" effect for every single type of that token on every enemy ship and squadron for every attack.

Now your opponent probably has a specific token that they are relying on for their defenses.  Evades and Redirects for small base ships.  Scatters for Elite squadrons and flotilla.  Braces for medium and large base ships, and squadrons.

Sheev is going to be best on a list with a moderate amount of 4-5 dice attacks - a list that can attack multiple things multiple times to really put a strain on defense tokens to begin with.  Consider him in a Run DMC (Run!  Double Motherfucking Cymoons!) list - putting 4 Gunnery Team long range attacks one turn, and then 4 more at medium/close the next lets you maximize the impact of your dice.

At Sector Fleet size point totals though he becomes even more scary.  Suddenly he's no longer nearly 10% of your list, but a much smaller fraction, and with more shots and more targets his ability has the chance to really shine. 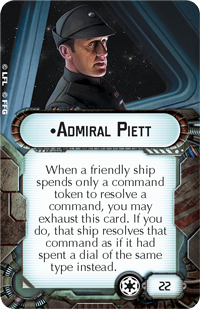 When a friendly ship spends only a command token to resolve a command, you may exhaust this card.  If you do, that ship resolves that command as if it had spent a dial of the same type instead.

Okay, so he only affects 1 ship a turn.  Well, 2 if you put him on Interdictor, but anyways...

The obvious place to put him is the Super Star Destroyer.  With a free token every turn from just revealing a dial, you can go A>B>A>B>A>B to get double commands every turn after the first.  Navigation / Engineering being the most obvious combo, but Navigation / Squadron or Squadron / Engineering would give you the option to do full squadron commands and also get one of the crucial SSD commands in as well.

Put in any token generator / savor and you've got a great activation on any turn.

It's an Imperial 2 ship, but with 3 ships instead - The Comms Net Gozanti feeds tokens to the flagship and Quasar Fire giving you more flexibility than a Grand Admiral Thrawn.  Against slicers / Cham you can prep the Squadron tokens to get your commands off without a hitch.  Against anything else, you can prep your counters on the fly.  Engineering / Navigate as needed, or even boost a ConFire into an extra die.