Okay, so again I've been a bit lazy about getting around to looking at upgrade cards like I should have back in Wave 7.  Fortunately for me, the SSD only came with new Imperial officers so I have some time to clear out my backlog now that I'm back from vacation!

Anyways, let's look at the Boarding Teams that came with Wave 7!  For a reminder, here's all the ships that can take them:

So yeah, a lot more options with the Imperials than the Rebels. 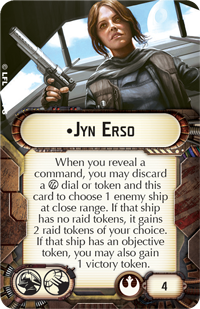 This is definitely a sleeper card of Wave 7.  It's a card that just has not seen use at all in Wave 7 and for good reason.  The "may also gain 1 victory token" part of the card isn't actually something that you can set up even as Second Player.  Instead you can only get the full benefit of this card with very specific objectives - Capture the VIP, Intel Sweep, and Blockade Run (the most fun objective).  Capture the VIP is a 50 point swing if you pop it on an opponent's ship, so cool!  Intel Sweep gives you a chance to add to your objective total, and can be a 75 point swing if you pull it off!  But Blockade Run, while the most fun objective to play, only gives objective tokens to the Second Player, so you lose the chance to both bring that objective and have Jyn Erso used to her best ability.

Plus Yellow Objectives gain Fleet In Being (15 points - all enemy ships start with 1 token), and Blue Objectives gain Hyperspace Migration (20 points - gain a token for a turn if you're next to a purrgil token).  This brings the number of Second Player Objectives that work fully with Jyn Erso to 3 Red, 2 Yellow, and 2 Blue, giving quite a number of objectives to use her with.

She's also a quiet all-star for campaigns and their Green Objectives.  I guess her raid tokens are okay too in disrupting your opponent's plans.  Look for her after Rebellion In The Rim finally comes out. 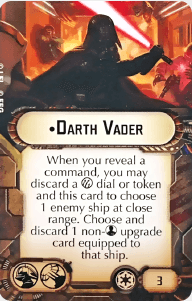 
When you reveal a command, you may discard a [squadron] dial or token and this card to choose 1 enemy ship at close range.  Choose and discard 1 non-[Commander] upgrade card equipped to that ship.

Another card you don't see all together very often.  Vader (Boarding Team) does offer quite a bit of versatility though, specifically his ability to break key parts of your opponent's strategy.  A lot of ships are reliant on specific upgrades, and Vader being able to erase those upgrades is a huge advantage.  Probably the best on a smaller ship that isn't reliant on Squadron or Engineering value to deliver a big payload.

That being said, he lacks the splash of a Avenger / Boarding Team combo, which leads to him being looked at infrequently at the top levels of play.
Incoming Transmission From: Biggs at 21:34
Email ThisBlogThis!Share to TwitterShare to FacebookShare to Pinterest
Labels: Boarding Teams, List Building, Star Wars Armada, Wave 7