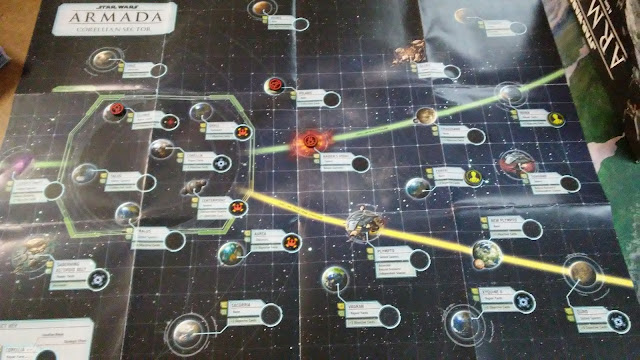 It is a time of chaos in the Corellia system.  Corellia itself might be firmly in Imperial hands, but rumors of rebellion popping up throughout the sector has caused significant consternation with Imperial forces.

Here is the story of this fight.

The Imperial forces opposing them were lead by none other than Darth Vader himself (Chris) as well as Admiral Motti (Will) and Admiral Konstantine (Chuck).

The Imperials held bases on Corellia, Duro, Xyquine II, and the Saberhing Asteroid Belt, while the Rebels were rumored to have a presence on Selonia, Drall, and Centerpoint Station - all close to Corellia within the system itself, as well as Aurea, and Corfai.  Nubia, a major hub along the Corellian Run Hyperlane, also was rumored to be supporting the Rebels.

Diplomats from the Imperial Senate arrived in the system to protect the people of Corfai and Nubia, whom were rumored to be among the Imperials first targets to be taught a lesson.  Unwilling to deal with local senators at this time, the Emperor instead ordered Vader to stand down, and make an example somewhere else.

Before he could act though, Vader was ambushed by Dodonna at Raider's Point, who had received word that an Imperial shipment was coming through, and intended to seize it for the Rebel war effort.

Vader had already ordered Admiral Motti to make an example of Selonia, where upon arriving a Rebel Outpost was found, and Rieekan was waiting.

Finally, the Rebels attempted to clear a small local garrison out of Polanis, but Sato found Admiral Konstantine waiting for him there.

Report on the Vader vs Dodonna combat to follow tomorrow.