Elimination Round - Dupy vs GhostofNobodyInParticular

Oooo!  POD#3 just finished!  Let's look at Dupy and how he matches up with GhostofNobodyInParticular. 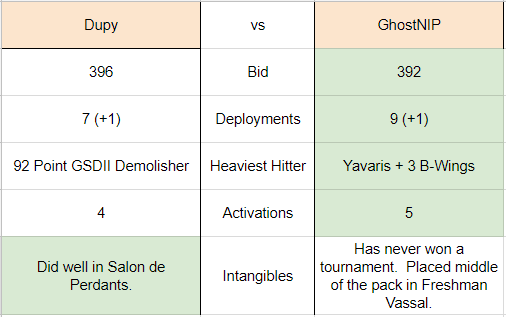 Ooof.  That's a lot of angry B-Wings in a Dodonna lead 2+3.  On paper, Ghost has every advantage going into this.  He has the bid, deployments (though nothing that really needs a late deployment), and activations on his side.

A few things tilt this somewhat in Dupy's favor.  No relay means the GR-75s need to join the fight to push the 9 squadrons around, as the AF2 and Yavaris can only shove 5 (+2 with 1st turn banked tokens) and Captain Jonus / Demo can eat the GR-75s.  Bossk and Maarek can chew through generics quickly.  Demo is even a good flak platform.  Also, Dupy has a lot more combat ships than Ghost.  It all comes down to if Ghost can get his bombers free to smash Dupy before Dupy brings his ships in to smash Ghost.

Even though on cursory glance it looks like Dupy is outclassed in every way, I think his list flies better than GNIPs and he pulls it down.
Incoming Transmission From: Biggs at 11:59
Email ThisBlogThis!Share to TwitterShare to FacebookShare to Pinterest
Labels: Admiral Ozzel, elimination rounds, General Dodonna, List Building, Star Wars Armada, Strategy, Tactics, World Cup 2018