I still can't believe I took this long to get to the Wave 6 upgrades.  We'll be through them after today though. 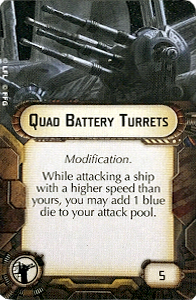 
While attacking a ship with a higher speed than yours, you may add 1 blue die to your attack pool.

So, who likes this upgrade?  The obvious answer is a ship that is going slow anyway, and wants to add Blue dice at long range.  The Victory-Class Star Destroyer, for example, can't go faster than Speed 2 and usually finds itself moving at Speed 1.  Another Speed 2 limited ships this can find a home on is the MC80 Home One Class.

Other ships can certainly find this a good damage upgrade, even if they aren't forced into going slow.  A Nebulon B for example could use this as a Shmitty-style trailing ship.  A Cymoon 1 Refit might want to slowly approach the fight while its sister ships hit up close.  The MC75 Armored Cruiser with a double arc might want to take advantage of 2 attacks, both with an added die.

Speaking of which, note that this is - if you can work out how to trigger the ability on multiple attacks - the most points efficient damage boost you can find.  5 points for a 0.75 damage increase and 1 damage ceiling increase is good, but being able to use it for multiple attacks in a single turn means it can be a 1.50 damage increase and a 2 damage ceiling.  And even if you don't get to use it, you are forcing your opponent to slow their ships down to compensate for it.  Definitely something you should be able to take advantage of in a game.

Really this is something to consider on any Turbolaser equipped ship that doesn't have a better answer in terms of increasing your damage done, or how that damage is applied, and doesn't have to keep to a high speed in order to do its job.
Incoming Transmission From: Biggs at 08:00
Email ThisBlogThis!Share to TwitterShare to FacebookShare to Pinterest
Labels: List Building, Star Wars Armada, Turbolaser Upgrades, Wave 6